Sorry, Washington: "Not Everything in the World Is about America" 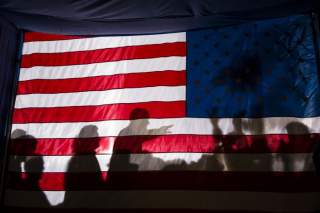 The foreign-policy meme is firmly fixed that President Barack Obama is weak and virtually every ill around the globe is a result thereof. The Chinese, Egyptians, Iranians, Russians, Syrians and assorted terrorists are all running wild and committing violent misdeeds because the administration exhibited a lack of resolve and failed to enforce U.S. dictates. The world would be quiescent if only Sen. John McCain had won in 2008 and since then had been sending American bombers hither and yon to suppress the slightest resistance to America’s will.

It’s hard for the denizens of Washington to accept, but not everything in the world is about America. People elsewhere around the globe have interests, aspirations, ambitions, and dreams. And like the obstreperous British colonists in North America more than two centuries ago, other peoples are willing to take big risks, undertake enormous sacrifices, and defy major powers in order to achieve their ends. What the U.S. president says often isn’t of much interest to foreigners, other than to antagonize and inflame.

Government and guerrilla leaders may worry more about what Washington thinks, but they judge the likelihood that American leaders will follow through on the latter’s promises and threats. And that is based far more on a perception of U.S. interests and relative costs and benefits than abstract “credibility” derived from past behavior in dissimilar circumstances.

Washington routinely promotes human rights, endorses democratic elections, advances free trade, urges religious liberty and more. In no case has America ever gone to war to enforce such pronouncements. The United States rarely settles even more serious geopolitical controversies with war. Absent a McCainesque president prepared to bomb anyone for any reason, nothing would have changed had President Obama, for instance, launched military strikes in response to Syria’s use of chemical weapons. No other country would have feared military attack for completely different reasons.

More actively backing Syrian rebels would not have caused Russia’s Vladimir Putin to treat Ukraine with loving kindness. What happens to the Damascus government matters to Moscow, but not enough to confront America. In contrast, what happens to Ukraine matters to Washington, but not enough to confront Russia, for which the issue is considered an essential matter of security. The United States might be willing to attack another largely helpless Middle Eastern state for peripheral stakes, but it won’t react the same way against a nuclear-armed great power.

The problem is not just that Washington routinely attempts to impose its will where American interests are modest at best—the Balkans, Ukraine and Syria, for instance. None of these conflicts seriously affect U.S. security and all should be dealt with most directly by Washington’s allies and friends. But top American officials are so used to cantering about the globe representing the “hyperpower,” the “indispensable nation,” the country that “stands taller and sees further,” that they unnecessarily put U.S. credibility at stake by routinely issuing proclamations better left to second-tier desk officers at the State Department.

For instance, the Obama administration organized an international spectacle with its African summit. In the midst of discussions over the future of the continent, Washington whined that the president of the Democratic Republic of Congo (DRC), Joseph Kabila, might run for reelection.

Kabila’s no U.S.-style democrat, but he’s better than his father, the guerrilla leader who ousted the notorious Mobutu Sese-Seko. Kabila is serving his second term and is thought ready to alter his nation’s constitutional two-term limit. Both Secretary of State John Kerry and departmental Special Advisor Russell Feingold spoke to Kabila, but, worried Feingold, “I did not hear any assurances from them” that Kabila would not run again. America considers the restriction irrevocable, added Feingold.

Since when is it Washington’s job to micromanage the DRC’s political system? How would American politicians react if foreign leaders insisted that the United States impose term limits on Congress or lobbied against proposals to reform the Electoral College?

However, this is but one of many indignities that U.S. officials are suffering as they attempt to reorder the globe for the presumed good of mankind. Washington Post columnist Jackson Diehl offered a list of horrors. For instance, despite American protests, the Georgian government has filed criminal charges against former president Mikheil Saakashvili and four leaders of his party. This was done even though Tbilisi “was warned repeatedly by the Obama administration” not to do so, explained Diehl.

The charges might be political as Diehl claimed, but Saakashvili was no poster child for democracy, despite his high standing with the Bush administration and American neoconservatives. Is the United States entitled to protect unseemly friends, irrespective of their guilt?

Diehl also was angered by Egypt’s ostentatious middle finger to Secretary of State John Kerry. The latter visited Cairo and spoke with dictator Abdel Fatah al-Sisi, spouting all manner of nonsense about Egypt’s strong commitment to democracy. The next day, the government announced lengthy prison terms for three journalists on transparently false charges. But the Egyptians never listened to America because Washington always could be counted on to provide aid and support: President Hosni Mubarak constructed a dictatorship; the Egyptian people overthrew Mubarak; President Mohammed Morsi failed to rule inclusively; and Gen. al-Sisi launched a coup and violated human rights more fully than Mubarak did. Washington opposed all of these actions, with no effect.

A State Department official met with opposition groups in Bahrain, a Sunni dictatorship backed by the Saudi Arabian military ruling over a Shia majority. Manama expelled him. This outraged Diehl. But the American response over the last three years has been near silence, despite government killings, torture and lengthy imprisonment of those merely protesting for democracy. After all, the Pentagon likes its naval base in the Gulf.

Aruba in the Caribbean released a Venezuelan general arrested on a U.S. drug warrant. Outrageous, indicated Diehl: “Apparently, it was considered easier to offend the Obama administration than the Chavista regime in Caracas.” Well, Venezuela is closer and has a much greater interest in protecting its leadership elite than the United States has in making yet another dubious extraterritorial grab in the name of the Drug War. If Saudi Arabia ever indicts American liquor executives for producing illicit alcohol smuggled into the kingdom, Americans might come to regret the precedent their government has set.

There’s also been a coup in Thailand over American objections. Diehl was shocked. However, it’s a replay of 2006, and of many times before that. What general would put satisfying America ahead of seizing and holding power?

So, too, Burma’s disappointing retreat from political reform. Irregular progress shouldn’t surprise anyone. The military is still in charge, if only more discreetly. It surely wants to preserve its influence even after elections are held. And the regime knows there is minimal support in America or Europe for returning to sanctions, which achieved little. Washington’s clout is small.

All of these rebuffs are different. Many reflect complex circumstances. Almost all began well before the Obama administration. Yet, argued Diehl, “An international consensus seems to have gelled that the United States can’t be counted on to uphold its commitments and red lines, even with allies; the result is a free for all that can be seen as much in the nose-thumbing of Georgia as in Israel’s high-profile rejection of U.S. diplomacy.”

But Tbilisi didn’t much worry about human-rights criticism during the Bush administration and Israel has long felt free to reject American dictates. Third World dictatorships allied with America routinely jailed opponents. The Soviet Union cared even less about U.S. opinion than does Russia.

If there’s a serious issue here, it is the frivolous nature of American demands. None of the foregoing affects substantial, let alone vital, U.S. interests. Yet Washington should “punish and deter such government” for their defiance, argued Diehl.

But the administration must consider the impact on other interests. Georgia might sidle closer to Russia. Bahrain could restrict U.S. naval activities. Aruba’s foreign policy is managed by the Netherlands, a member of NATO and the European Union. Egypt could talk nicer to the Russians and limit preferential U.S. military access to the Suez Canal. The DRC could let its people suffer more. The Thai junta would do what it already is doing—ignore Washington and play footsie with China. Burma could call for greater European support or shift back toward Beijing. What would the United States then do in response to these actions?

Shocking as it is to some in Washington, the federal government is neither omniscient nor omnipotent. Americans don’t always know best; U.S. officials sometimes want other countries to do stupid things. Equally as often, Washington has no way to enforce its desires, or at least no way to do so without sacrificing more important interests elsewhere.

President Barack Obama’s foreign policy doesn’t impress. But not for lack of “will” or “credibility.” America has never been very good at micromanaging other nations’ affairs. Washington would do better to rein in its ambitions and abandon its quixotic quest to engage in social engineering around the globe.