South America Overlooks Chinese Illegal Fishing at Its Own Peril 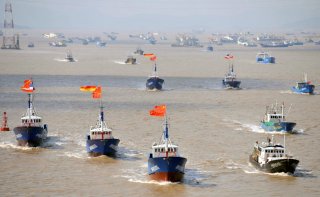 On July 16, 2020, the Ecuadorian Navy detected a fleet of approximately 250 Chinese-flagged fishing vessels just outside the Exclusive Economic Zone of the Galápagos Islands. The fleet continued to operate for several weeks and, for periods over eight hours, the ships turned off their legally required localization systems. Naturally, different actors in the region raised suspicions over these apparently illegal activities. This was not the first time South American states dealt with alarming cases of illegal, unreported, and unregulated (IUU) fishing on their coasts.

However, the event in the Galápagos was particularly disturbing and acted as a spark for the international community. The Islands are a unique territory considered a World Heritage Site by the United Nations Educational, Scientific and Cultural Agency (UNESCO). Most importantly, it is likely that the deepening of U.S.-China competition is also playing a critical role in the increasing view of IUU fishing as a threat to the region’s national security. Shortly after the incident in the Galápagos, the United States Southern Command (USSOUTHCOM) expressed firm support for Ecuadorian efforts against illegal fishing. Two weeks later, then-Secretary of State Mike Pompeo criticized the Chinese government and demanded it enforce a transparent zero-tolerance policy on illegal fishing.

Since then, different regional actors have been increasingly focused on IUU fishing. Furthermore, the United States supported specific initiatives aimed at strengthening the patrolling capacities of national governments. IUU fishing was traditionally discussed as an economic and environmental problem; now, it is also being framed as an irregular security threat. So, is IUU fishing a threat to national security in South America? If so, should the People’s Republic of China (PRC) be held accountable? Or is the United States exaggerating the problem to counter China?

The fishing industry is a vast and growing economic activity. While in 1920 it captured and produced barely over 20 million tons, in 2018, the number had grown to 180 million. Consequently, IUU fishing, the illicit counterpart of the fishing industry, is also growing. It is estimated to generate between $10.5 to $36.4 billion and represents approximately 14 to 33 percent of the total fish capture. While law-abiding companies comply with numerous regulations that ensure sustainability, workers’ rights, and fair competition, vessels that engage in IUU fishing do not. As its name suggests, illegal, unreported, and unregulated fishing acts in violation of the United Nations Convention on the Law of the Sea (UNCLOS).

Under the convention, nations are responsible for keeping track of their ships and ensuring they abide by domestic and international laws. While distant water fleets (DWF) might not be operating under the direct orders of their nations, their respective governments are legally responsible for their actions. The convention, known as the “Constitution of the Sea,” establishes the jurisdiction of sovereign nations over their Exclusive Economic Zones (EEZ), which extend up to 200 miles from the mainland. Within that territory, only the respective sovereign state can rightfully manage and exploit the natural resources through local companies or by licensing foreign actors. IUU fishing usually takes place right along the border of the EEZ. Vessels operate by staying in international waters and, occasionally, penetrating the EEZ, violating the nation’s sovereignty.

Traditionally, domestic and international actors emphasized the economic threats of IUU fishing. However, states and NGOs are starting to be concerned about other aspects of this phenomenon. Observers of IUU fishing are not only concerned with the loss of revenue but also the damage to the ecosystem, the livelihoods of local fishermen, and the violations of human rights.

Moreover, the recent claim of IUU fishing as a national security threat is probably the most relevant aspect of this issue. IUU fishing threatens national security by directly engaging with the trafficking of wildlife, narcotics, and people. Additionally, it creates a more fertile ground for organized crime by affecting local economies and food security. A study conducted by the United Nations Office on Drugs and Crime in 2011 presented disturbing conclusions. First, distant water fleets often rely on forced labor. Most importantly, the study found that fishing vessels are used as mother ships for smuggling drugs and arms.

The U.S. Coast Guard now claims that “illegal, unreported, and unregulated (IUU) fishing has replaced piracy as the leading global maritime security threat.” Even though the Coast Guard recognizes that Taiwan, Japan, South Korea, and Spain are important perpetrators of IUU fishing, its 2020 Strategic Outlook dedicates a specific section to address “concerns with China’s fishing practices.” The piece states that their distant water fleets, together with the People’s Armed Forces Maritime Militia, carry out aggressive behavior on the high seas “in support of the Chinese Communist Party’s long-term maritime strategic goals.” Moreover, it demands that China control its vessels that violate the rules-based international order.

Consequently, it was no surprise when in January 2021, USSOUTHCOM and the U.S. Coast Guard launched Operation Southern Cross. Even though countries in the region had been trying to coordinate responses against IUU fishing through actions like port regulation agreements, the joint operation was a novelty. For the first time in recent history, a Coast Guard ship participated in cooperation exercises in the South Atlantic against IUU fishing. The original plan included the visit of the USCG Cutter Stone to Guyana, Brazil, Uruguay, and Argentina.

Despite the initial plan, Operation Southern Cross became a perfect example of the geopolitical tensions between China and the United States in South America when the Coast Guard had to cancel its visit to Argentina. The official explanation from the U.S. government was that technical problems related to the depth of the water off the coast of the city of Mar del Plata did not allow the vessel to enter the port. However, reports in the Argentine media pointed out that the reason behind this change in plans was that the Fernández-Kirchner government, which has a very close relation with Beijing, wanted to avoid tensions with China. The relevance of this controversy became evident when former President Mauricio Macri criticized the decision and the association of the local shrimp industry spoke of “carnal relations” between the government and China.

Although Operation Southern Cross finished in March 2021, it won’t be the last of its kind. Admiral Craig S. Faller, Commander of USSOUTHCOM, stated that IUU fishing is one of the “top three, if not the top” security concern of the countries in the region and that it will use the momentum around IUU fishing to push for concrete actions.

The increasing global concerns with IUU fishing are justified. However, is the PRC threatening national security in South America through its distant water fleet as USSOUTHCOM suggests? A closer look at the available data can shed light on this question.

Regarding China’s responsibility, it is true that it is the biggest perpetrator of IUU fishing, with the largest distant water fleet in the world. According to most estimates, it has around 3,000 vessels. However, the Overseas Development Institute claims that the actual number is 17,000.  While China is an undisputed IUU fishing actor, it is not the only one. Taiwan, South Korea, and Japan are also big players, each accounting for at least 10 percent of the total IUU fishing. Although the United States mentions the role of other countries engaging in IUU fishing, it overwhelmingly emphasizes China, suggesting that great power competition is a critical aspect of the concern over this issue.

From a global perspective, the recently developed IUU Fishing Index is helpful to compare South America to other regions in the world. This index measures how vulnerable countries are to IUU fishing and how capable they are to counter it. When comparing regions, Asia and Africa are the most affected ones. South America only comes in fifth place. This information appears to be consistent with the idea that while IUU fishing in the region is troubling, it is small compared to other areas.

When analyzing the national defense and security strategies of the coastal countries of South America, IUU fishing does not stand out as a top threat. It is notably absent in Argentina’s 2019 National Security Strategy, as well as with Chile’s and Peru’s Defense White Papers, published in 2018 and 2006, respectively. Not surprisingly, the anomaly is Ecuador, whose 2018 White Defense Paper mentions IUU fishing eight times. However, it might be possible that future national security strategies could place a more significant emphasis on IUU fishing because regional concern heightened after the 2020 incident in the Galápagos.

There is no doubt that illegal, unreported, and unregulated fishing is a challenge for the global community. Its dangers to the environment, the economies, and countries’ sovereignty are deeply concerning. In South America, IUU fishing appears to be a rising concern for states, which are starting to organize regional responses. However, analyzing it outside the context of great power competition between the United States and China would be incomplete. In a region historically known as “America’s backyard,” it is evident that the U.S. government sees IUU fishing as an issue where it should counter China and its significant influence in the region. While South America is still not as vulnerable to IUU fishing as other regions, probably due to its distance from Asia, that could change in the future as the worldwide demand for fish increases. If that is the case, U.S.-led initiatives like Operation Southern Cross might become much more frequent.