South Korea Is the Junior Partner in the North Korean Crisis 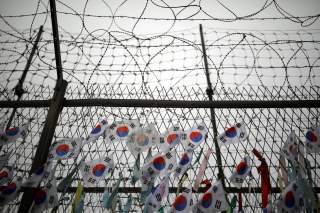 North Korea has been dominating international headlines. Journalists have breathlessly reported on the possibility of nuclear war. Death and destruction appear to be just one missile launch away.

And it’s been all about America.

Yet the country that should be most concerned about events in the Democratic People’s Republic of Korea (DPRK) is South Korea. The peninsula was divided seventy-two years ago, after Japan’s surrender in World War II. Mass refugee flows left numerous families separated at the end of the Korean War in 1953. Reunification remains the formal objective of Seoul. Many residents of the South view those in the DPRK as long lost, if slightly misguided, brothers and sisters.

Moreover, before developing ICBMs Pyongyang was only able to threaten the Republic of Korea (ROK). By stationing troops on the peninsula and in nearby nations, Washington provided North Korea with convenient targets. But South Korea was uniquely vulnerable. The North’s forces were spring-loaded forward, ready to roll south. If war erupted, the ROK, not America, would be the battlefield.

The South also suffered disproportionately over the years when the Korean cold war occasionally turned hot. American military personnel occasionally died, and the USS Pueblo was seized in 1968, but the ROK suffered actual attack. For instance, in 2010 the North sank a South Korean corvette and bombarded a South Korean island, killing sailors and civilians. Over the years the DPRK is thought to have abducted South Koreans, as well as Japanese citizens, and held many of the ROK fishermen it detained over the years.

Today Pyongyang’s development of nuclear weapons most threatens the South. North Korea’s arsenal is filled with short-range missiles capable of carrying chemical and biological weapons and presumably any nukes that have been miniaturized. The threat is real, not potential. Abundant artillery also threatens Seoul, the South’s political, industrial and population heart. The DPRK just might be able to make good on its threat to turn South Korea’s capital into a “lake of fire.”

Finally, the North’s future development is of vital interest to the ROK but of only marginal relevance to the U.S. liberalization or reunification would offer Americans greater economic and travel opportunities, but little more. What Washington most wants from North Korea is to end of any military threats. For the South, the DPRK’s future could be transformational. A united, democratic, capitalist Korea would be a significant player in Northeast Asia. Domestic life would change even more dramatically.

Yet Seoul is but a bit player in the ongoing Korean drama. President Donald Trump is threatening “fire and fury.” U.S. officials are attempting to moderate and explain the U.S. position. American military forces would be called on in any conflict. Advice from around the globe pours into Washington on how to deal with the North. Those living in Northeast Asia have become even more desperate than Americans in attempting to divine the hidden meaning behind the latest tweet from the U.S. president. In contrast, no one much cares what South Korean President Moon Jae-in thinks.

It isn’t for wont of trying. He long has supported restarting the “Sunshine Policy” of engagement with the North, implemented by the last left-wing president, Roh Moo-hyun, for whom Moon worked. Since being elected in May, President Moon has pressed for talks with the Kim regime. But the phrase “can’t get no respect” might have been coined for him.

One problem is President Trump, first breathing fire weeks ago while threatening to send an “armada” off of North Korea’s coast. Moreover, the Trump administration was emphasizing sanctions rather than negotiations. While preparing for his June summit with President Trump, the South Korean leader claimed that there were no differences between the two. It brought to mind President Bill Clinton’s discussion of “what your definition of is is.” In the case of the ROK it depends on how to define “differences.”

President Moon’s second problem is the North. It dismissed a succession of South Korean proposals as “insincere,” deceptive, sophistry, and “nonsense.” When I visited Pyongyang in June officials with whom I spoke denounced the “puppets” in the South. For North Korea, only Washington really matters.

But South Koreans shouldn’t be surprised at the lack of respect. They have turned responsibility for the Korean peninsula over to the United States. Washington views the ROK as a junior partner. And the North considers Seoul’s opinions as irrelevant. Even the Moon government recently was reduced to celebrating the Trump administration’s promise not to spring any surprises on the ROK, or “catch the South off guard,” as reported by the New York Times. The only question is whether President Moon is fooling his people or deluding himself. Who imagines President Trump living up to a pledge not to surprise and shock his own aides, let alone foreign officials?

South Korean presidential spokesman Park Soo-hyun said the two governments agreed to “coordinate with each other closely and transparently.” That’s not the issue, however. Washington might be transparent, but only in telling the ROK what to do. The United States has plenty of alliances; however, it never treats them as agreements among equals. Rather, American officials view other states as supplicants for the simple reason that they almost always are supplicants.

The “Mutual Defense Treaty” between the United States and South Korea was never really “mutual.” There wasn’t even the pretense of equality when the pact was inked in 1953. The ROK was a wreck and could only survive with America’s support. Even today Washington provides the big guns, including nuclear weapons. And the South continues to insist that America maintain wartime direction of the former’s forces, an extraordinary concession of sovereignty. Nevertheless, Washington is interested in going to war only when necessary for America’s, not South Korea’s, interest.

The DPRK also understands that its future depends on policies in Washington, not Seoul. If there is to be war, the decision almost certainly will be made by America, not South Korea. If Pyongyang is to win acceptance as a nuclear power, the United States will make the decision. If the North is to break out of its isolation and end its debilitating dependence on China, America must drop what DPRK calls the latter’s “hostile policy.” It isn’t even obvious that Seoul has much ability to convince President Trump to act one way or another.

It isn’t easy to live so close to danger knowing that one’s defense depends on another nation. As the risks rise—absent a miracle, eventually the North will be able to target American cities with nukes—U.S. interests will dictate that Washington back away, leaving the ROK vulnerable. It is one thing to defend Seoul if the cost would be largely confined to military personnel fighting over there. But if the price includes the possible destruction of American cities, then the U.S. president, any U.S. president, would be obligated to drop the alliance.

Thus, it would be best for the ROK to step up now to take over responsibility for its conventional defense. Populous and prosperous, the South should augment its military, accept wartime responsibility for its forces, and send U.S. troops home. The South Korean people should decide their security, not leave it to officials and bureaucracies in other lands.

Seoul also should engage in a serious debate over nuclear policy. Do South Korean officials believe there is much chance of stripping away the North’s nuclear capabilities? If not, is the ROK government prepared to trust its nation’s future to an American “nuclear umbrella” which will fray ever more rapidly as Pyongyang enhances its nuclear arsenal? While there are good reasons to oppose the spread of nuclear weapons, in Northeast Asia nonproliferation operates a bit like domestic gun control: only the bad guys, in this case China, Russia and North Korea, have the bomb. Everyone else wants Washington’s protection, which is least likely to be maintained when it is most needed.

Seoul taking back control of its own security would have the additional advantage of forcing both the United States and North Korea to treat the South as an equal. The ROK would possess the military means to ignore Washington and punish the DPRK, if necessary. Neither ally nor adversary could take South Korea for granted any more.

The North’s Kim Jong-un has moved both America and the South into a new, less certain world. Le’ affaire DPRK affects the ROK even more than the United States. South Korea should use the current crisis as the opportunity to take charge of its future.