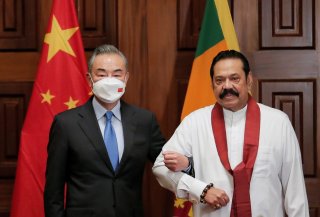 Since last month, the Yuan Wang 5, a Chinese satellite-tracking vessel, has been slowly sailing from Chinese waters to the Hambantota Port on the southern tip of Sri Lanka. Just months ago, when Sri Lanka was still under the leadership of the Rajapaksas, a political family that had ruled the Sri Lankan ethnocracy for almost two decades, allowing the 730-foot-long Chinese naval ship into port would not have generated as much attention. However, with the small island state suffering its worst economic crisis on record, its indebtedness to Beijing an economic albatross around its neck, and geopolitical tensions between India and China increasing, the ship’s arrival generated plenty of alarm.

Both the Indian and U.S. governments had strongly pressured Colombo to revoke Chinese access to the port, which infuriated the Chinese. At first, Sri Lanka’s Foreign Ministry bowed to that pressure, stating that it “wished to reaffirm the enduring friendship and excellent relations between Sri Lanka and China.” India had worried that the vessel had the capability of spying on Indian military establishments in the area.

But Colombo quickly reversed course and allowed the Chinese vessel to dock for “replenishment” purposes starting on August 16, reigniting concerns over Chinese influence over Sri Lanka. The reversal is a blow to India and raises security concerns and new questions about trust in bilateral relations between India and Sri Lanka. Mahinda Rajapaksa, who first gained power in 2004 and concluded a long civil war by defeating the Liberation Tigers of Tamil Eelam (LTTE), first began courting Beijing as a way of generating domestic legitimacy. A military relationship began slightly earlier, with Chinese weapons playing a hand in the LTTE’s defeat. Chinese economic assistance to Sri Lanka, mostly through loans brokered by Chinese banks, increased exponentially. Between 2005 and 2012, China provided more than $4.7 billion in economic assistance to Sri Lanka, with 98 percent of that coming in the form of loans.

The docking of the Yuan Wang 5 wasn’t the first provocation to anger India. In 2014, two Chinese vessels, a submarine, and a warship docked at a Chinese-built container port in Colombo. The increasing intensity of Chinese military vessel visits to Sri Lanka has kept India on edge, further eroding relations between two countries that have strong historic cultural and ethnic ties. India also strongly objected to an aircraft maintenance facility being planned in 2014 by Sri Lanka and a Chinese aviation company.

However, this time the docking of the Chinese ship at a Sri Lankan port had two different contexts. First, it happened in the backdrop of altered India-China relations. A persistent conflict at the Line of Actual Control with India has put China in a much different bracket. Sri Lanka, of all countries, is well aware of the tenuous relations between New Delhi and Beijing. Second, India’s decision to firmly stand with Sri Lanka during its ongoing financial crisis, without any expectations, should have nudged Sri Lanka to acknowledge and respect India’s strategic concerns.

Yet, from Sri Lanka’s standpoint, it is understandable that a country reeling under unprecedented financial stress would be forced to comply with Chinese pressure. The fact that the Hambantota port is already under Chinese functional control explains Colombo’s inability to stop China from strategic arm-twisting. The Chinese now control the critical Hambantota port after it was given a ninety-nine-year lease. Ranil Wickremesinghe, who was prime minister at the time, promised India that the port would not be used as a Chinese military base.

China still holds significant leverage in terms of the ability to restructure or forgive some of Sri Lanka’s debt. Debt relief is a key objective of the new Wickremesinghe government, which seeks a bailout from the International Monetary Fund (IMF). With renewed Chinese military engagement with Sri Lanka, India’s long-held fears that the deep-water port could evolve beyond mere replenishment, but a naval resupply point, a fear that Wickremesinghe, who was also prime minister in 2018, denied.

For India, the circumstances provided two lessons. First, India had to be careful not to overplay its hand in Sri Lanka, given delicate relations over ethnic Tamil ties and a history of military intervention during Sri Lanka’s long civil war. India has built on its relationship with Sri Lanka through generous financial assistance. Second, it forced India to prepare instead of merely applying pressure. India had reportedly put up a satellite shield against the Chinese ship before it docked at the Sri Lankan port. India also deployed four satellites and a warship to preemptively counter security threats from the Yuan Wang 5. To thwart potential threats, India also deployed two GSAT 7 (Rukmini) satellites, considered as the Indian Navy’s eyes in the Indian Ocean, an RI SAT (Indian Radar Imaging Reconnaissance Satellites) for providing all-weather surveillance, an Emisat reconnaissance satellite developed by India’s Defense Research and Development Organization (DRDO), as well as a communication warship in the Arabian Sea.

The incident underscored two important geopolitical realities playing out in the Indo-Pacific region. Despite their reluctance, small states will get drawn into great power politics, most often in their dependence on or attraction to China. The Indian Ocean is also becoming a central theater in the Indo-Pacific. In this space, India’s capacities and decisionmaking will be tested, despite its embrace of an Indo-Pacific policy that aligns with Western strategy.

After consolidating its position in the Pacific theater, China is now visibly focused on the Indian Ocean in its efforts to counter a Western joint Indo-Pacific strategy. As the war in Ukraine and U.S.-led efforts to push China on Taiwan carve deeper divisions between nations, China’s efforts to derail a Free and Open Indo-Pacific will drive greater competition. Small states like Sri Lanka, evidenced here, will be caught in the middle.

Mark S. Cogan is an associate professor of peace and conflict studies at Kansai Gaidai University based in Osaka, Japan, and a former communications specialist with the United Nations.

Vivek Mishra is a Fellow with the Observer Research Foundation. His research interests include America in the Indian Ocean and Indo-Pacific and Asia-Pacific regions, particularly the role of the US in security in South Asia, Indo-US defense relations, and the Indian defense sector.