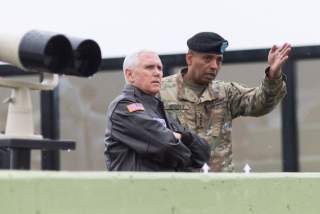 It’s been barely three months, and already I’m starting to miss Barack Obama. Even worse, I’m pining for Hillary Clinton. Neither one of them would have so dramatically botched dealings with North Korea.

True, there’s no easy answer to Pyongyang’s challenge. The isolated Communist monarchy might have enough nuclear materials to construct twenty or so weapons. We don’t know what it can deliver where, but we can’t discount the possibility that the North can hit South Korea, Japan and U.S. bases in the region. Moreover, North Korea’s arsenal is only going to expand in the years ahead.

So with great fanfare, the Trump administration announced that the policy of “strategic patience” was over. Okay. But officials offered nothing in its place. Strategic impatience, apparently. To what end, one wonders?

The president put great emphasis on getting China to “solve” the problem. If Beijing didn’t do so, he proclaimed, America would do the solving. But the president soon admitted that he had little understanding of either the problem or the solution.

Absent an invasion, which is a tad unlikely, the People’s Republic of China cannot simply halt North Korea’s nuclear and missile research. What the PRC can do is apply economic pressure, cutting off trade, especially in food and energy. However, Pyongyang could choose to accept the consequences and continue with its current policies.

The human cost would be high, but mostly for folks already at the bottom of the human heap. During the late 1990s, hundreds of thousands of North Koreans starved to death. The regime, headed by the present ruler’s father, stayed on course, pursuing nuclear weapons, rejecting economic reform and maintaining political control. The current regime might similarly survive.

The president and his aides intimated that military action was just around the corner. Pyongyang must “behave,” it was said. All options are on the table, intoned various officials. A carrier battle group sat off North Korea’s coast while the president said he was sending an (it turns out, nonexistent) “armada” to monitor the Democratic People’s Republic of Korea.

After that buildup, nothing. Vice President Mike Pence stood at the DMZ and peered northward, making a stern face for Kim to see. Then he came home. And everyone started thinking about other issues.

It actually has the feel of an Obamaesque red line. President Trump huffed and puffed, but didn’t blow the house down. Instead, he exhaled and walked away. The next time the administration revs up the threat machine, the DPRK is going to pay less attention. After all, strategic impatience might not end up looking that much different than strategic patience after all.

Results might have been better had the president known something about the subject. One can forgive him for being largely ignorant of the complexities of the issue when he ran for office—believing that China “controlled” the North, for instance. But he apparently wasn’t briefed before his summit with Xi Jinping, the president of China. How else to explain President Trump’s comment that only after his counterpart explained the subject did he realize how complicated it was?

He lost a great opportunity to negotiate with Xi. President Trump did dramatically put the North Korean issue to the Chinese government. However, Beijing has good reason to avoid doing America’s bidding. As noted earlier, even applying bone-crunching economic sanctions might not bring “Young Marshall” Kim Jong-un to heel. Then the PRC would have ruined its relationship with the North for nothing.

Or the Kim regime and North Korean state might collapse, unleashing a deluge of refugees across the Yalu, triggering factional fighting and military combat, and loosing nuclear materials to states and groups. Before taking such a risk, the Chinese government might appreciate a U.S. promise to aid the PRC in coping with the consequences.

Moreover, while Washington would welcome a reunited Korea, Beijing would not, especially if the Republic of Korea retained its military alliance with America and continued to host U.S. troops. In effect, the PRC would be aiding its own military containment. Here, a few assurances from Washington and Seoul also might help—that, for instance, U.S. forces would return home after reunification and a new, enlarged Korea would follow a policy of military nonalignment.

Finally, if the Trump administration is going to ostentatiously, if not entirely convincingly, threaten war, it should offer a peaceful alternative to surrender. Attacking the DPRK very likely would trigger a horrendous war in which hundreds of thousands or even millions of people would be killed, injured or displaced. That ugly reality undermines the credibility of the threat. Certainly war should be a last resort.

The best reason to make the threat is to convince Pyongyang to come to the negotiating table. Yet Vice President Pence declared that “all of those negotiations and discussions failed, miserably,” so there was no reason to talk. The plan now is to bring sufficient pressure on the North, primarily through China, to force the North to abandon its missile and nuclear programs. And if that doesn’t work?

“We are going to achieve the end of a denuclearization of the Korean peninsula—one way or the other,” said the vice president. But again, how? With military action? If forced to choose between war and surrender, surrender which the Kim regime might view as the equivalent of war, just under less favorable circumstances (think Libya!), Pyongyang might choose the first. If Washington ends up only bluffing, however, another dead end would be reached. And administration credibility would be in tatters.

The greatest irony may be that the more Washington threatens, even if its warnings turn out to be empty, the stronger the case becomes for the North to develop long-range missiles capable of hitting U.S. targets. How else to deter the superpower from yet another exercise in regime change? Obviously the DPRK has other reasons for desiring a nuclear arsenal, but the price for yielding it can only grow to the extent that it genuinely fears U.S. military action.

It was evident during the campaign that President Trump put a high value on bluster. So apparently do his appointees. Unfortunately, huffing and puffing won’t solve the North Korea problem.

The president still has time to return to some of his campaign ideas, such as being willing to talk to Kim Jong-un. It turns out that candidate Trump unscripted is more sensible than President Trump programmed. If he doesn’t rediscover his voice, his foreign policy will be no more successful than that of his predecessor. And America could find itself in a flurry of wars, including Korea. There would be no quicker way to wreck his presidency.

Doug Bandow is a senior fellow at the Cato Institute and former special assistant to President Ronald Reagan. He is the author of Tripwire: Korea and U.S. Foreign Policy in a Changed World and coauthor of The Korean Conundrum: America’s Troubled Relations with North and South Korea.