Syria: Why Russia Went In 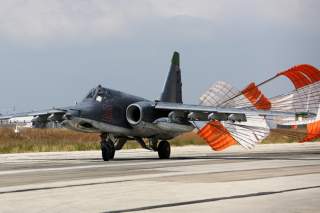 Why is Russia going into Syria? Andranik Migranyan, a prominent foreign-policy expert with connections to the Russian government, offered his thoughts to a small gathering at the Center for the National Interest on Monday night. Putin’s decision to intervene, said Migranyan, was win-win for him: if the Russian attacks succeed, he’s shown leadership; if they fail, the intervention will have killed lots of bad people, to the world’s benefit, and the blame for the failure will still rest mainly on the United States and its coalition for not cooperating with Russia.

Putin has several goals in intervening, said Migranyan: to strengthen Assad; to support the ground forces of Syria, Iran and Iraq as they prepare a “counteroffensive”; and to address the problem of Russian and former Soviet extremists who are fighting in Syria and may return to cause chaos.

Putin’s initiative takes place in a broader context, said Migranyan, which set it up: meetings with Egypt’s Abdel Fattah el-Sisi, Iran’s General Qassim Suleimani (Migranyan referred to American press reports when asked if this was confirmation that the meeting had taken place), Israel’s Benjamin Netanyahu, Turkey’s Recep Tayyip Erdogan, Palestine’s Mahmoud Abbas, and (through representatives) Iraqi leaders. At the same time, argued Migranyan, the refugee crisis in Europe and the hearings in the US on aid to the Syrian opposition showed the failure of the Western response and the lack of serious, moderate alternatives to Assad. Migranyan said that when there is a vacuum in the international system, someone will fill it; in this case, Putin, who thus has become the only real leader acting on the world stage.

Still, the Russian intervention, said Migranyan, is not against U.S. interests. The United States does not want ISIS and jihadists to advance. Sunni allies of the United States like Saudi Arabia, the Emirates and Qatar, he argued, are the real problem—they are “practically financing” and “stimulating” what he called “radical jihadists.” And the Russian view of who among the opposition is a terrorist, he said, is broad—the current policy line is that “everybody must be killed over there who is fighting Assad,” because the opposition only includes “very few, marginalized moderate Islamists.”

Migranyan also criticized suggestions that a broad coalition between Russia and the West in Syria would be interpreted as a war against Sunnism. He argued that support for intervention from Turkey, Egypt and Islamic leaders in Russia showed that “traditional Islam” is against those Russia is fighting.

Putin’s intervention, said Migranyan, also revealed the failure of two different Western policies: that of isolating and punishing Russia, and that of insisting Assad must go as a precondition of a solution. Even so, said Migranyan, Russia is ready to negotiate on Assad, even though his removal cannot be a precondition. Migranyan suggested that there is continuity between this and Russia’s policy in the early days of the conflict—Moscow had proposed a negotiated transition, but the proposal did not move forward, and as jihadists began to advance the position hardened—Assad had become the “lesser evil.” The present intervention, he argued, is not intended as support for Assad, but as an effort to preserve endangered Syrian statehood; once this goal has been secured, he said, the focus can shift more squarely to “eliminat[ing] all these radical forces over there.”

Migranyan also criticized comments calling for a tougher line on Russia’s role in Syria from a number of presidential candidates and members of Congress. Proposals like these, which have included a no-fly zone over Syria, originate, he said, from people who are trying to “earn some points”; Migranyan said it was “encouraging” that officials at the Pentagon aren’t talking the same way. He pointed to remarks by President Obama, who had accused critics of his Syria policy of offering “mumbo jumbo” and, when asked about Hillary Clinton’s endorsement of a no-fly zone, had said that “there’s a difference between running for president and being president.” Migranyan echoed that those on the campaign trail “can say anything.” However, Migranyan said, the discussions highlight that Washington has not yet made a strategic decision about Russia’s role in Syria or the extent to which it would cooperate with or confront Moscow’s military operations.

Some in audience greeted Migranyan’s remarks in favor of Russia’s actions with skepticism. Jacob Heilbrunn, the editor of The National Interest, suggested that Russia is marching into a potential “morass.” Others did agree with Migranyan to the extent that Putin indeed appeared to outmaneuver Obama, doing damage to U.S. credibility in the process.