On Terror, Obama Offers a Speech without a Strategy 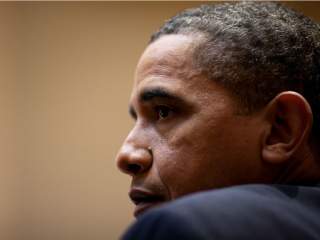 President Obama’s Oval Office address on Sunday evening offered little that was new in terms of a strategy to contain the Islamic State, much less defeat it. The president was at great pains to point out that America was not at war with Islam—no serious American leader would say that it is, and would-be leaders such as Donald Trump are not serious. As for the war with the Islamist terrorists, a term the president steadfastly refuses to use, all Obama could offer was another hundred or so special operators and an increase in air strikes.

As a practical matter, increasing air strikes should not be too hard: as of mid-November, the United States was averaging just under seven strikes per day. As for land forces, Obama clung to his fallacious assertion that any serious increase in American troop strength would result in another Iraq-like quagmire; sending a brigade-sized force to Syria would make a significant difference to the fighting effectiveness of anti-IS forces, but would hardly result in a duplication of America’s travails in Iraq, or, for that matter, Afghanistan.

In correctly pointing out that IS was a novel threat to America, Obama neglected to add that it was not the only threat the United States faces today. Indeed, perhaps for the first time in its history, America confronts new and major challenges in three separate parts of the globe: in Europe, from Russia; in Asia, from China (as well as a long-standing threat from North Korea); and, of course, from the Islamic State in the Middle East. In seeking to reassure Americans that they remain secure, the president could have outlined not only a strategy for combating IS, but one for deterring aggression on the part of Beijing and Moscow as well.

In the case of both China and Russia, deterrence does not mean active hostility. China is a major American trading partner, as well as a holder of considerable American debt. Russia could, and should, be a partner in bringing the Syrian civil war to an end and in defeating the Islamic State, and it holds the key to any settlement in Ukraine. Yet both also pose formidable challenges to American security and that of its allies and friends: China in the East and South China Seas, and Russia with respect to the Baltic states in particular and NATO in general. Only a revitalization of American posture abroad can provide the credibility of both an American deterrent and the promise of American partnership that governments around the world feel is currently lacking.

To upgrade America’s defenses, however, requires an injection of funds that the administration only theoretically calls for. For years, Obama has been treating the Department of Defense as if it were just another agency, required like all other major and minor government agencies to contribute its “fair share” to reducing the deficit. And he has steadfastly refused to exempt defense from the sequester, unless the cap on non-defense programs is lifted as well. The notion that the threat to American interests should determine the size of the defense budget appears to have escaped the White House for the past seven years. It is therefore unsurprising that administration officials are already warning that the Fiscal Year 2017 budget will involve reductions in badly needed weapons modernization and development funds, even with a recently approved budget compromise that raises sequester caps for the next two fiscal years.

Washington’s inability (and the administration’s unwillingness) to put an end to the nearly decade-long decline in American force posture and its military presence overseas has undermined American credibility abroad. Absent that credibility, it is exceedingly unlikely that other states, particularly moderate Arab states, will join the fight against IS in any serious way. The combination of what many in the Middle East, and not only in the Middle East, perceive as American perfidy regarding the fates of Hosni Mubarak and Muammar Qaddafi, together with Obama’s steadfast refusal to commit a credible force to the fight against IS, has led Gulf Arabs in particular to turn a deaf ear to the administration’s pleas for greater participation in that fight.

It is not enough for Obama to stress that America is not at war with Islam; everyone knows that by now. It is far more important for America to act as if it is indeed at war. A few Special Operators combined with two handfuls of daily air strikes do not constitute a major operation, much less a “war.” Obama’s refusal to contemplate a safe harbor for Syrian refugees or to ramp up military assistance to the Kurds further undermines American credibility.

Obama is said to prefer giving his speeches outside the Oval Office; indeed, this was only the third in his seven years in office. If the setting was meant to convey the seriousness of the issues at hand—terrorism at home, threats abroad—is was perfectly appropriate. If, however, it was also meant to advise Americans of new steps that were to be taken to address those issues, it was a major disappointment. It is not enough to opine that America needs to wait until there is a new resident in the White House in order to deal properly with the threats it faces at home and abroad. Many bad things can happen in a year, just as they have in this past year. It is a sad story indeed.