Terror Town: Why Washington's Politicians Want You to be Afraid 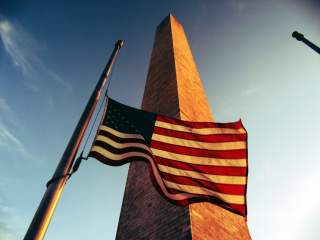 Congressman Michael McCaul, chairman of the House Homeland Security Committee, recently wrote about the national-security impetus to pass his new legislation to authorize the Trans-Sahara Counterterrorism Partnership (TSCTP), with the subtitle “Terrorism anywhere is a threat to civilization everywhere.”

Chairman McCaul is a seasoned legislator with significant foreign-policy and national-security experience as a member of the Homeland Security and the Foreign Affairs Committee. His bill puts parameters and reporting requirements around an existing counterterrorism program that has been led by the State Department since 2005, an oversight maneuver that is not uncommon to enact upon the executive branch. McCaul and his staff likely worked closely with State and the administration to ensure that the bill provides appropriate resourcing and authorities to ensure quick passage into law.

Unfortunately, the argument that McCaul uses to support his legislation suffers from the same erroneous understanding of terrorism and the impact of U.S. foreign policy that many leaders from both sides of the aisle have been misguided by since 9/11. He makes a reference to 9/11 and argues that the nebulous threat of future civilization-destroying attacks justifies the establishment or continuation of a security program.

“Terrorism” is an asymmetric form of warfare that has existed as long as warfare itself, where a typically (but not always) weaker combatant strikes at sensitive, high-value targets in an attempt to influence the military strategy or political aims of an opponent. Since the beginning of our war on terrorism, references and studies have been made of numerous instances of terrorism from the Roman Empire to the Vietnam War.

The historical evidence is clear that civilization has overwhelmingly triumphed and terrorism is not an existential threat to it. Terrorism did not destroy any of the great civilizations of history—that was done through conventional warfare or domestic problems—and humankind has progressed through the years (although with some missteps) towards a more “civilized” existence.

Yes, terrorism making use of modern technologies can cause harm to a number of people, but claiming that any instances of terrorism in the world are a threat to our civilization is a historically inaccurate exaggeration. This type of rhetoric gives practitioners of terrorism precisely what they want—an image and influence that outsizes their actual size and capability.

We must be sober and objective when examining where these assumptions have led us over the past two decades.

McCaul states that there are ten thousand Al Qaeda and ISIS jihadists operating in Africa “in addition to Boko Haram, Al-Shabab, and other extremist groups.” That these significant numbers exist after two large-scale conflicts were launched—along with dozens of smaller actions as part of the war on terrorism—is alarming. His estimations do not even extend to the Middle East, where groups like Al Qaeda and ISIS call home.

In fact, before 2001 Al Qaeda existed primarily in rural Afghanistan and parts of war-torn Somalia, and there was no ISIS or large extremist insurgencies in any significant country. Twenty years ago, countries like Iraq, Syria and Libya did not have large sections of ungoverned territories that were hotspots for stateless terrorists to thrive. And while Africa certainly had its share of problems at the time, the organization and financing of terrorist groups there has significantly improved over the last two decades.

On top of spending hundreds of billions for our military to conduct these wars, the United States spends billions trying to build the military and police of other countries into effective counterterrorism forces. The two largest benefactors of this are Afghanistan and Iraq. The Iraqi military forces that we spent years training and equipping dropped their U.S.-provided equipment and fled before smaller and less-resourced ISIS factions in 2014. We are still trying to rebuild that force today. Poor discipline, corruption and desertion continues to plague the Afghan forces we have been pouring money into for over fifteen years, with no end to our mission there in sight.

But in 2018, this continues to be the strategy that Washington leaders are double-downing down on. For instance, the Pentagon continues to seek funding for a Syria Train and Equip program after years of embarrassing failures. Authorizing funding for the Syrian T&E or programs like the TSCTP without serious reform to our overall strategy just enables the same flawed tactics in countries where terrorist activities have increased over their duration.

Congress has to take a serious, comprehensive review of the strategy that has driven the war on terror since 2001.

It would require the tall task of admitting failures and abandoning long-standing assumptions that don’t hold up to evidenced-based scrutiny. And it may be embarrassing to some individuals and groups who staked their careers to flawed thinking. But it is much better than leaders continuing to rehash the same policies and talking points while billions of dollars in taxpayer money are spent for uncertain security returns.

Robert Moore is a public policy advisor at Defense Priorities. Having spent nearly a decade working defense and foreign-policy issues on Capitol Hill, Robert has extensive knowledge of, and experience with, the policymaking process, including how Congress shapes U.S. national security. He most recently served as the lead staffer for Sen. Mike Lee on the Senate Armed Services Committee. He also advised Sen. Lee on matters of foreign relations, intelligence, homeland security, and veterans affairs. He previously worked as part of Sen. Jim DeMint’s national-security team.