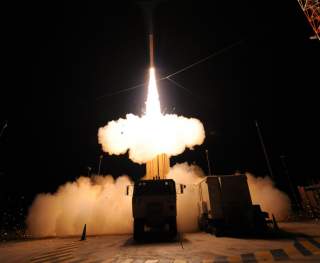 Editor’s Note: TNI’s Managing Editor, Harry J. Kazianis, spoke with Dan Sauter of the Business Development for Terminal High Altitude Area Defense at Lockheed Martin about the various advantages of the THAAD defense system and how it could help deal with emerging security threats in the Asia-Pacific.

Kazianis: For our readers who might not be familiar with THAAD or Terminal High Altitude Area Defense, could we begin by you giving TNI readers a basic description of the system and how it works? What makes it unique? Why is it in America's interest to have such a system?

Sauter: THAAD is a key element of the U.S. Ballistic Missile Defense System (BMDS) and is designed to defend U.S. troops, allied forces, population centers and critical infrastructure against short-thru-medium-range ballistic missiles. THAAD has a unique capability to destroy threats in both the endo- and exo-atmosphere using proven hit-to-kill (kinetic energy) lethality. THAAD is effective against all types of ballistic-missile warheads, especially including Weapons of Mass Destruction (chemical, nuclear or biological) payloads. THAAD was specifically designed to counter mass raids with its high firepower (up to 72 Interceptors per battery), capable organic radar and powerful battle manager/fire control capability. THAAD is interoperable with other BMDS elements, working in concert with Patriot/PAC-3, Aegis Ballistic Missile Defense, forward based sensors, and C2BMC (Command and Control, Battle Management, and Communications System) to maximize integrated air and missile defense capabilities. THAAD is mobile and rapidly deployable, which provides warfighters with greater flexibility to adapt to changing threat situations around the globe.

(You May Also Like: The 5 Most Powerful Navies on the Planet)

Kazianis: How is the system different than say PAC-3 or AEGIS systems? How is it different than other defensive systems, such as the S-300/S-400 or the Israeli Arrow?

Sauter: THAAD is the right solution today for improving ballistic-missile defense capabilities and architectures around the globe. THAAD’s unique endo & exo capability adds an essential layer of defense against current and emerging missile threats. THAAD complements existing ballistic-missile defenses by closing the battlespace gap between endo-only PAC-3 and exo-only Aegis BMD. THAAD is interoperable with all BMDS systems. As potential adversaries have continued to increase ballistic-missile inventories, THAAD provides an exceptional capability to defend against mass raids, a challenge for many ballistic-missile defense systems. THAAD is mobile and tactically transportable, providing for rapid repositioning, ensuring sustained protection against new threats while offering additional operational flexibility for high demand Aegis BMD and Patriot/PAC3 systems. THAAD has a 100 percent mission success rate in the last thirteen rigorous developmental and operational tests, including eleven for eleven successful intercepts. The most recent of these tests demonstrated the operational integration of THAAD Aegis and PAC-3 in simultaneous endo and exo atmospheric engagements of threat representative targets in an awesome display of the BMDS in action. While it is not appropriate for us to comment on other non-U.S. and non-Lockheed Martin systems, we believe that there is no other system in the world that can compare to THAAD’s unique capabilities (Endo-Exo capability against current and emerging advanced threats, hit-to-kill technology to destroy an array of missiles and payloads, extraordinary Mass-Raid capability, deployability and tactical mobility, interoperabiltiy with other BMDS elements, etc) and proven record (100 percent mission success record in nine years of rigorous developmental and complex operational BMDS testing—including 100 percent mission success and eleven for eleven intercepts, successful first operational deployment support strategic stability, delivering first <of many upcoming> THAAD foreign military sales ahead of schedule, operational readiness rate that far exceeds U.S. government standards, growing U.S. and international demand for THAAD, etc).

Kazianis: As I am sure you are quite aware, there is tremendous concern over Chinese ballistic-missile systems. How does THAAD stack up against such potential systems?

(You May Also Like: The 5 Deadliest Terrorist Groups on the Planet)

Sauter: The global proliferation of threat ballistic-missile systems, coupled with significant advances in precision, lethality and an exploitation of unprotected battlespace, requires a multitier, layered defense. To effectively defend troops, citizens, infrastructure and critical assets from these growing threats, THAAD’s unique endo & exo capability adds essential layers of defense, because it can operate in both regimes. THAAD complements existing ballistic-missile defenses by closing the battlespace gap between endo-only PAC-3 and exo-only Aegis BMD. THAAD is interoperable with all BMDS elements and provides an exceptional capability to defend against mass raids, a challenge for many ballistic-missile defense systems.

Kazianis: There does seem to be interest in foreign partners possibly purchasing the system. How would such a system benefit nations in the Asia-Pacific who face ballistic-missile challenges of their own, such as Japan, Taiwan and others?

Sauter: The U.S. government is currently executing the first THAAD foreign military sales to the United Arab Emirates, and the successful program remains ahead of schedule. There is significant international interest in THAAD, among U.S. partners around the globe, in order to better defend their people, infrastructure and critical assets against growing regional missile threats. In April 2013, the U.S. National Command Authority directed the first operational deployment of a THAAD unit in a strategic response to growing tensions in the Pacific Region. The THAAD unit remains deployed in the Pacific region today, providing a 24 x 7 defensive capability against a ballistic-missile threat that faces several U.S. international partners in the region.

Kazianis: In the last several days, there has been talk about North Korean nuclear-tipped missiles; specifically that Pyongyang could have the capability at present to place a miniaturized nuclear weapon on a long-range missile. In your view, is THAAD well positioned in its present form to handle challenges like North Korean medium or possible ICBM-style missiles?

Sauter: As we discussed earlier, THAAD’s capability was designed around addressing up to medium-range ballistic missiles, and as a result, has capability against longer-range threats, so THAAD is well positioned to handle these challenges.