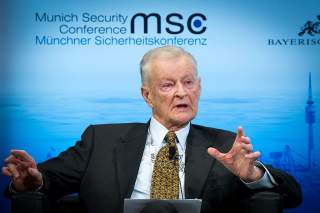 It is nearly a half century since I took a course called “Dynamics of Soviet Politics” by Professor Zbigniew Brzezinski. I knew a bit about him: he had taught at Harvard and moved to Columbia, where I was finishing my senior year, and had been a counselor to Lyndon Johnson. I also knew he was a Cold War hawk; like my own father, he hated the Communists, who drove his family out of their native country.

His classes were stunning. He lectured in rapid-fire fashion, his words hitting his student audience like so many machine-gun bullets. And he spoke in perfectly articulated, precise paragraphs: it was impossible to misunderstand what he said or why he said it.

His lectures were always full, but he seemed to have time for anyone who needed to see him. He was exceedingly generous to me (full disclosure: he gave me an excellent grade), and personified to a young graduating student what service to country was all about. That it was his adopted country simply elevated his stature in my eyes.

I remained in touch with Zbig after he left the Carter administration, where his hawkish views certainly must have rubbed his boss, the president, the wrong way on more than one occasion. I would often see him at CSIS, and eventually had an office three doors down from his. When I wrote my book on the American dispute with Israel over the funding of the Lavi fighter, I noted that Zbig had more than once been labeled an anti-Semite because he did not support everything Israel did. And I pointed out that the accusation was nothing more than a nasty slur; being a critic of Israeli policies was just that and nothing more. Zbig was deeply hurt by the unfair, false accusation; some years later this very decent man was shown what I had written about him and was quite moved.

Zbig argued against America going into Iraq. He could have remained silent, but that was not his way. I was serving in the George W. Bush administration, and believed at the time that the evidence of Saddam’s intention to develop a nuclear weapon was overwhelming. I was wrong—there was no evidence. For that reason, and perhaps others, history will probably prove Brzezinski to have been correct. But even if it does not, his courage and integrity in the face of overwhelming initial public and political support for the operation can only be admired.

Zbig’s best-known offspring is his daughter Mika, the television star. But his son Ian, who worked with me and for me, was a major player in the Pentagon and may once again be so in the future. His son Mark was one of the most capable American ambassadors ever to serve in Sweden. Ian is a Republican, Mark a Democrat. What they have in common is devotion to their country, which they inherited from both their parents.

There is a time when all of us must pass from this world, and not everyone leaves a mark behind. That is not the case with Zbig. His legacy of intellectual honesty, fierce patriotism and common decency will endure for many years to come. Those of us who knew him will miss him terribly and never forget him.