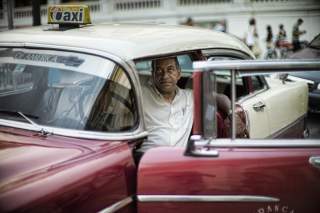 Cuba has an allure for the farther reaches of the American left. Sicko, Michael Moore’s 2007 critique of the American healthcare system, suggested that Cuba’s hospitals were better than ours. New York City mayor Bill De Blasio honeymooned there in 1991 and worked with a Cuba-positive activist group around the same time. The far left is often full of praise for Cuba’s race relations, its economic system, and its foreign policy; securing the release from American prison of the “Cuban Five” spy network was a minor cause célèbre for years. (“Solidarity” events for the spies—whose leader was convicted in connection with the death of three Americans and a Cuban—were graciously hosted by the Service Employees International Union and the Venezuelan Embassy.) You can even take a trip to Cuba with lefty mag The Nation, an old hand in the world of totalitarian tourism. (The satirist P.J. O’Rourke took its 1982 “Peace Cruise” up the Volga River, describing his fellow travelers as “people who believed everything about the Soviet Union was perfect, but they were bringing their own toilet paper.”)

But the Cuban mystique extends into the mainstream. With its vintage cars and “crumbling beauty,” some see Havana as an escape from the modern world. With sanctions being softened, the American travel set is eagerly anticipating the chance to puff a Cohiba on the Plaza Vieja as rocket-finned cars roll by. But will a wave of American tourists—and American money—change the place? MSNBC host Melissa Harris-Perry worried that there may be “a downside” to deeper economic ties. CNN International was more blunt, tweeting, “See Cuba before American investors ruin it.” Both took fire for their soft line on the island autocracy. One of Harris-Perry’s own panelists said that “we have to stop fetishizing” the situation in Cuba, and that “Cubans are entitled to a good standard of living.” Libertarian intellectual Adam Gurri was sharper, charging that CNN might as well have bid travelers to “go exploit the people imprisoned in their horrible dictatorship before they taste terrible, terrible freedom...Go see Cuba before it's ruined by Cubans' freedom to worship [at] whatever church they want to, and patronize or open any business they want to.”

Gurri and others are quite right to mock those who overlook the high price Cubans pay to be “quaint.” Cuba is full of ruins and old cars because its dictatorial leaders have grossly mismanaged its economy, stifling innovation and creativity while failing to achieve the equality that the regime’s apologists claim in defense of its brutality. The Cuban people deserve a better government and a prosperous economy that gives them the ultimate freedom: the right to shape their own destinies through ingenuity and self-discipline.

The charms of Cuba, then, are in our own minds, not those of Cubans. Something must have been perverted in us to make us see beauty in Cuba’s wreckage. That maligned CNN article offers a hint at what that is: “Cuba is not like other places, or rather, not like anywhere that exists today. To some outsiders, it looks firmly stuck in the 1950s. Vintage cars roam the streets, the landscape is absent of strip malls and global chains, and the buildings—though crumbling—hark back to a grander time.” The article’s headline: “Why you should travel to Cuba before it looks like everywhere else.”

That’s what draws us to Cuba—a queasiness with our own style of development, a style of development that’s been followed in many places around the world. Local, independent businesses have been replaced by massive chains. Efficiency and economies of scale are devouring variety. You can get the same mediocre sandwich for the same price in the same atmosphere in a Subway anywhere in America. It’s convenient, and it’s nice to go into a shop in a new town and know exactly what you’re going to get, but it creates a sameness, a blandness. A franchise is an alien, inorganic injection into a community: it has no history, no roots, no tradition; it is only “present” in the most physical, atomistic interpretation of the word. You walk through the door and you are In Subway, no matter whether you’re in Peoria or Petersburg or Peking. The same place is now everywhere; the old debates about individuation that roiled the medievals and the early moderns come to mind, with a twist: if two identical places exist, why travel?

Cuba’s appeal, then, isn’t what its defenders would have us believe, that its model of development is better. Cuba simply did not develop—it’s been spared the creeping global sameness because it languishes in doldrums of Marxist tommyrot. That this mess of a country offers a pleasant contrast to our own is evidence of the hidden price we’ve paid for the cheap and the convenient. A better world may be possible—but Cuba isn’t it.