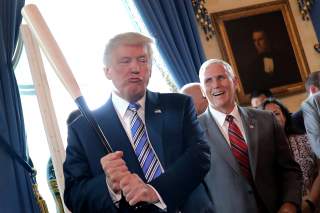 Donald Trump’s decision to “decertify” Iran—which really means that the administration no longer is prepared to certify that Tehran is complying with the terms of the 2015 Joint Comprehensive Plan of Action (JCPOA), colloquially known as the Iran nuclear agreement—actually would do nothing to the deal itself. All decertification means is that the Congress can choose to re-impose prior sanctions on Iran or impose new ones. In other words, the president is merely creating the perception that he is acting decisively; he is not, as he promised, actually taking the United States out of the agreement. Indeed, had he chosen to do so, Trump simply could have refused to issue the waivers that kept the pre-agreement sanctions from being imposed. Instead, when faced with a tough decision, the president blinked.

There is a general consensus that the JCPOA is a flawed agreement. It has not prevented Iran from continuing its missile development program. It has not forced Iran to open its military facilities to inspection. Its duration is far too short: even its lengthiest provision, which calls for IAEA monitoring of uranium ore concentrate produced by Iran from all uranium ore concentrate plants for twenty-five years, is really nothing more than a blink of an eye to a nation with a history spanning several millennia. At issue, however, is whether it is possible to renegotiate the JCPOA’s provisions, and, if not, what might be the implications of a new round of Congressionally imposed sanctions on Iran.

The JCPOA did not provide for the United States to lift those sanctions that were directed at Iran’s support for terrorism or its human rights records, nor did it completely prevent the maintenance of sanctions against American firms doing business with Iran. In particular, it permitted the sale of commercial aircraft to Iran, a provision that Boeing quickly seized upon when it signed a $20 billion agreement with Tehran. The agreement also provided for the end of sanctions against Iran’s oil and banking sectors, enabling it to re-enter the international financial system and to capitalize upon its largest source of export income.

The Congress could choose merely to restore those sanctions that affect American firms doing business, or hoping to, with Iran. Such a decision would have little impact on the Iranian economy, which has primarily benefitted from its trade with Europe. Indeed, Congressional action preventing American business with Tehran would bolster Europe’s exports to Iran since Airbus would likely win the commercial aircraft contract that Boeing would have forfeited. For American sanctions to have a true impact on the Iranian economy, Congress would have to re-impose secondary sanctions, that is, sanctions against states trading with Iran. European states would then have to determine whether they are prepared to accept the loss of business in the United States in order to continue to export their products to Iran.

It is clear that should the Congress impose secondary sanctions, the European reaction would be fierce, particularly from those states that co-signed the agreement with the United States. Mr. Trump is likely to find that he has a trade war on his hands, one that could dwarf any deficiencies that he claims to have found in NAFTA, which he seeks to re-negotiate, or, for that matter, in the Trans-Pacific Partnership, from which he has withdrawn.

Moreover, it is not at all clear that the Congress will institute new sanctions. Many legislators on both sides of the aisle fear the economic consequences of withdrawal, even if they have serious concerns about the nuclear agreement. Ed Royce, the Republican chairman of the House Foreign Affairs Committee has publicly voiced his reservations about withdrawing from the deal. Bob Corker, his counterpart in the Senate, whom Trump falsely blamed for supporting the deal, may not go out of his way to help the president’s credibility by pushing for sanctions that the president did not have the gumption to act on himself.

The JCPOA was a bad deal, badly negotiated. Perhaps its terms can be strengthened, but with a secretary of state whose relationship with the White House is deteriorating daily, with a dearth of senior officials at the State Department, and with a president who seems incapable of mastering details of any sort, now is not the time to contemplate a new negotiation, even if Iran were willing to engage in one. In light of these sorry circumstances, Congress would do best by leaving well enough alone.