The Iraq War Debate the GOP Won't Have 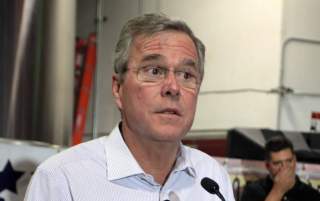 In polemical writing, what is left unwritten often says as much as the writing itself. Creating a clear and widely persuasive argument requires glossing over complexities and doubts. The writer’s anxieties hide in these gaps. Today’s political conversation about the Iraq war offers many examples of this, because it is an anxious subject for much of the political class. After all, support for launching the war was broad and bipartisan, but the war would become very unpopular. The war’s original backers find themselves in an ugly spot. If they reverse course and oppose the war, their opponents might accuse them of having made a major error of judgment. If they persist in supporting it, the opponent’s task is even simpler. There’s a mirror image of this problem for those who backed withdrawal from Iraq, given the rapid deterioration of the situation in the country. Almost everyone in politics thus avoids the most pressing questions about the war—and answers them incompletely when they arise.

An essay at National Review Online by David French is instructive. French cuts to the core of Democratic anxieties: by focusing their fire on the initial decision to go to war, they’re avoiding the harder questions that came later. Iraq is broken—can we fix it? How? Is it worth the cost? Can we abide growing Iranian and sectarian influence on Iraq’s politics? How should the Obama administration’s decision to withdraw—and the execution of that decision—be viewed in light of what followed: “a growing jihadist menace, genocide against Christians and other religious minorities, and increased instability in a geopolitically vital region”? The president’s promises of “no boots on the ground” have come to look both dogmatic and misleading—dogmatic because we are still participating in the war at great scale and expense, misleading because of the growing number of soldiers’ and contractors’ boots actually on the ground. The heiress apparent, meanwhile, has allegedly admitted that her opposition to the 2007 troop surge was motivated by political concerns, as opposed to strategic calculations. There are clearly questions that the Democrats would prefer not to address—questions about what French slyly calls “hard choices.”

The Iraq debate on the left, however, has been static for years, while the past two weeks have seen a dramatic shift on the right. Major 2016 candidates diving over one another to pounce on Jeb Bush’s prowar fumbles. One could be forgiven for thinking that the GOP is taking crucial steps towards restoring itself as the trusted party on foreign policy. Yet French’s diagnosis is more accurate: “It’s hard to escape the feeling that the unanimity in post-hoc opposition to the Iraq War among the GOP presidential contenders is born less from considered conviction than from an ability to read polls showing that the war is overwhelmingly unpopular.” Indeed, there is little evidence, aside from the singular figure (in the best and worst senses of the phrase) of Rand Paul, that the considered convictions animating the Republican foreign-policy discussion have changed. The lacunae in French’s essay show that the Republican return to foreign-policy dominance faces a long road.

French minimizes the significance of the GOP change, suggesting that the focus on the 2003 decision to invade “limit[s] our hindsight to the lessons we’d learned by 2005—when we were fighting a losing war in a deteriorating nation perceived to be devoid of WMDs.” He then raises the pragmatic concerns—what to do with the remnants of Iraq—that so vex the Democrats, and suggests that the GOP’s “staying power” strategy could have produced a better outcome. Fair enough—lesser empires have managed greater tasks. And the worries he raises about a post-American Iraq—jihadis, genocide, de-Christianization—are certainly valid. But he roars on to a thundering conclusion:

When Republicans say that they would not have toppled Saddam, here—in reality—is their message: “No, I would not topple a vulnerable regime that attempts to kill an American president, fires on American pilots, harbors terrorists, sponsors terror campaigns against American allies, violates cease-fire agreements with the American military, maintains stocks of chemical weapons, has launched multiple aggressive wars, and violates binding U.N. resolutions governing its weapons programs.” That’s not the message the next American president should send to an increasingly hostile and unstable world.

Moreover, he says, by attacking Obama’s handling of the Iraq war (“throwing away victory”) while questioning the original decision to invade, the Republicans forget that “there would have been no victory to throw away absent the invasion.” Worse, had we not overthrown Saddam, “the example of Syria shows that the alternative...wasn’t necessarily greater stability but potentially even worse genocidal chaos.”

In other words, the decision to change Iraq’s regime was correct, and set the region on a path to greater stability while exemplifying the leadership that the American people and the world expect.

The tension between this and the earlier bid to minimize the significance of the decision is glaring, as are some of the questions sidestepped. The genocide and de-Christianization he warns of, for example, seem to have been well underway before the withdrawal, with a vast sectarian sorting in Baghdad and two out of three Iraqi Christians fleeing between 2003 and 2010. And how confident can we be that the initial unrest of the Arab Spring would have led to the same ugly scenario in Iraq that it led to in Syria? French suggests that had the regime survived, only to face chaos, “we would potentially be in an even less favorable position than we are now to oppose ISIS (or similar jihadists), with all of Iraq imploding, including Baghdad.” There can be little doubt that Saddam would have cracked down viciously, but couldn’t this have led to a secular-Baathist Sunni regime facing an Iranian-backed Shia insurgency, with Sunni jihadi groups a sideshow? Such a conflict would be ugly, but a less urgent threat to American interests than the present situation in Iraq and Syria.

Yet French’s greatest gap is on the possibility that there were options for addressing the threat from Saddam’s Iraq other than the one we chose: invasion, overthrow and occupation. The United States had, after all, spent the twelve years prior to 2003 managing the Saddam problem in other ways. Not all of them worked (witness the sanctions regime), some were expensive (like the no-fly zones), and we did not change Saddam’s mind about the utility of weapons of mass destruction for his nation’s security. But there were successes, too—for example, 1998’s Operation Desert Fox. And the prospect that Saddam would someday reconstitute his WMD program and then become an undeterrable menace or supplier of doomsday devices to terrorists was, as John J. Mearsheimer and Stephen M. Walt exhaustively demonstrated in 2003, at odds with both the logic of deterrence and the record of Saddam’s conduct.

The Republican converts to the antiwar crowd have, characteristically, joined French in leaving the non-regime-change option undiscussed. Indeed, the war decision is generally framed as an intelligence failure—i.e., we were told Saddam had WMD, when he did not—which is both unfair (given the Bush administration’s intelligence malpractice) and misguided (since a war decision hinges on questions of strategy, not questions of fact). That other options are left off the table is a convenient frame for those candidates who are tied to the Iraq War decision, but most of them were in state-level politics in 2003. They don’t have to take the stance they’ve taken. This shows that the problem is deeper: the persistence within the GOP of a view in which bold action, guided by abstract reason more than history or humility, can predictably reshape the international environment for the better. A more philosophically grounded conservative movement would recognize the radical taint in this notion. Instead, we leave this fundamental problem undiscussed.