The Philippines Stood Up to China—and Won 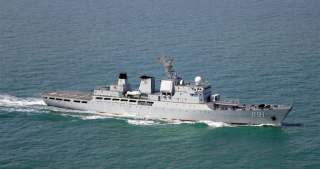 A new era has begun in the South China Sea. Things will never remain the same, even if facts on the ground will take some time to reflect new realities. China’s expansive maritime claims across the South China Sea have been nullified in unequivocal terms. Yes, China will surely go on to dismiss the verdict of an Arbitral Tribunal, constituted under the aegis of the United Nations Convention on the Law of the Sea (UNCLOS), as “null and void,” “a piece of scrap paper” and a conspiracy of the West.

But no one—except China’s ruling party (the Communist Party of China), and millions of its citizens who have been influenced by the Patriotic Education Program—can deny that Beijing’s doctrine of “historic rights” and its expansive nine-dash line claims are a crude, baseless expression of protoimperial chutzpah without an inch of alignment with prevailing international law. Previously, despite opposing third party arbitration in some of their disputes with neighboring countries, both India and Russia eventually relented and complied with arbitration. America, which behaved like China during the Cold War, has signed the UNCLOS, but hasn’t ratified it. Yet, it observes its relevant positions as a matter of customary international law.

If China fails to comply with the verdict of an international legal body, it might as well as bid farewell to its claim to being a responsible, law-abiding power that aspires to be leader of Asia. Yes, China can go on and bribe landlocked African and South Asian countries that desperately rely on Chinese largesse. But much of the world will view China as a glorified, overbearing “outlaw” or, at the very least, just another imperial power in Eastern clothing.

What is at stake is not only the future of the Asian security architecture, but also China’s trajectory as the emerging global hyperpower. Just a decade ago, many welcomed the rise of China as a healthy dose of balance against Western hubris, particularly during the Bush administration. Today, a growing number of countries, from Eastern Europe to Southeast Asia, are beginning to reembrace America as an indispensable hedge against revisionist ambitions of Eastern powers. The ball is now in China’s court. It should prove that it is a protector of the global order, not a usurper of smaller nations’ rights in accordance to modern international law.

Without a question, China has been an indispensable source of development assistance, infrastructure investments and cultural enrichment for many of its neighbors and developing countries around the world. China is by no means a monolithic power. But it can’t claim authority and invite respect if it doesn’t recalibrate its aggressive maritime posturing in its near abroad. The Philippines, under President Rodrigo Duterte, is anxious to rebuild frayed ties with Beijing, but it is incumbent upon China to prove its good intentions in this regard.

Paradoxically, the simmering crisis in the South China Sea can serve as a strategic catharsis for a renaissance in China’s relations with aggrieved neighboring states, especially the Philippines. Mao Zedong pithily realized this dialectic when he exclaimed: “Everything under heaven is in utter chaos; the situation is excellent.”

Trial of the Century

After three years of nerve-wracking anticipation, the Philippines concluded its high-profile lawfare (legal warfare) strategy against China in a dramatic fashion. It was a clean sweep. The Philippines won almost on every single one of its arguments against its giant neighbor, which coercively wrested control of the Philippine-claimed Mischief reef and Scarborough Shoal in 1994 and 2012.

To put things into perspective: the Scarborough Shoal is located slightly above one hundred nautical miles from Philippine shores, but six hundred nautical miles away from nearest Chinese coastline. China has no overlapping Exclusive Economic Zone (EEZ) with the Philippines. Yet it is China that has been preventing Filipino fishermen from exercising the Philippines’ sovereign rights, per UNCLOS, to exploit natural resources within its EEZ. This has been a key stumbling block in bilateral relations in recent years. A majority of Filipinos have an extremely negative view of China, which is seen as a nothing but a new, yet familiar imperial power on the horizon.

Bereft of the sufficient American military support, and lacking any significant deterrence capabilities on its own, the Philippines made the unprecedented decision to take China to international court over the South China Sea disputes. No other Southeast Asian country dared to do so, even if Vietnam, Indonesia and Malaysia have been lamenting China’s growing encroachment into their EEZs and traditional fishing grounds. When the Philippines initiated its lawsuit, many neighbors and Western scholars, who failed to appreciate the Southeast Asian country’s mixture of sheer desperation and legal savvy, ridiculed it.

Some leading scholars even doubted the arbitration body would dare to rule against a powerful China, which hasn’t shied away from all forms of intimidation tactics. Earlier this year, China announced that it would soon set up its own international arbitration bodies as an alternative to supposedly Western-dominated international courts. China waged a vicious, systematic effort to denigrate, delegitimize and distort the nature of the Philippine-initiated arbitration proceedings, while threatening to withdraw from the UNCLOS altogether.

China even went so far as aggressively lobbying members of the tribunal to drop the case. And who knows what kind of tactics it was willing to employ to nix the whole proceedings. In fairness, China also raised a series of sophisticated arguments to procedurally undermine the Philippines’ case, invoking jurisdictional and admissibility concerns. In its position papers, Beijing maintained that the UNCLOS and arbitration bodies under its aegis have no jurisdiction to arbitrate the essentially sovereignty-related disputes in the South China Sea disputes. China also cited exemption clauses under the UNCLOS (Art. 298, Section 2, Part XV) to absolve itself of any compliance with any unfavorable verdict.

Curiously, China accused the Philippines of abusing prior bilateral and multilateral agreements as well as abusing international law against China. Strangely, China painted itself as the victim, when a cursory look at China’s paramilitary patrols, naval drills, fishing practices and massive reclamation activities— seventeen times larger than that of all other claimant countries combined—are in clear contravention of the 2002 Declaration on the Conduct of Parties in the South China Sea.

China also tried to leverage its largesse to rally the support of up to sixty countries to oppose the Philippines’ arbitration case. Independent research, however, confirms that only eight, mostly poor and landlocked countries, sided with China, while forty countries have supported the Philippine position.

The countries supporting China’s position rank among the most corrupt nations on earth, while much of the developed world has sided with the Philippines. The rest are just fence sitters, who are likely very sympathetic to the Philippines, but fear antagonizing China, which has obviously abandoned any semblance of no-strings-attached “Beijing Consensus” foreign policy. Yet, the Arbitral Tribunal at The Hague stood its ground. And firmly so.

Some Filipinos would go so far as to claim that July 12 is the country’s new independence day. At 5:00 pm, Manila time, tens of millions of Filipinos were driven into ecstatic joy, celebrating an unequivocal moral and legal victory. It was, for them, the victory of David against Asia’s Goliath.

The Tribunal ruled that China’s doctrine of “historic rights”, the basis of its nine-dash-line claims, as “incompatible” with modern international law, since “there was no evidence that China had historically exercised exclusive control over the waters or their resources.”

The court also ruled that China “violated the Philippines’ sovereign rights” by preventing its neighbor from exercising its sovereign rights to exploit fisheries stock and hydrocarbon resources within its EEZ. The Tribunal ruled against China’s massive reclamation activities in the Spratly chain of islands, since they are “incompatible with the obligations” of member states—China is a signatory to UNCLOS—and “inflicted irreparable harm to the maritime environment” and “destroyed evidence of natural condition of features” in the area.

The Tribunal also decided that there are no naturally-formed “islands” (per Article 121 of UNCLOS) in the Spratly chain of islands, which is home to mostly low-tide-elevations, which can neither generate any sovereignty claim nor maritime entitlements. At most, few—such as the Scarborough Shoal—are rocks, which can only generate twelve nautical miles in the territorial sea. The court also decided that the Philippines and China have no overlapping EEZs.

Contrary to Chinese propaganda, the verdict, per Article 296 as well as Article 11 of Annex VII of the Convention, is final and binding. In accordance to Article 9, Annex VII of UNCLOS, China’s non-participation in the formal proceedings didn’t bar the arbitration case from moving forward. China repeatedly turned down the opportunity to present its case through formal channels.

But enforcement is the big concern, though this doesn’t mean that China is off the hook. First of all, the Philippines’ sweeping victory has set an extremely encouraging precedent for other likeminded countries like Vietnam, Japan and even Indonesia to file similar cases against China. This is what I have called a “legal multiplier.” In short, China is now susceptible to a de facto class suit in its adjacent waters.