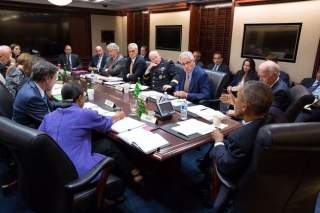 This was scarcely the speech that President Obama wanted to deliver. But it was a speech that he had next to no choice about delivering. Faced with the surging ISIL forces in Iraq and Syria who not only have no compunction about beheading Americans but revel in it, Obama risked the collapse of his presidency if he remained as indolent about American security as he has been in recent years. He issued what amounted to a sober declaration of war that must have left the heads of his former anti-war supporters spinning, though perhaps they have become accustomed to his gyrations.

Obama made it plain: no boots on the ground. No grand declarations about bringing democracy to the Middle East. Instead, Obama called for a coalition to defeat ISIS and is apparently going to team up with Saudi Arabia to train the much-ballyhooed moderate Syrian fighters (though moderation doesn’t seem like something that is in great supply in the Middle East these days). The greatest threat that Obama invoked was the possibility of the return of ISIS-trained fighters back to their home countries, including America. As he put it, “Our intelligence community believes that thousands of foreigners, including Europeans and some Americans, have joined them in Syria and Iraq. Trained and battle-hardened, these fighters could try to return to their home countries and carry out deadly attacks.” For “could” read “will.”

None of Obama’s measures will be enough to satisfy his most perfervid neocon critics. It was déjà vu all over again as Dick Cheney resurfaced at the American Enterprise Institute today, where he has repeatedly offered his judgments about the necessity for permanent warfare in the Middle East. Obama, he said, has “failed utterly,” an utterance that is itself open to dispute. After all, if failure has been the leitmotif of Obama, it also has to be said that his lapses derived from a war he was saddled with that he argued should never have been fought in the first place. What George W. Bush and Cheney unleashed was a maelstrom that, far from subsiding, appears to be taking on ever-more sinister dimensions.

How confident should we be about Obama’s sanguine assessment that “with a new Iraqi government in place, and following consultations with allies abroad and Congress at home, I can announce that America will lead a broad coalition to roll back this terrorist threat. Our objective is clear: We will degrade and ultimately destroy ISIL through a comprehensive and sustained counterterrorism strategy"?

It would be hard to think of a more unfortunate term for Obama to have employed than “roll back.” This was the bogus doctrine championed by John Foster Dulles during the 1950s but it went nowhere. Similarly, it is questionable whether ISIL can be destroyed in a region where it seems to enjoy growing popularity, not to mention in the United Kingdom and elsewhere. Whether a coherent and effective Iraqi government has truly been established is also open to question. If anything, the entire Middle East appears to be succumbing to its fissiparous tendencies. Even Iran, the chief fomenter until recently of terrorism in the region, is apparently quaking before the Frankenstein that has grown up before its eyes.

What is taking place in the Middle East is a classic assessment of national interest, not a crusade to extirpate tyranny. Obama, however, felt obliged to resort to moral uplift in his peroration, stating “our own security depends upon our willingness to do what it takes to defend this nation and uphold the values that we stand for -- timeless ideals that will endure long after those who offer only hate and destruction have been vanquished from the Earth.”

But this was no more than a perfunctory statement. All along Obama has been loath to engage in humanitarian intervention. Now he is back in Iraq minus the torture policies Cheney espouses. But the permanent war that Cheney and his neocon chums dreamed of is fast becoming a reality. As his presidency heads towards its terminus, Obama is back in Iraq pursuing a strategy of Cheney-lite. Obama only has to hope that in returning to a region he attempted to escape that he isn't donning the shirt of Nessus.