The Steady but Unremarkable Clement Attlee 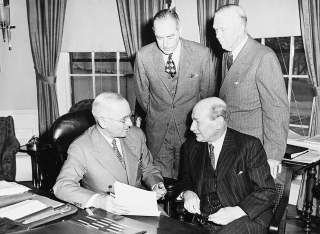 CLEMENT ATTLEE was blessed by good fortune. Wounded at Gallipoli, he survived the military disaster while many of his comrades never left the battlefield. When an ailing George Lansbury relinquished the leadership of the Labour Party in 1935, Attlee—virtually alone among Labour’s senior front-benchers to survive the electoral wipeout that the party had suffered four years earlier—was easily elected to replace him. When the British public, haunted by visions of the unemployment and homelessness that characterized the aftermath of the Great War, turned away from Winston Churchill and abandoned the Conservatives in the 1945 election, Attlee, still Labour’s leader despite numerous attempts to unseat him, assumed the prime ministership in the great man’s place. And as a prime minister surrounded by an exceedingly talented group of cabinet colleagues, ranging from the hardline Socialists Stafford Cripps and the rabble-rousing Nye Bevan to Herbert Morrison and Ernest Bevin on Labour’s right, he was able to overhaul Britain’s social system while replacing its empire with a loose collection of its former colonies and dominions, which was termed the British Commonwealth (now called simply “the Commonwealth”). In Citizen Clem: A Biography of Attlee, John Bew, an acclaimed historian and professor at King’s College London, has produced a biography that would have readers believe that Attlee’s career was more a product of his talent than of good luck. He argues that patriotism and pragmatism, rather than ideology, motivated Attlee throughout his professional life, and led to his success. Neither patriotism nor pragmatism necessarily mark one out for greatness, however, and they certainly did not in Attlee’s case.

Bew’s biography represents his attempt to demonstrate that Attlee was Britain’s “first-ranked citizen.” He does not go so far as to assert that Attlee outranks Churchill in the annals of Britain’s prime ministers. Indeed, Bew acknowledges that such a claim would have “caused Attlee himself to guffaw.” Roy Jenkins, a leading Labour politician and political historian of the first rank, who had previously written biographies of Gladstone and Baldwin, as well as of Attlee, whom he knew as a family friend (Jenkins’s father, Arthur, was Attlee’s wartime parliamentary private secretary) concluded his biography of Churchill with the observation:

When I started writing this book, I thought that Gladstone was, by a narrow margin, the greater man. . . . In the course of writing it, I have changed my mind. . . . I now put Churchill . . . as the greatest human being ever to occupy 10 Downing Street.

Bew wisely recognized that to compare Attlee to Churchill would have been nothing short of risible.

What Bew might actually mean by “first-ranked citizen” is not entirely clear, however. Perhaps he considers Attlee to have been a greater man than, say, his talented contemporary, David Lloyd George; or perhaps he is comparing Attlee to other residents of 10 Downing Street, such as Sir Robert Walpole, Pitt the Younger or Disraeli. Still, to rank Attlee in their company, much less Gladstone’s, would call for nothing less than a leap of faith.

Bew argues that Attlee has not so much been underestimated as “underappreciated.” To buttress his case, Bew focuses not only on Attlee’s public career, but also on his private intellectual interests, most notably the books he read and the poetry he wrote, though at times that poetry was little more than doggerel. In any event, Bew’s characterization of Attlee as underappreciated is close to the mark: few of his contemporaries lavished him with praise until late in life, most after he had relinquished his leadership of the Labour Party. All the same, like so many biographers who have fallen in love with those whose lives they chronicle, Bew appears to have overestimated the greatness of his subject. His characterization of Attlee ultimately falls short, because his subject was, at bottom, an unremarkable man, both by his own account and by most of those with whom he served or otherwise interacted.

ATTLEE WAS one of eight children, born to an upper-middle-class family that, according to family lore, traced its ancestry almost to the Norman conquest. He pursued an upper-middle-class education: first at Haileybury, an elite public school a notch or two below Eton and Harrow, and then at Oxford, which all three of his brothers had also attended. And like others of his social class, he received a “generous stipend” from his father. He “embraced the university lifestyle—rowing, reading and socialising.” Needless to say, he did not graduate with first-class honors. His passions were history and cricket; the latter tended to be a gentleman’s sport, as opposed to football (what Americans call soccer), both then and now the favored game of those on Britain’s lower economic rungs.

Attlee’s maternal family traditionally voted Conservative, as might have been expected given its social class, while his father was a Liberal who venerated Gladstone. Attlee never had a real taste for either party. After a brief stint as a barrister, his father’s profession, which he entered for lack of interest in very much of anything, he hit upon his lifelong calling: politics, particularly of the socialist variety. He became active in the Haileybury club, a noblesse-oblige institution that facilitated meetings among poor teenagers from the East End of London under the guidance of Old Haileyburians. Captivated by what he saw, Attlee became increasingly involved in the club’s activities and, among other things, acted as a kind of drill sergeant for the boys. He soon moved his lodgings to the club, though he always could return to the safety net of his family’s residence in the wealthier London suburb of Putney, and benefited from his father’s financial support to supplement his meager income as club manager.

Attlee’s socialism did not result from a particular epiphany, which is how his brother Tom described his own conversion. Instead, Clement almost fell into the movement in 1906 as a result of his activities in the East End. By 1907 Attlee had followed Tom into the International Labour Party (ILP), which the Scotsman Keir Hardie had founded some two decades earlier. Hardie, who was elected the first Labour member of Parliament, established Scotland as a Labour stronghold, which it remained for a century, until it was eclipsed by the Scottish Nationalists.

It is arguable, however, that Attlee, while sincere in his concern for the working class, was also motivated by that same sense of noblesse oblige that he never shed. Years later, as Attlee contemplated the production of a film that would make the case for an international coalition to stop Hitler, he described the effort as “valuable propaganda if done sufficiently crudely for the popular taste.” Neither the trade unionist Ernest Bevin nor the Welsh firebrand Nye Bevan would ever have uttered such words. It is noteworthy that Bew quotes Attlee without comment, because any comment would have diminished the man’s stature.

Just two years after joining the ILP, Attlee stood (the British do not run) for a place on the borough council of Stepney, in London’s East End. He garnered a grand total of sixty-nine votes. But he had launched his political career, and he flourished as a somewhat-radical stump speaker for the ILP.

Attlee was deeply affected by his experience in the Great War, having been wounded not only at Gallipoli but also in the ill-fated British attempt to relieve the besieged garrison at Kut (in today’s Iraq). He returned home both a war hero and a convinced patriot. As Bew rightly argues, patriotism was one of the primary forces that motivated Attlee throughout his career, and he never considered it to be in conflict with his socialist principles.

Attlee also returned home mildly disdainful of the Anglo-socialist intelligentsia, exemplified by Sidney and Beatrice Webb, both of whom issued panegyrics to Stalin’s Soviet Union. He later felt similarly about the likes of Harold Laski, a professor at the London School of Economics (among whose founders were the Webbs), a leading member of Labour’s National Executive Council and also someone who suffered from delusions about the Soviet experiment, as the Left referred to it during the 1930s. These were the type of people whom George Orwell had in mind when he sent up British socialism in his novel 1984.

More realist than purist, Atlee was not anti-intellectual or antireform. As Bew repeatedly demonstrates, that was far from the case. It was simply that he had little time for the intolerance that the intellectuals displayed for views other than their own, for the arrogance that permeated their arguments and for their conviction that the only perspective that mattered was theirs. Today their behavior would be styled as “political correctness.”

Attlee also could not ascribe to the views of the Leftist firebrand Aneurin Bevan, and those of his equally outspoken wife Jennie Lee, about whom Bew has little to say. The couple represented a strain in the Labour Party that has since been embodied by Michael Foot, a gifted historian who led Labour to a disastrous electoral defeat in 1983, and until recently by Jeremy Corbyn, who reversed that narrative in the June 2017 general election. Attlee’s socialism was simply too much of the moderate variety, though perhaps not as emollient as Tony Blair’s New Labour some seven decades later.