The Trouble with Confronting Rogue States 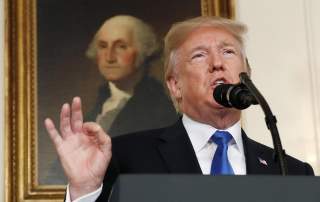 On October 15, President Donald Trump must once again decide whether to re-certify Iran as in compliance with the Joint Comprehensive Plan of Action (JCPOA), better known as the Iran nuclear deal. Recent statements from the White House suggest Trump will, in fact, de-certify Iran as following the agreement. While this move will not “tear up” the deal as Trump once promised, it will firmly establish the administration’s desire to seek a more confrontational approach towards Tehran, as opposed to rapprochement.

First, despite being currently locked in a showdown with North Korea over its nuclear achievements, the White House appears to believe it can tackle two rogue states with nuclear aspirations simultaneously. In the event a crisis develops in Iran as well as Korea, it remains to be seen how the Trump administration plans to devote the resources necessary to handle each situation. Even the Bush administration, with its “Freedom Agenda” in the early 2000s, found out the hard way it could only really handle one adversary at a time.

Second, given his troubles on the domestic political front, taking a confrontational stance towards Iran will ensure Trump stays on the right side of the Washington establishment, particularly Republicans and even some hawkish Democrats. For all the talk of ‘America First,’ even early indications revealed restraint and retrenchment were not going to be cornerstones of the Trump administration’s foreign policy. If anything was going to keep a great disruptor like Trump relevant, it was hawkishness on defense and foreign policy.

If any consistent objective has manifested in the first year of the Trump administration, it is to confront rogue states like Iran and North Korea. In fact, it appears to have taken precedence over many other matters, such as combating terrorism or curbing illegal immigration, owing perhaps to the more domestically divisive nature of these issues. The world’s “bad boys,” like Iran and North Korea, are enduring challenges that have spanned multiple administrations, but previous presidents have largely chosen to manage and mitigate, occasionally turning up the heat when the situation dictated. Trump, on the other hand, has called out the troublemakers from the very beginning and is charging head-first into the fray.

Intimidation is the appeal of confrontation. The logic goes that intimidating one’s opponents will encourage acquiescence, thereby defeating belligerents without physically resorting to armed conflict. To quote Sun Tzu, “The supreme art of war is to subdue the enemy without fighting.” For the incessant talk of “all options being on the table” and boasting of military might, influencing your adversary into “chickening out” is the ultimate display of strength. But intimidation is unlikely to convince anyone to get in line, to say nothing of North Korea.

First, rogue states pursue weapons of mass destruction programs due in part to their physical vulnerability. Being armed with the deadliest weapons known to man are the ultimate insurance policy against coercion or regime change; only the most desperate or irrational of actors would attack someone knowing the cost of doing so would be disproportionately high. In fact, it is precisely the fate of ex-rogue states like Iraq and Libya that have forever convinced North Korea and, perhaps Iran, of the importance of maintaining such terrifying arsenals.

Second, Iran and North Korea are united in their unbridled hatred and hostility towards the U.S. Anti-Americanism is a raison d’être and a basis of legitimacy for both the Ayatollah in Tehran and the Kim dynasty in Pyongyang. As long as this hatred and hostility rages in their hearts, Washington will always find it next to impossible to bring either regime to heel. Difficulties in achieving any sort of rapprochement with Iran and North Korea, or any rogue state, only exemplify the no-win nature of engagement with either.

Third, rogue states often align themselves with the great power rivals of the superpower and those aligned with it. Often, the U.S. and its allies find the worst obstructionism comes not from the “bad boys,” but those who offer tacit support or full-blown sponsorship of such countries. China and Russia play this role today and play it very well. As a result, any confrontation with Iran or North Korea runs the risk of triggering a broader, larger, confrontation with a bigger fish. The question being; is showing Pyongyang and Tehran who’s boss worth a potentially disastrous face-off with Beijing and Moscow?

Fourth, it is difficult to intimidate belligerents for whom intimidation is a way of life. It may take a bully to tackle a bully, but unless the U.S. honestly wants to adopt this persona, at the risk of damaging its credibility and prestige on the world stage, the cost of this strategy will outweigh the benefits in the long run. For all its faults, reneging on the Iran nuclear deal, for example, will all but guarantee Tehran will never come to the bargaining table, save for the most extraordinary of situations. This is compounded by the fact the nuclear deal was viewed unfavorably by Ayatollah Khamenei and other hard-liners in Tehran and could be even less popular now, given the deal has not resulted in the economic recovery Iranians were promised. The unwillingness to return to negotiations may not terribly concern Trump and Iran hawks, but it is the sort of thing that rears its ugly head during a major crisis such as an armed conflict or any other situation that could result in catastrophe.

It is unlikely the Trump administration seeks an armed confrontation with either Iran nor North Korea. Were such a confrontation to occur and end badly, the White House’s current occupants would pay a hefty political price, an outcome it can ill-afford given the administration’s notoriously low approval ratings. While the Trump administration has struck a more militaristic and nationalistic tone with regards to defense and foreign policy, the reality is that some of this may merely be cosmetic and such an administration may, in fact, be less-inclined to use force. Instead, Trump and his advisers seem to be hedging their bets that the appearance of strength and resolution will force America’s adversaries to acquiesce or, at minimum, stay out of Washington’s way.

This has not been the case. North Korea let the U.S. know just what it thought of Trump’s “fire, fury, and, frankly, power” ultimatum—by testing a thermonuclear warhead. Iran continues to do what it does, walking the tightrope in the Persian Gulf by engaging in provocative behavior that could easily result in a deadly clash, in addition to doubling down on its sponsorship of insurgencies and terrorists throughout the region and direct involvement in the Iraqi and Syrian civil wars. While sanctions have taken their toll on both countries, they have seldom forced any remarkable change in behavior to the world’s benefit.

The emerging lesson is that credibility and prestige are not just about appearing tough or not being afraid of a tussle. The Trump administration’s hard line appears to have, in turn, hardened the resolve of America’s adversaries to resist at all costs. This is not to suggest a more permissive attitude is advisable or that assertiveness backed with strength can never work against an enemy. In fact, the U.S. and its allies have a responsibility to decisively respond to provocation, by force, if necessary, and to not permit agitators and the purveyors of instability to run the world table.

But it is to say a strategy rooted exclusively in military power and unilateralism will encourage the same behavior in return. It will also serve to validate narratives serving as a basis of a hostile regime’s existence. Unlike the world that exists in Internet forums and Tom Clancy novels, the real world is full of bad guys with brains who use them; the belief the U.S. can abrogate the Iran deal and still expect Tehran to return to negotiate a “better” deal being a prime example of this mentality. Like any professional agitator, rogue states know how to exploit the very system they often decry, using international law and norms as weapons against more powerful states. If the U.S. does not moderate its own behavior, it will be drawn into a conflict where the strength of narratives, not militaries, is the deciding factor.

It was once said counter-insurgency constitutes the “graduate level” of war. It could easily be said dealing with rogue states constitutes the graduate level of foreign policy. How exactly does one deal with a belligerent that does not play by the rules, yet finds no problem benefiting from and exploiting them? How is it possible to achieve rapprochement with regimes believing themselves, rightly or wrongly, to be in an everlasting struggle against imperialism and oppression? Overreaction is certainly not the answer, but neither is ignorance.

If America’s experiences in dealing with Afghanistan, Iraq, Libya and others have proven anything, it is that rogue states can play their game all day long. As tough a pill as it may be to swallow, the aggressive and confrontational approach will yield only the same in return with regards to Iran and North Korea, forcing our decisionmakers to make the choices they professed could have ultimately been avoided if only they had been “tougher” earlier and often. Like any self-fulfilling prophecy, the peril of the hard line owes to the belief there is just no other way.