The Trouble in Turkey Is Far From Over 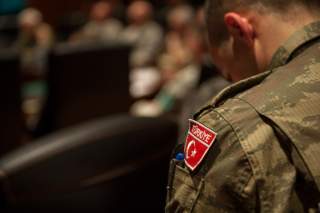 Turkey’s President Recep Tayyip Erdogan appears to have successfully stopped the military coup launched against him last night. It was a bloody affair—images circulated on social media of civilian protesters torn apart by heavy-weapons fire, of helicopters firing into or near crowds, and of pro-coup soldiers abused and even beheaded by Erdogan’s supporters. Yet it could have been far, far worse, and the international aftershocks of the event may still be severe.

While it remains unclear precisely who launched the coup or just how events transpired, Turkey was clearly faced with the prospect of major internal conflict, and at a time when it already has one internal war (against the Kurds in its southeast) and sits on the frontiers of the struggle in Syria and Iraq. With the police loyal to Erdogan, elements of the military attempting to overthrow him, other elements of the military neutral or coming to his defense, massive, restive crowds in the streets and Erdogan himself in an unknown location, Turkey suffered several hours of chaos which could have easily resulted in far uglier violence—urban combat, massacres (like those that followed the coup in Egypt), territorial division, and so forth. If this situation persisted, the impact could have been far worse than that of the conflict in Syria:

-Loss of control on the Syrian border could have enabled migration waves from there, and could have empowered ISIS to bring in fighters and supplies or send attackers into Turkey, Europe, and beyond.

-Loss of control in the Kurdish areas could have emboldened Turkey’s Kurds to seek greater independence, which would destabilize Syria, Iraq, and Iran and the political balances among the Kurdish factions in those countries.

-Any impact on the safe movement of shipping through the Bosphorus could have lead to great-power confrontation, as Russia uses the straits for commerce and to supply Syria, and has rights there guaranteed by a major international treaty; Turkey is, of course, a NATO member.

-American forces at Incirlik Air Base play a key role in the intervention against ISIS—oh, and they have nuclear weapons.

Thankfully, the coup was so poorly planned that it seems to have failed decisively, reducing the salience of these worries. In an incredible testament to how much Turkey has changed—and perhaps to the strength of democracy in Turkey in spite of Erdogan’s best efforts—all of the major political parties have come out against the coup attempt. Yet the real confrontation may only be beginning. Erdogan’s regime responded swiftly, removing thousands of judges; the military was already due for a reshuffle and now may face a full-scale purge. There may be an opportunity for political reconciliation here, given the broad opposition to the coup, but, as Paul Pillar observes:

Bearing in mind Erdogan's increasingly evident authoritarian streak...It is likely that this episode will incline Erdogan to make that streak even bolder. That seems more in line with his habits than for him to conclude—which would be a reasonable conclusion—that he had overplayed his political hand and that this overplaying helped to stimulate the coup attempt.

Erdogan will now enjoy something of a mandate to identify and punish enemies and to propose political reforms. Given his seemingly bottomless appetite for power and his personalistic rule, attempts to rein in the military may mean nothing more than the erosion of another semi-independent institution. And if his efforts make the military weaker, it will be less able to address the real security problems inside and around Turkey. (With ISIS looming next door, historians may look back on a purge now in the same light as Stalin’s campaign to rid the Red Army of some of its best officers prior to World War II.) The only plausible benefit here could be a renewed peace process with the Kurds, but that would only happen if Erdogan recognizes his vulnerability and decides not to fight on multiple fronts. Has he ever shown such inclinations?

Other Turkish foreign-policy trends may be impacted by the coup. Only days before, Turkish prime minister Binali Yildirim had signalled a possible normalization with Bashar al-Assad’s Syria, a move that could have left the Syrian rebels high and dry. Greece has also apparently said it will return pro-coup soldiers that fled there, which could signal better relations among the perennial rivals. (There has been talk in Washington for some time now that a resolution of the Cyprus issue is in the offing.) And there have been rumors of other developments that could have an international impact, rumors which we may learn more about in the coming days:

-Rumors that the pilot who shot down a Russian Su-24 last year was among the coup’s participants, which could grease the wheels for some rapprochement with Russia.

-Rumors that Erdogan may have taken refuge in Iran at some point in the coup.

-Rumors that Erdogan was denied refuge in Germany.

-Rumors that Qatar offered to help him, perhaps even with armed force.

There may be others. Obviously, any country that treated Erdogan poorly in his hour of crisis might be in for trouble with Turkey.

But there may also be serious problems ahead in U.S.-Turkish relations. Turkey has laid the blame for the coup at the feet of Fethullah Gulen, a religious figure and former ally of his government who resides in Pennsylvania. Prime Minister Yildirim has stated that those who “stand by” Gulen “won't be a friend of Turkey and will be considered at war with Turkey.” President Erdogan has publicly said that the United States would extradite Gulen if it is a true strategic ally. Secretary of State John Kerry has replied that Washington would consider an extradition request, but that Turkey would need to provide solid evidence. Given the damage Erdogan’s government has done to its own credibility in recent years and the serious punishment Gulen could face if he is returned to Turkish soil, the bar will likely be very high. With ties between Washington and Ankara already fraying and Erdogan’s history of major foreign-policy shifts, an earthquake may be coming.