The Ultimate Irony: Is China the 'America' of Asia? 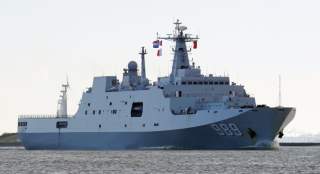 The rising nation was full of self-confidence and determined to expand. Its neighbor refused to negotiate in a bitter territorial dispute, convinced there was no legitimate issue to discuss. The new entrant to the international order also challenged the world’s greatest global power, which was forced to decide whether war could be justified against a country thousands of miles from home. The upstart’s territorial claims were excessive, but no one desired a rerun of past conflicts.

The year was 1845. The United States had absorbed Texas after the latter’s violent secession from Mexico; Washington demanded its neighbor’s acquiescence not only to the errant territory’s annexation but also to a new national boundary set well beyond Anglo settlements. The United States backed its position with provocative military maneuvers, occupying disputed territory. War soon resulted.

Around the same time Washington took an equally truculent position in dealing with Great Britain over the far western boundary between America and Canada. Where prior agreements had left ambiguity, the United States saw certainty. Some Americans proclaimed “54-40 or fight,” wanting to push the Oregon border up to the Russian territory (Alaska) later sold to the United States. The Polk administration took a less extreme position and London accommodated the arrogant juvenile nation, a necessary step in ultimately developing the “special relationship” between onetime enemies.

Today Beijing’s actions in the East Asian waters have a similar feel. The international and regional order is under strain as the People’s Republic of China (PRC) has become an economic colossus with growing military might and diplomatic influence. Control of islands offer resource ownership and maritime primacy, encouraging the PRC to assert territorial claims once considered impractical or worthless.

Although America’s military remains supreme, the U.S. presence no longer intimidates. Beijing has become increasingly assertive, even truculent. Analysts spin scenarios in which America and China end up at war over some “damn fool thing” in the western Pacific rather than the Balkans, as was the case in World War I.

The waters of East Asia are filled with islands, including the Diaoyu/Senkaku, Nansha/Spratly, and Xisha/Paracel Islands, as well as Huangyan Island/Scarborough Reef.  (For simplicity’s sake I will use the latter names, more familiar in the United States)  The PRC claims all (and Taiwan, many) of these isles. Asserting a variety of opposing claims are Brunei, Japan, Malaysia, the Philippines, and Vietnam.

Washington is not a claimant, but has sparred with China over the U.S. Navy’s legal right to engage in intelligence gathering within China’s 200 mile Exclusive Economic Zone (EEZ). More important, America has a formal military alliance with Japan which, the president declared, covers disputed territories under Tokyo’s control. Japan recently revised its defense guidelines to improve bilateral cooperation against the PRC (in contrast, Tokyo promised little assistance for U.S. security objectives). Washington’s military relationship with Manila is looser, but Philippine officials are seeking a similar territorial guarantee. The United States also views herself as the globe’s dominatrix into whose hands every dispute is properly remitted.

The Obama administration has escalated U.S. involvement by sending American aircraft over islands reclaimed by China and discussing joint patrols with Japanese aircraft. The United States and China resolved peacefully but not entirely smoothly the problems surrounding the crash-landing of the EP-3 spy plane in 2001 and subsequent maritime incidents. A future clash could pose greater challenges.

None of the claims generating so much controversy is worth war. China is carefully using “salami-slicing tactics,” successively grabbing small pieces of a larger whole to avoid a conflict. But who is prepared to fight even for the larger whole?

Most of the islands or islets are intrinsically worthless and provide little security value. Maritime rights are affected, but in peacetime the difference wouldn’t matter so much; in wartime everything would depend on the capabilities of the contending navies. The economic benefits from control could be substantial but still relatively small compared to the sizable economies of most of the claimants. Peaceful joint development would release whatever hydrocarbons lurk beneath the territory’s surface at less cost and little risk.

For many, if not all of the countries involved in the territorial disputes, national ego rather than juridical niceties is the primary issue. It is good when the latter coincide with the former, but as the young American republic demonstrated 170 years ago, facts often mean little in territorial disputes. Legal rights depend on a complex interplay of national history and control, international law and treaty. Beijing’s extravagant claims look, well, extravagant, but they are not without varying degrees of legitimacy. They certainly are as good as those made by the United States of America against Mexico and Great Britain.

While everyone officially agrees that territorial disputes should be settled peacefully, the rising power China has an obvious incentive to rattle its saber, if not draw the weapon. Beijing is a revisionist power, coming late to the international table to challenge existing claims and create new facts on the ground (or in the water). Moreover, the PRC finally possesses a navy which matches that of Japan and greatly exceeds that of other affected states.

What should the United States do? Pressure is rising, domestic and foreign, for a more actively negative policy toward China, to make Beijing pay “a price” for its increased aggressiveness, especially in East Asia. Yet such an approach would endanger America.

While these interests are more than nominal, they must compete with the ideas that faced Britain and Mexico nearly two centuries ago in facing America: over what is one willing to risk war with a power on the rise and only likely to grow stronger? In particular, how would the future look if conflict comes today?

Of course, the theory prevalent in Washington’s pro-war precincts is that a whiff of gunpowder on America’s part would deter a war on China’s part. Perhaps—for a time. However, the world is not static, as Britain clearly understood when it appeased, by negotiating a disadvantageous settlement, the growing American republic. The course of future U.S.-China relations remains open. For Washington to attempt to coerce the PRC over interests viewed in Beijing as important if not vital guarantees a much more confrontational relationship. China likely would respond by matching American air and naval maneuvers, accelerating military outlays, and challenging U.S. interests elsewhere. Indeed, turning today’s regional dispute into a quasi-superpower confrontation would raise the stakes and make the issues harder to resolve. Americans should reflect on how they would respond to such a challenge—and to how they responded to threats in the past, going back to the so-called Barbary Pirates.

Nor is maintaining the overly large and expensive military necessary for Washington to project power thousands of miles from home a sustainable policy over the long-term. Hawkish Rep. J. Randy Forbes forthrightly demands that the United States retain “escalation dominance” over China and the continuing ability to “overcome China’s growing anti-access and area-denial systems” so as to “intervene decisively” on behalf of “allies and partners.” However, it costs far more to build carriers than to sink them. American economic dominance will continue to fade and federal budget difficulties will continue to worsen as the Baby Boomer generation fills Medicare and Social Security rolls. Americans, young and old, are unlikely to heed a clarion call for sacrifice to ensure that the Senkakus stay Japanese and Filipino flag remains atop Scarborough Reef.

In contrast, it would cost Beijing far less to bolster its military to further increase the cost of U.S. intervention. Moreover, the Chinese people likely would be willing to spend and risk much more to ensure that contested territories end up Chinese. Even younger, liberal students overwhelmingly appear to believe the contested islands are Chinese.

This makes the status quo so dangerous. “All Chinese believe these territories belong to China,” one university student informed me after I finished speaking at a seminar on the peaceful resolution of competing territorial claims. Most Japanese, Filipinos, Vietnamese, and others also believe that the disputed lands and waters belong to their respective countries. But virtually no American has the slightest interest in what belongs to whom. Yet hawks like Forbes would place Americans in the middle of these complex, potentially violent disputes.

Indeed, American intervention is making the situation more dangerous. Backing Japan and the Philippines shifts the costs of confrontation from Tokyo and Manila to America (without any commensurate benefit transfer). Neither ally is inclined to compromise or even to negotiate so long as it believes it is shielded by America’s nuclear arsenal. Whether ambitious, nationalistic Japan or perpetually crisis-ridden Philippines is the more dangerous party is anyone’s guess. Yet America is allied to both. In turn, China can hardly believe, to paraphrase one Chinese general, that the United States would risk Los Angeles for Tokyo or Manila. What happens if a frightened, careless, or ambitious sailor or airman fires a shot? And a frightened, careless, or ambitious politician backs him up?