China and Other Issues Between Japan and South Korea 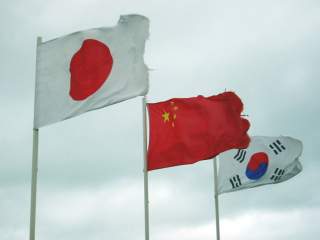 History weighs heavily on East Asia. Relations among Russia, China, India, South Korea, Japan, Taiwan, Philippines and other states are heavily influenced by past wars, conquests and colonialism. To Washington’s enduring frustration, its two most important democratic allies, Japan and the Republic of Korea, have been at odds for decades, their relationship poisoned by Tokyo’s half century of rule over the once united Korean kingdom.

The divergence between the two grew especially sharp over the last couple of years, during which ties between Seoul and the People’s Republic of China notably warmed while those between Japan and the PRC sharply deteriorated, driven by the dispute over the Senkaku/Diaoyu Islands. Moreover, South Korea had its own contentious territorial contretemps with Tokyo. Jokes were made over whether the U.S. Army would be obligated to fight against the Marines Corps if America’s two allies came to blows.

Both parties deserved blame. The South was determined to hang onto emotional grievances—serious and real, but long past. Japan insisted on justifying indefensible actions whose perpetrators were long dead. Domestic politics yielded objectively foolish behavior and prevented collaboration between two states which face similar geopolitical challenges, including North Korean belligerence and Chinese assertiveness.

At the end of December, however, the two countries tried to put the issue of the “comfort women” behind them. Beginning in 1931, with Japanese military operations in China, Tokyo created brothels for its soldiers. For years Japanese officials insisted that the women were prostitutes voluntarily engaged, when it was obvious that the occupying army was none too gentle in its “recruitment” methods, dragooning girls as young as ten. The majority of women so abused came from Korea.

The survivors long demanded both an apology and reparations. One can argue against both on principle: those in power today had nothing to do with yesterday’s atrocities and World War II’s losers, wealthy though they may be, could never reimburse all the victims, starting with tens of millions of dead. However, refusing to even acknowledge the justice of the comfort women’s claim understandably enraged those who had been treated so obscenely.

In their recent agreement, however, Japan apologized and created a compensation fund. In return, the ROK agreed to drop the matter and “address” the issue of the private statue of a young girl, representing the comfort women, facing the Japanese embassy in Seoul. From Washington came a large sigh of relief.

It’s an important step forward, but does not yet close the issue. Both leaders have been called ‘traitors’ by domestic critics. South Koreans have protested and termed the accord ‘humiliating.’ The Korean Council for the Women Drafted for Military Sexual Slavery by Japan, a group representing the victims, questioned the sincerity of the apology and disparaged the form of compensation. President Park Geun-hye is burdened by her father’s rule: Park Chung-hee served in the Japanese army and normalized relations with Tokyo in 1965.

International reverberations also could be important. Comfort women in the Philippines and Taiwan are organizing to seek similar recognition. A skillful response might ease Japanese relations with several neighbors.

Unsurprisingly, the PRC denounced the agreement. For Beijing, at least, it is hard to imagine a statement which would satisfy. China maintains a museum located at Marco Polo Bridge, where the China-Japan conflict began, with the sole purpose of detailing Tokyo’s sordid crimes. In criticizing the accord, Beijing cited the plight of Chinese Comfort Women. Japan must “face up to its history and take concrete actions to win the trust of its Asian neighbors and the international community,” said Foreign Ministry spokesman Lu Kang.

Of course, that is precisely what Tokyo has been doing. It previously moved ahead with relations with India. Manilla has publicly urged Japan to do more to promote regional security. Tensions never have been as great with Taiwan and Australia. Now the South Korean government is moving forward.

Most interesting are the implications for the Japan-Korea-China triangle. An unnamed State Department official called the agreement “strategically consequential.” While Tokyo and the ROK have been at odds, Beijing and Seoul have ostentatiously embraced, with President Park meeting PRC President Xi-Jinping several times, most recently last September, when she attended the military parade commemorating the end of World War II. This has simultaneously hindered U.S. efforts to isolate and contain China and added pressure on North Korea to moderate its behavior.

The PRC’s warm feelings toward South Korea may ebb a bit as a result of the pact, but what Seoul does next is likely to matter far more. After all, Beijing cannot easily criticize another government—the sort of interference with internal affairs which it routinely decries when directed in its direction—for resolving a conflict with another state. Moreover, the bilateral economic ties are too important great for the two nations to drift apart. China now trades more with the South than do the U.S. and Japan combined.

Moreover, while the pact opens the way for expanded military cooperation between the ROK and Seoul, President Park is unpopular and nearing the end of her term. More important, the two nations face very different security situations. In contrast to Japan, the South fears North Korea more than the PRC. The DPRK remains an existential threat. The historical and territorial disputes between Beijing and South Korea are very unlikely to lead to war. Thus, irrespective of Washington’s wishes, it makes sense for Seoul to continue to prioritize its relationship with China over that with Tokyo. Japan has little desire to get sucked into a land war on the Korean peninsula, while worrying mightily about Beijing’s naval advances.

Only if the ROK appears to actively join America in seeking to contain the PRC might Chinese-South Korean relations suffer. And Seoul is unlikely to make that mistake. The giant next door will always be there.

The South Korean-Japanese settlement is a positive step. But while it will ease tensions between America’s two top allies, it isn’t likely to turn their relationship into a new anti-China axis.