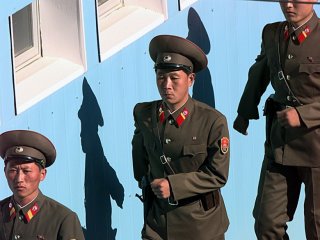 North Korea’s nuclear test last week, its fourth in a decade, seemed to take the world by surprise. Upon closer examination, it becomes clear that it was just a matter of time. While it may seem like the story’s over, one can be sure that Pyongyang has its sights fixed on a fifth test.

The good news is that, one week on, it appears almost certain that North Korea did not detonate a true hydrogen bomb—thousands of times more powerful than the atomic weapons that destroyed Hiroshima and Nagasaki—and the international community is rightly breathing a collective sigh of relief. But it must also keep its eye on leader Kim Jong-un’s endgame. Therein lies the bad news.

This latest test signals that the regime remains steady on a path towards developing more sophisticated nuclear weapons and a missile system to deliver them. Unless we find a way to block that path, North Korea will almost certainly build a nuclear arsenal capable of threatening the west coast of the United States.

What on Earth is motivating the regime, and what can be done to stop it?

In the months ahead, there will be the usual round of tit-for-tat escalation and de-escalation with North Korea: government condemnations, more sanctions, and a greater display of military assets. There may even be loose talk about regime change. But without truly understanding North Korea’s strategic priorities and taking a smarter approach, our usual reactive, make-us-feel-better response will get us nowhere.

The North Korean leadership’s number one goal is regime survival. To accomplish this, it has steadfastly pursued three strategic objectives: prevent foreign attack and intimidation; preserve the national myth of the regime’s historic destiny; and improve the country’s desperate living standards for elite segments of the population.

North Korea’s nuclear weapons program plainly advances the first two objectives—the bomb makes up for its rapidly deteriorating million-man army, and possessing it shows its countrymen and women that the regime is an ‘elite member’ of an exclusive international club.

Less obvious is the role the program plays in the North’s economic thinking. We cannot forget that during his first public appearance as leader, Kim Jong-un promised his people better times. And more nukes means more leverage for North Korea to extract international economic benefits. More nukes also means Pyongyang has the wherewithal to fend off real or imagined threats, allowing it to devote more resources to improving its ailing economy. This approach is similar to China’s in the 1980s, when Beijing turned its attention to economic growth after achieving what it perceived was a sufficient self-defense capability.

If Kim has a similar plan, then North Korea will not be easily swayed to stop testing until it reaches whatever it believes is its magic number of weapons and level of technological sophistication that makes it feel secure. When this happens, we can expect North Korea, from a position of perceived strength, to reach out in earnest to discuss giving up some of its weapons or otherwise limiting its program for payoffs, such as sanctions relief and economic aid. Needless to say, this could lead to any number of potentially alarming scenarios in the meantime, from sparking a regional nuclear weapons buildup to a miscalculation that causes an unintended war.

There is a silver lining to this grim outlook. While there are currently no good or viable options to rolling back the North’s nuclear program, a multilateral diplomatic approach that addressed some of its strategic interests has a chance of at least freezing activity. Rushing to talks with Pyongyang makes no sense and the political obstacles to getting there are great. But eventual engagement is imperative.

When the time is right, the United States, South Korea and Japan would need to talk to the North without preconditions so they can get a better sense of what it wants at the highest levels. It is also critical that we collaborate with the Chinese and move together in lockstep with them. Finally, China must be willing to use significant “sticks” (something it has been loath to do), while the United States, South Korea and Japan must be willing to provide significant carrots as down payments, without preordaining the final outcome. While the long-term goal can and must be a nuclear weapons–free North Korea, making such demands up front to a prickly North Korean leadership would leave us empty-handed.

Make no mistake: North Korea will again surprise the world with more nuclear tests, and succeed in its ultimate quest of a more advanced nuclear program, if given the time. We might be safe today. But if we don’t engage Pyongyang, regime change, and the devastating human and financial cost that entails, might become more than loose talk.

Philip Yun is Executive Director of Ploughshares Fund, a San Francisco-based peace and security foundation. He previously served as Senior Advisor to the Assistant Secretary of State for East Asian and Pacific Affairs and as a senior advisor to two U.S. Coordinators for North Korea Policy - former Secretary of Defense William J. Perry and former Under Secretary of State Wendy Sherman. Mr. Yun was a member of a government working group that managed U.S. policy and negotiations with North Korea under President Clinton and was part of the U.S. delegation that traveled to North Korea with Secretary of State Madeleine Albright in 2000.