The World's Most Important Relationship: U.S.-Chinese Ties on the Eve of the APEC Summit 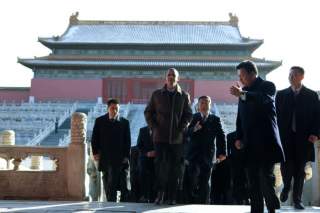 As President Obama heads to Beijing for the APEC summit next week, Harry J. Kazianis, Managing Editor of the National Interest, spoke with Dr. Ely Ratner, a Senior Fellow at the Center for a New American Security to discuss U.S.-Chinese relations, China-Japan relations, the Trans-Pacific Partnership and more.

Editor’s Note: Please see an excerpt from Dr. Ratner’s recent article in TNI, “Learning the Lessons of Scarborough Reef.” You can read the full article here.

As the standoff grew tenser, traditional diplomatic channels yielded few results. That communications were poor between Beijing and Manila was partially due to circumstances that had nothing to do with the crisis. The Philippines had yet to fill its vacant ambassadorship to China and the Chinese ambassador to the Philippines was considered ineffective and out of sync with Beijing.