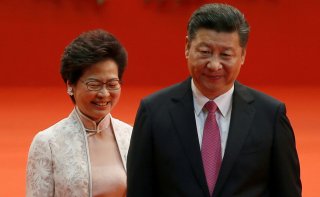 It stirred a hornet’s nest of controversy last month when China, in its latest example of weaponizing trade, issued a set of fourteen demands required for Australia to mend its relationship with its largest trading partner. There is both an intended ironic historical statement behind it and a troubling canary-in-the-coalmine signal that it conveys.

Such economic coercion, like a 169 percent tariff on Australian wine, are now familiar yet outrageous responses. So, too, is targeting the National Basketball Association, cutting off rare earth minerals to Japan, or boycotting Philippines bananas—any behavior that offends the prickly sensibilities of the Chinese Communist Party (CCP) results in vindictive retribution. It may be tempting to write it off as the antics of an immature great-power country.

But the history behind China’s gambit with Australia is ominous. A century ago, Imperial Japan, building its Greater East Asia Co-Prosperity Sphere issued the now infamous Twenty-One Demands. They ranged from diktats for the Chinese economy to inserting Japan into its governance—in short, to make China a protectorate. We know how that story turned out.

The point is that China’s fourteen demands are a very conscious reprise, suggesting a sort of intended neo-tributary status for Australia. China’s demands range from rejecting criticism of its actions regarding Taiwan, rejecting Canberra’s call for an international investigation on the origins of the coronavirus and its treatment of Uighurs. Additionally, China wants think-tanks to cease writing reports that question China’s Belt and Road Initiative. Yes, this is more excessive than much of China’s other economic coercion but the pattern is unmistakable even if the difference is a matter of degree.

As the global backlash to China’s imperious behavior grows, this Australia incident should be a tipping point. Like-minded nations need to collectively stand up and say: this shall not stand, we cannot do business this way with China. To move in that direction, we offer Ten Demands that the world community should make of China.

China’s bad century is long past. Without Richard Nixon where would Beijing be today? It is time for it to give up the culture of victimization. As Foreign Minister Yang Jiechi reminded the ASEAN Regional Forum in 2010, “China is a big country and ASEAN are small countries.”  As a “big country” China should be able to take criticism. Imagine if every time a U.S. president was criticized, it responded with punitive coercive action;

Play By the Globalization Rules

Xi Jinping publicly embraces: At the 19th Party Congress in 2017, a commitment to deepen new economic reforms has been largely ignored. A central commitment: “The core principle of economic reform is the “decisive” (决定性) role of market forces in allocating resources role in resource allocation. If Beijing simply implemented its promised economic reforms 75 percent of the U.S. trade grievances would be met. Start with agreeing to WTO reforms ending “developing nation” status and to transparency on subsidies.

The Basic Law in Hong Kong extends to 2049, the Law of the Sea Treaty you ratified and which is disregarded by your aggressive maritime behavior in the South China Sea.

Respect the International Court of Justice at the Hague Ruling

The international community has passed judgment on China’s imaginary South China Sea territorial claims, so it should scrap the phony, contrived, Nine-Dash Line. It should agree to a binding code of conduct for the Western Pacific and a freeze on new construction. President Xi Jinping should honor his commitment to President Barack Obama not to militarize island construction in the South China Sea

If China wants to promote globalization, then that’s fine, but it is not possible if the global community can’t understand where the party-state ends and the private sector begins. Free Jack Ma.

Agree to a WHO-Led International Investigation

China must allow the world to learn more about the origins of the coronavirus. This is not to find blame, but to find the truth so as to prevent future pandemics. There is a gap between Dec. 29, when Beijing knew the virus was spread by humans, to Jan. 23, when it revealed to the world, there was a coverup.

Stop Invading the Economic Zones of Others

China must stop sending its fishing industry around the world to deplete fish stocks. Under UN auspices, it must negotiate at the East Asian Summit an Asia-Pacific region sustainable fishing regime.

It is time for China to move on from the myth of “internet sovereignty.” Beijing must learn to cooperate with the World Trade Organization talks on e-commerce norms; it must learn to appreciate the free flow of data and remove data-localization restrictions. Chinese Big Tech will benefit. Globalization, which Xi has championed, thrives on the free flow of information.

China should be transparent about its nuclear weapons. The United States and Russia keep track of one another’s nuclear weapons and can inspect them. If New START is extended, then China should use that opportunity to open a trilateral dialogue focused on transparency, and reducing mutual risks to crisis stability from emerging tech (artificial intelligence, offensive cyber, anti-space, and hypersonic missiles.)

Irrespective of how China might respond to such demands, relations with the United States and other rule-of-law based nations will be one of strategic competition. But a key issue is the degree to which China is prepared to adhere to the rules, including the ones that it has helped to shape. Accepting rules-based restraint is the basis upon which the post–World War II order was organized. It would be the difference between a China that, as a rising great power mostly wants to bend the international system to better reflect its weight and interests, versus a wholly revisionist China that seeks to create an alternative system.

Regardless of which path Beijing chooses, a stable equilibrium will require a coalition comprised of the United States, the EU, Japan, Australia and other like-minded nation-states to gain ample leverage to check China’s power. Meeting the ten demands set above could open the door to shifting the balance from one dominated by competition and rivalry to an era of sustainable great-power cooperation.

Robert A. Manning is a senior fellow of the Scowcroft Center for Strategy and Security at the Atlantic Council. He was a senior counselor to the under-secretary of State for Global Affairs from 2001 to 2004, a member of the U.S. Department of State Policy Planning Staff from 2004 to 2008 and on the National Intelligence Council (NIC) Strategic Futures Group from 2008 to 2012. Follow him on Twitter @Rmanning4.