On Thin Ice: Does the EU Know What It Wants in the Arctic? 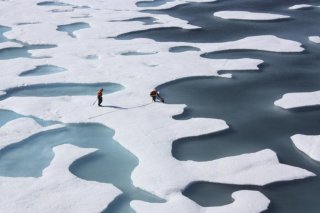 The European Union (EU) is in the Arctic. At least that is the soundbite associated with the newly tabled Joint Communique on EU Arctic Policy. Of course, this is something we already knew. EU-member states Finland and Sweden are well and truly Arctic states with some territory above the Arctic Circle; three of the Arctic-8, which consists of the states with territory above the Arctic Circle form the region’s central governance forum, the Arctic Council, are also EU states; a further two Arctic Council states—Iceland and Norway—have close partnerships and are in the EU’s European Economic Area (EEA). States deemed by the Arctic Council to have a clear and relevant interest in the region are ushered in via an Arctic-8 consensus vote as “observers.” Six of these thirteen “non-Arctic” states holding observer status are EU members. Pre-Brexit, this would have been seven.

EU Arctic interests don’t end there. Security challenges associated with a changing Arctic climate and indeed environmental catastrophes know no sovereign borders. What happens in the Arctic certainly doesn’t stay there; EU trade relations and member-state economic ties to the Arctic are substantial across fisheries, critical resources, and energy ventures. Additionally, sea lines of communication for the European Union have always meant the North Atlantic, and the High North by extension, have been of strategic interest for the EU to keep free and open. Furthermore, while Greenland (holding autonomous status in the Kingdom of Denmark) formally exited the EU in 1985, Nuuk never left Brussels, with Greenland remaining in the EU’s Overseas Country and Territories basket. Under various engagement agreements there are strong bilateral ties, so plans highlighted in the new EU Arctic policy to build an outpost of “permanent presence” is just the EU signaling visibility.

The EU has long been very much a part of the Arctic geopolitical narrative. So, is this policy a carefully crafted “strawman” to carve out even more strategic relevance for the EU in the Arctic? Not entirely. The strong linkages wedding the EU to the Arctic indeed necessitate enhanced attention and strategic bandwidth from Brussels. But this 2021 communique is more of an “affirmation document” on EU Arctic values and ambitions—it is not a strategic document or a concrete set of policies. Of course, the complexity of domestic EU political agendas and EU-state unilateral Arctic interests are not about to make any EU Arctic policy coordination easy. This is probably why the document fails to (or perhaps opts out of) defining the Arctic. It is easy for the EU to grasp the strategic stakes in the Arctic and know full well where its interests are undermined or threatened, but it is an entirely different task to mobilize competing Arctic stakes from within the institution.

The document itself is nuanced and considered, speaking of Arctic geopolitical competition in terms of “possible tensions” and intensified activity that could “possibly” threaten EU interests. It is essentially positioning the EU to scale up its engagement to ensure a “peaceful, sustainable, and prosperous” Arctic. This sentiment is surely welcome as these three values are broadly shared across Arctic stakeholders today. In a masterstroke, no new governance forum or international legal architecture for the Arctic zone was tabled in the communique. Previous EU Parliament resolutions signaled Brussel’s intent to push for an “Arctic Treaty” akin to the Antarctic Treaty, applying at minimum to the Central Arctic Ocean. Brussels knows where it stands in the governance sphere.

Ironically, EU visions of “enhanced” engagement could disrupt the broadly “peaceful” Arctic zone. Moscow, the Arctic’s largest stakeholder by sheer geography, was always going to be suspect when it came to Brussel’s venturing north. Yet, Russia is not alone in its EU apprehension. The EU has sat in Arctic Council limbo since 2013. For almost a decade, the EU has been allowed to “observe” Arctic Council proceedings, whilst garnering no recognition of observership. This situation is as much a political signal to the EU to recognize institutional reach as it is an issue of internal Arctic Council membership disagreement on “opening up” the Arctic clubhouse.

There is also somewhat of a disconnect between the communique’s vision for a “sustainable and prosperous” Arctic and Arctic realities at play, considering the push to ban new resource development. This call to action, while not a policy position per se, does underscore the EU’s ambition to “work with partners towards a multilateral legal obligation not to allow any further hydrocarbon reserve development…nor to purchase such hydrocarbons.” Arctic-rim states are energy producers and exporters. Norway and Canada have recently green-lit further resource exploration and development projects in their Arctic zones. Mega-liquified natural gas (LNG) projects in the Russian Arctic not only have long-term contracts in place with EU customers (Yamal LNG ships to Belgium, Spain, the Netherlands, and France), but EU-states (particularly Italy and France) also hold ownership stakes in Russian Arctic energy ventures. Much of the Arctic’s socio-economic structure relies on resource extraction and development industries. Therefore, any “ban” on Arctic hydrocarbon development or transactional engagement in the sector is rather perplexing—how does this work in practice? Arctic-rim economic prosperity would be obliterated.

Indeed, “sustainability” is a shared interest across the Arctic. Sustainable economies built on sustainable resource development policies are now commonplace in Arctic planning—from Washington to Moscow, across the Arctic-state community. Innovation across the Arctic in technological advancements as well as adaption to the “green economy” is occurring across the Arctic theater. Hydrogen is increasingly harnessed to power Arctic shipping and large shipping vessels are moving from diesel-electric engines to LNG power. Granted, there is much room for improvement, but for these ongoing mitigation processes, plenty of new energy technologies are coming online to enable industrial shifts to reduce carbon footprints.

The policy begins with the notion that “the EU’s full engagement in Arctic matters is a geopolitical necessity.” This is a concept worth returning to: does the EU know what it wants in the Arctic? While this new Arctic document frames the institution's interest around “engagement,” leadership, and a moralistic sense of duty, is EU interest more about influence? An evident intra-EU political dance has been carefully orchestrated to deliver a useful guidance tool for framing EU Arctic interests. However, much of the EU’s stated Arctic ambitions are largely at odds with the socioeconomic and development interests, geopolitical realities, and the grand plans of the Arctic states themselves. Sure, the EU is in the Arctic. But nobody is any closer to understanding why.

Dr. Elizabeth Buchanan is Lecturer of Strategic Studies at Deakin University, based at the Australian War College, and Fellow of the Modern War Institute at West Point.