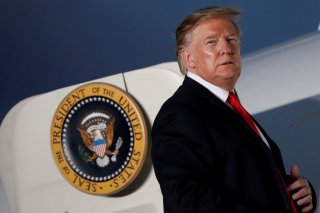 A fundament of Donald Trump’s get-tough policy on China has been Taiwan, whose security it has bolstered more than any other administration. But there is one more important step the president can take: travel to Taiwan or send his vice president or secretary of state there.

Trump’s relationship with Taiwan started on a sharp and positive note. Shortly after his election, he took a call from Taiwanese President Tsai Ing-wen congratulating him on his victory. Such calls are routine and humdrum in most instances, but because of the ridiculous diplomatic constraints placed on Taiwan to the benefit of communist China, this one was remarkable. No other president or president-elect had spoken directly with Taiwan’s leader since Jimmy Carter downgraded America’s diplomatic relations in 1978.

However, Trump likely stopped short of seeing Taiwan as an asset as opposed to another in the long list of U.S. liabilities and unproductive alliances he wanted to reform. If Trump understood the cultural and political usefulness of Taiwan and its free people in undermining the basic justification for the Chinese Communist Party—that ethnically Chinese people require tyranny to avoid chaos—he kept it to himself. He also likely harbored quiet doubts about whether Taiwan would fight if China attacked, holding out long enough for help to arrive from America.

But notwithstanding this lack of enthusiasm, Trump had his administration elevate ties with Taiwan and sell it game-changing weapons—an approach that infuriated China hands and the foreign policy establishment, but which has had bipartisan support in Congress. Trump sent Health and Human Services Secretary Alex Azar to Taiwan, the first visit by a U.S. cabinet secretary in decades. EPA boss Andrew Wheeler may follow suit shortly.

Trump officials led by deputy national security advisor Matt Pottinger worked with Taiwanese officials and mowed down bureaucratic obstacles in Washington to sell arms with a new goal. Instead of marquee sales symbolizing political support like the F-35 fighter jet—the most expensive jalopy in world history—Washington and Taipei agreed on modest waves of arms sales that are sophisticated but not particularly cutting edge. Trump sold Taiwan weapons like F-16 aircraft, torpedoes, surface-to-air missiles, air-to-ground missiles, and, most recently, mobile anti-ship Harpoon missiles. The idea is to raise the costs of the Chinese invasion that Beijing frequently threatens by making Taiwan a “porcupine,” hard to swallow whole. Even the M1 tanks Washington sold Taipei can be used to shoot at Chinese landing craft.

In a sense, Trump was just complying with the Taiwan Relations Act, which requires the executive branch to sell Taiwan weapons necessary for its self-defense. But prior U.S. administrations had failed to meet this standard, abetted at times by the soft-on-China KMT party, which was recently relegated to near-irrelevance by Taiwanese voters. Under Trump, Washington and Taipei collaborated on the fastest, most efficient steps to create enough doubt in the mind of Chinese leader Xi Jinping about whether Chinese plans to stun the island-nation into submission with a missile attack and invasion would really work.

Additional obvious steps to deter China like joint military training and a joint military command, similar to what the United States has with Japan and South Korea, will have to wait. But one thing Trump can do to put an appropriate capstone on his policy is visit Taiwan or send Vice President Mike Pence or Secretary of State Mike Pompeo as his representative.

The bellyaching from the foreign policy establishment alone would make the trip worthwhile. They would say he is violating the One China Policy, encouraging Taiwan to declare formal independence from China, and ruining plans for Joe Biden to engage Xi on cordial terms. If only. In reality, it would violate no agreement with have with Beijing, give confidence to the Taiwanese people to maintain the political status quo, and allow Biden to play the good cop compared to Trump.

But the real reason to do it would be for its importance for the American people, and for Taiwanese looking down the barrel of a Chinese gun. No American needs reminding of the challenges of 2020, the acrimony of recent years, or of doubts about America after Afghanistan and Iraq. Were Trump, Pence, or Pompeo to visit Taiwan, he would be greeted by cheering crowds exceeding those welcoming President John F. Kennedy during his visit to West Berlin in 1963. The outpouring of excitement and gratitude would be remarkable. It would be the ultimate personification of gratitude not just for a president who stood up to China, or a vice president or secretary of State who eloquently defended those resisting Beijing in Hong Kong and throughout Asia, but of gratitude for the American people.

In effect, the Taiwanese would be reminding us of who we are: that contrary to the moaning and lies of the progressive Left, America has a remarkable and enduring history of freedom and of helping others defend freedom. And we would be reminding China’s illegitimate government that we have its number. Get on a plane and go.

Christian Whiton is the author of Smart Power: Between Diplomacy and War and a Senior Fellow at the Center for the National Interest. He was a State Department senior advisor during the George W. Bush and Trump administrations.