Time for a European Nuclear Deterrent? 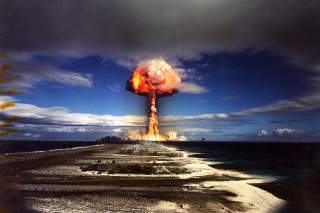 After spending a quarter century treating NATO as an international social club to which every reasonably civilized European nation should belong, the alliance has begun to focus again on its original role as a military alliance. Rather than expect the United States to burnish NATO’s nuclear deterrent, European nations should consider expanding their nuclear arsenals and creating a continent-wide nuclear force, perhaps as part of the long-derided Common Security and Defense Policy.

Since its creation, NATO has stood for North Atlantic and The Others. America dominated decision-making, spent most of the money, provided most of the forces and offered a continental security guarantee, both conventional and nuclear. France and Great Britain created their own nuclear forces, but they likely would have been reluctant to engage in a nuclear war with the Soviet Union to protect West Germany, then the most vulnerable NATO member. If any country was going to engage in nuclear exchanges with Moscow, it would have been the United States.

That almost certainly remains the case today. European tensions with Russia have greatly increased, mostly tied to Moscow’s seizure of Crimea and support for separatists in Ukraine’s east. There is no evidence that the Putin government intends to start an aggressive war against Europe, and no alliance member, including the Baltic States and Poland, has boosted military outlays as if it believes conflict is imminent. Rather, the Europeans have concentrated on demanding that America do more.

That’s certainly the case when it comes to nuclear weapons. In a study last year for the Atlantic Council, Matthew Kroenig argued: “In order to deter the Russian nuclear threat, NATO needs to realign its priorities by increasing the importance of its nuclear deterrence mission and considering possible modifications to its conventional and nuclear posture.” In his view, deterrence should return as the alliance’s nuclear priority.

While Kroenig’s discussion is about NATO infrastructure and doctrine, any additional weapons likely would be American—Washington currently shares control over U.S. nukes with several alliance members—and the country most in Russia’s retaliatory sites would be America. Since two European nations possess nuclear weapons and others could develop them, why should the United States remain the country expected to bring Götterdämmerung to life?

Kroenig noted that, “NATO must be able to deter a Russian nuclear attack, counter the nuclear coercion inherent in Russia’s hybrid warfare strategy and assure NATO members that the Alliance is prepared to defend them. This will require strengthening NATO’s existing nuclear deterrence strategy and capabilities.”

But who within NATO should do the heavy lifting? Do Americans really want to use nuclear weapons to defend Europe? Is it truly in America’s interest to do so?

Europe is a great tourist destination, but is its defense today worth the risk, even if very small, of incinerating a large portion of America’s population? The Soviet Union was an ideological and global competitor to the United States. During the Cold War, Moscow’s domination of the more populous and productive Western European states would have made for a much scarier world.

Very different is Russia, which looks a lot more like pre-1914 Imperial Russia with far more bounded ambitions. Moscow’s present aggressiveness is unpleasant, but not particularly threatening to the United States. Putin’s Russia appears most interested in respect for its interests and borders. It is hard to imagine a scenario in which the reformed Red Army would again drive on Berlin, let alone Paris.

If anyone is at risk, it is the three Baltic States, though Moscow would gain little benefit from attacking them while the costs would be significant—diplomatic isolation, full economic sanctions, permanent new Cold War and likely military conflict with the Western powers. Nothing in Russia’s posturing today looks like the opening salvo of an expensive Russian blitzkrieg over a geopolitical cliff.

And if Putin surprised in a bad way, does defense of the Baltics warrant Washington taking steps that could bring nuclear war to the American homeland? Of course, more vigorous action is advocated as a means to deter Moscow. But if Putin fears not the obviously severe consequences today, why assume he would fear the augmented consequences tomorrow? To threaten to use nukes suggests being willing to actually use them if necessary, and bear the horrid consequences afterwards.

In this case for what?

To protect a continent which appears to have little interest in arming itself? “Old Europe,” in Rumsfeld-speak, has shown a particular lack of enthusiasm for aiding “New Europe.” Only the specter of Donald Trump becoming president appears to have caused a few European nations to reluctantly do a bit more. But the difference is hard to notice. Berlin is highlighting its eight percent hike in military outlays—which still leaves Germany spending only about 1.22 percent of GDP on its armed forces.

Nuclear nonproliferation is a worthwhile goal, but not if it increases the likelihood of America being involved in a nuclear war. If anyone should take that risk for Europe, it should be European nations. Britain and France already have nukes. Although they might prefer not to tie use of such weapons to the security of other states, why should America do so to them?

A possible solution would be to create European nuclear deterrent through contributions from member nuclear states. Roderich Kiesewette, a Bundestag leader on foreign policy, suggested turning to Britain and France, with a build-up financed by a joint European military budget: “If the United States no longer wants to provide this guarantee, Europe still needs nuclear protection for deterrent purposes.”

However, it would be hard for Germany to avoid joining such the nuclear club. No doubt, history would make such a decision controversial, and the German people have shown little desire to play such a role. But those concerns do not justify expecting the American people to act as defenders of last resort for Germany and Europe.

Berthold Kohler, a publisher of the conservative Frankfurter Allgemeine Zeitung, followed with the suggestion that Germany might need to augment the small British and French arsenals to successfully confront Russia and maybe China. The Carnegie Endowment’s Ulrich Kuehn called such musings “an important early warning sign.”

However, a nuclear Germany isn’t a new idea. It came up during West Germany’s rearmament and induction into NATO. Chancellor Konrad Adenauer advocated possession and use of American tactical weapons and capability to make German warheads. The latter proposal deserves a full debate today.

For much of the foreign policy community, what has always been must always be is the guiding mantra. The incoming Trump administration is likely to provide greater opportunities to rethink Washington’s conventional wisdom.

One policy which deserves rethinking is extended deterrence in Europe. The continent already has two European nuclear states as members of NATO. Instead of expecting the United States to risk a nuclear exchange to protect Europe, the Europeans should take over that risk. With their continent already hosting two nuclear states, it is time to ask whether that number should grow.