Time to Let Japan Be a Regular Military Power 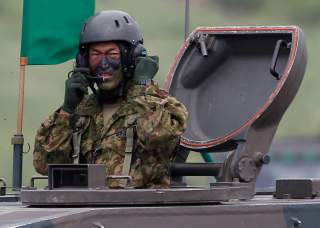 The Japanese people don’t much like Prime Minister Shinzo Abe. In fact, a majority of them want someone else as premier. Yet his coalition just retained its two-thirds majority in snap parliamentary elections. He should use his reinforced authority to end his nation’s defense dependence on America.

However, the breakdown of the wartime alliance with the Soviet Union and creation of the People’s Republic of China caused Washington to flip-flop and favor a rearmed Japan. Japanese policymakers relied on creative constitutional interpretation to establish a “Self-Defense Force.” Still, Tokyo relied on its constitution as well as popular revulsion to war to both cap military outlays and restrict the SDF’s role—which, conveniently, helped ensure continued American protection.

Japan’s neighbors, many of which suffered under Tokyo’s brutal wartime occupation, were happy to have Washington forestall full Japanese rearmament. America served as the “cap in the bottle,” famously said Marine Corps Gen. Henry Stackpole. Japan was not without friends, such as Taiwan, but South Korea, Philippines, China and Australia were particularly antagonistic to an expanded security role for Japan. Moreover, in the last two decades Tokyo’s economic difficulties much increase in military—sorry, SDF—outlays.

The PRC has sprinted past Japan and now spends upwards of four times as much on the military. Moreover, Beijing possesses a modest nuclear arsenal. Although in a war between the two Japan would be no pushover, its defense outlays have remained roughly constant in real terms, ensuring a growing bilateral gap. Warned Jeff Kingston of Temple University in Tokyo: “There is right now a one-sided arms race that China is winning.” (Without irony, China Daily USA editorialized against the “bellicose Abe” for increasing military outlays even though Japan “certainly doesn’t need such military equipment for national security.”)

North Korea adds another challenge. Although Pyongyang’s conventional forces have little reach beyond the Korean Peninsula, the Democratic People’s Republic of Korea possesses a nascent nuclear capacity as well as chemical and likely biological weapons. Missiles make Japan a possible target as an ally of the United States or victim of extortion.

In 2014 the Abe government changed its interpretation of Article Nine to allow a limited form of “collective security,” including assisting American personnel under attack. Tokyo followed with legislation and revised Guidelines for Japan-U.S. Defense Cooperation the following year.

These changes, though controversial, were modest. Although collective self-defense finally is considered legitimate under the constitution, such action is authorized only under extremely narrow circumstances. Japan’s Professor Narushige Michishita observed that the new rules would not allow Japan to defend a U.S. ship if Japan’s security was not directly threatened. Moreover, the government failed to move forward with its plan to revise Article Nine. The failure to do so limits his military options. Argued Indiana University’s Adam P. Liff: “Without formal constitutional revision (at a minimum), however, more ambitious efforts to fundamentally transform Article 9’s interpretation or the scope of scenarios in which Japan can use force overseas are unlikely without major domestic political realignments.”

Abe pushed for such a change by running against North Korea, playing on voters’ fears. With his newly enhanced election mandate, he may move further and faster on security issues. Liff noted that “Strategic and domestic political vicissitudes have been the major drivers of changing interpretations of Article 9.” Defense Minister Itsunori Onodera indicated that the government is considering revising military guidelines to acquire and use weapons, such as cruise missiles, capable of hitting foreign bases. The government also is likely to revive proposals to amend the constitution. There even is some support among elites to consider the acquisition of nuclear weapons.

Still, opposition to such changes remains fierce. In fact, Abe’s coalition partner, the Komeito Party, has been reluctant to join his effort. The Finance Ministry pointed to the government’s massive debt in opposing accelerated military spending. The prime minister’s effort to change the constitution diminished his poll ratings, before Kim Jong-un’s misbehavior helped revive them. Popular sentiment has been shifting, but perhaps not enough. “The Japanese public is still not so sure about this,” observed Richard Samuels of MIT’s Center for International Studies.

Moreover, loosening constitutional restrictions would not be enough. The government would have to accept more cost and risk by adjusting its force structure and foreign policy accordingly. And dramatic change remains unlikely. The Abe government has been hedging, perhaps feeling greater uncertainty over Washington’s continued security commitment. But Tokyo does not want to take over responsibility for its defense. Indeed, Yoichi Funabashi of the Asia Pacific Initiative warned that doing more might “induce or tempt the United States to lessen U.S. commitments to Japan’s defense.”

In contrast, Abe’s government is pushing for an ever-stronger U.S. commitment. One unnamed foreign-ministry official said: “The strategic environment is becoming harsher and we need to discuss how we will respond to that” (emphasis added). Which primarily means Washington. “We will look for the U.S. to reaffirm its defense commitment, including the nuclear deterrent,” declared Onodera as American and Japanese ministers met: “In light of the threat of North Korea, [they] confirmed the importance of the unwavering U.S. commitment to extended deterrence.”

Washington reciprocates such sentiments. The joint statement of the August meeting of the U.S.-Japan Security Consultative Committee confirmed the ministers’ “shared intent to develop specific measures and actions to further strengthen the U.S.-Japan Alliance,” including “maintaining a robust U.S. force presence in Japan.” At the time Secretary Tillerson explained that the two countries “stressed the critical role that U.S. extended deterrence plays in ensuring the security of Japan, as well as the peace and stability of the Asia Pacific region.”

While working to increase America’s entanglement, Japan is pushing an aggressive international response to the North. Foreign Minister Taro Kono said there “should be no dialogue” absent a North Korean demonstration of “a clear intent with regard to denuclearization.” Abe advocated applying “an unprecedented higher level of pressure on North Korea to force it to change policy.” He said countries should unite to deny the North access to “the goods, funds, people and technology for nuclear and missile development.” What is needed, he added, “is not dialogue, but pressure,” and even backed the Washington mantra that “all options” are on the table, meaning war.

In advocating such aggressive policies, it would seem appropriate for Japan to possess commensurate military capabilities. However, Narushige Michishita of Japan’s National Graduate Institute for Policy Studies worried that “defense is all about hedging risk and if you seek perfect defense, the cost would be enormous.” From Tokyo’s perspective, why pay the bill when you can hand it off to Washington?

Tokyo’s strategy is good for Japan, not America. Yet U.S. officials enjoy playing hegemony even as the American people pay the bill. Donald Trump once took a different perspective. Two years ago Trump, when asked about China’s threat to the region, observed, “If we step back, [America’s allies] will protect themselves very well.” He asked: “Why are we defending them at all?” Since then, however, he has turned into his predecessors, including the hated Barack Obama.

Of course, some argue that the United States occupies East Asia for its own security. That was the case at the end of World War II. But the Cold War is over, Russia is a shadow of the Soviet Union and Japan has recovered economically. Tokyo is well able to defend itself, as well as cooperate with its neighbors to ensure regional security.

Some analysts look beyond Japan. Argued David Feith of the Wall Street Journal: America’s fifty thousand personnel in Japan are “Washington’s most valuable asset for deterring conflict across the region.” Others make the same claim, but never offer any convincing support. What war are U.S. troops supposedly preventing?

China and Japan, though at odds over the Senkaku/Diaoyu Islands, don’t appear to be at the brink of war. Could conflict erupt? Anything is possible, but there’s still no reason why wealthy Japan should not do the deterring. The Marine Expeditionary Force based on Okinawa is directed more at a Korean than a China-Japan war, and Seoul should provide the cannon fodder for any war there. Even more so, Washington should avoid a China-Taiwan confrontation: Taipei is a good friend, but not worth conflict with a nuclear-armed great power. Better to arm than defend the island nation.