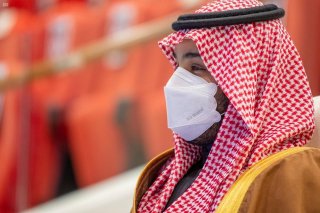 Secretary of State Antony Blinken announced a new visa policy named for murdered Saudi journalist Jamal Khashoggi against the backdrop of the Biden administration’s declassification of a report fingering Saudi Crown Prince Mohammed bin Salman in the murder of the dissident journalist. Known as The Khashoggi Ban, it “allows the State Department to impose visa restrictions on individuals who, acting on behalf of a foreign government, are believed to have been directly engaged in serious, extraterritorial counter-dissident activities, including those that suppress, harass, surveil, threaten, or harm journalists, activists, or other persons perceived to be dissidents,” he explained on Feb. 26, 2020.

Unfortunately, however, it appears that Blinken, like President Joe Biden, simply virtue signals. While Blinken applied the ban to seventy-six Saudis, he neglected to include Prince Mohammed. To publicly finger him, announce a visa policy named after his victim, and then neglect to apply it to the man most responsible for the attack is the utmost cynicism. Maybe diplomats could say they are grandfathering in the ban, but that would not explain why they sanctioned other Saudis. More privately, they would likely acknowledge realism shapes Blinken’s omission: He fears cutting ties with the crown prince because the king’s dementia renders him unfit for the rigors of rule. Prince Mohammed may be odious, but Saudi Arabia has no other ruler.

While Blinken may have fumbled its unveiling, the idea behind the Khashoggi Ban is smart. Independent journalists are essential to democracy and government accountability. Had the Obama and Trump administration called President Recep Tayyip Erdoğan out on his assault on the independent media, then it might have compelled the State Department, America’s European counterparts and NATO to deal with the reality of Turkey rather than buy into the image that Erdoğan sought democratic reforms.

Still, Blinken does have an opportunity to show he is serious about press freedom and that the Khashoggi Ban is not just a publicity stunt to appease a progressive base afflicted with attention deficit syndrome. He might begin with Erdoğan and his inner circle: son-in-law Berat Albayrak who often sues journalists, spokesman (and former Georgetown University professor) Ibrahim Kalin, and former advisor Egemen Bagis. Each has legitimized the arrest of independent journalists. Blinken might also apply a ban to Erdoğan and his bodyguards for the attack on journalists at the Brookings Institution in 2016 or a broader array of dissidents and activists gathered in Sheridan Circle the following year.

Then, again, if Blinken wants to apply a Khashoggi Ban to more recent violators, he might look no further than Iraqi Kurdistan. Just over two weeks ago, Iraqi Kurdish prime minister Masrour Barzani locked up five journalists for six years; they are now on hunger strike. Initially, Kurdish authorities refused to provide a rationale for the arrest of the journalists. Shifting statements about the reasons for the arrest of the journalists highlight the cynicism and dishonesty motivating Barzani’s actions. At first, Kurdish authorities said they had charged the journalists for organizing an illegal demonstration. The final verdict, however, was on espionage charges, apparently because Barzani—who constantly seeks American aid—was upset that Kurdish journalists had talked to diplomats at the American consulate in Erbil.

For Barzani, the targeting of journalists has become a habit. A decade ago, his security forces kidnapped and killed a young journalist for penning a poem lampooning Barzani family corruption. Austrian police arrested him after he ordered his bodyguards to attack a dissident journalist in Vienna who had criticized him. At least some of the journalists now in his custody suffered torture. Masrour may own an ostentatious mansion in McLean, Virginia, where he, his wife and their children sometimes live, but there should be no entitlement to visas to enjoy it. Blinken might need to go further and revoke Barzani’s green card, if he still maintains one, especially given his failure to file income tax returns and report income. Retaliating against journalists for speaking to American officials underscores his antipathy toward democracy.

The real test to see if the principle motivates the Khashoggi Ban or whether it is instead just a tool to bash Saudi Arabia is whether the State Department also sanctions Iranian judicial officials and their families for their role in the execution of journalist Ruhollah Zam. Such action would have more teeth than many expect given the tendency of human rights-abusing Iranian officials to send their children to the United States to study or to seek retirement perches at American universities. Blinken may want to avoid antagonizing Iran with new sanctions, but to do so will not only backfire by signaling to Iranian leaders that they can act with impunity but also show them the emptiness of the Khashoggi Ban.

Biden spent his career in the senate where, like colleagues from both parties, he could pivot and posture on issues to win favorable press coverage. As his long-time foreign policy advisor, Blinken was with his flip-flops every step of the way. True leadership in the executive branch, however, requires more than posturing. It is time to act with principle.