Toward a Global Revolution of Dignity 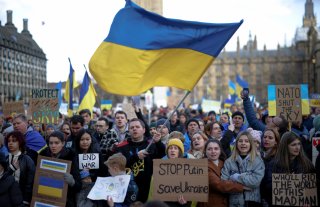 THE UNITED States viewed Russia’s invasion of Ukraine as an assault on democracy itself. Scrappy Ukraine’s triumph over a greater Russian goliath reinforced the Biden Doctrine: the United States must strengthen a democratic community of nations against authoritarian states to pave the way for peace and prosperity.

The recent history of Ukraine, at first glance, gives credence to this narrative. In 2014, Ukrainians overthrew the Russian-backed government of Viktor Yanukovych for prospects of a more democratic order. Curiously, Ukrainians termed the 2014 events “the Revolution of Dignity.” Disgusted by wretched oligarchs, petty corruption, and large-scale graft, they saw Yanukovich’s gold toilet and ostrich farms as a mortal insult.

The revolution made Ukraine more democratic, but it also sought to heal personal wounds of indignation.

Ukrainians are not alone in wanting to be treated as citizens rather than subjects. According to the global protest tracker at the Carnegie Endowment for International Peace, the world is witnessing breathtaking levels of civil unrest. In his book, Revolt of the Public, former CIA analyst Martin Gurri explains why. He says the smartphone age meant state authorities no longer control information flows. The result is relentless protest led by acephalous movements. Revolts can be democratic; they can also take populist forms.

Despite this new era of revolt, the Biden administration has adopted a Cold War-era lens of seeing a battle of democracy versus autocracy. Russia’s invasion of Ukraine sealed this narrative. Yet, this superficial dichotomy explains why democratic backsliding was so easy: democracy promotion celebrates national democratic movements, but often forgot those at the bottom. Like Ukrainians, Zbigniew Brzezinski asseverated that “you cannot have democracy without political dignity.” But what is dignity? I posit a very low bar: it is the right not to be bamboozled and abused by your leaders. It is the right to have leaders that do not steal too much. This is not about a right to healthcare, free housing, or sustainable development goals, but at best the right not to be taken for a ride. At worse, it is the right not to be tortured or insulted. Dignity means a focus on what the state shall not do to you, rather than a focus on what it shall do for you.

For thirty years, the United States promoted democracy with a focus on political parties, parliaments, and elections at the national level. But Brzezinski reminds us that democracy cannot be imposed from the outside but “has to be nurtured by stages and fostered from within.”

Democracy rarely trickled down to communities. But it is at the local level where dignity is created—or destroyed. It is in the daily interactions with predatory officials that citizens lose their trust. When citizens encounter deep indifference, they turn away—until they can’t anymore.

A lens of dignity—not democracy—may help us see a beleaguered Eurasia in a new light. Rather than the epicenter in a battle between democrats and authoritarian leaders, with a lens of dignity, we see demands of indignant publics weary of petty local tyrants that give their children no hope.

This January, Kazakhstan was swept by protests ostensibly over fuel prices. Price hikes in one of the most oil-rich countries in the world reminded citizens of their right not to be treated as fools. Upheaval did not feature prominent calls for democracy. It was not a color revolution. Protests focused on local issues. Rising from the ashes, President Kassym-Jomart Tokayev promised the most substantive governance reform the country has seen since independence. Realizing the source of indignation, he declared full-fledged elections of governors. Realizing the diminution of his power, he has now walked this back. In May, government forces in Tajikistan killed more than two dozen protesters in the country’s eastern Gorno-Badakhshan autonomous region. People demanded the governor resign and an investigation into the death of a local leader in police custody. Observers noted protests focused on social issues and police lawlessness. There has been no mention of political opposition or democracy. Tajikistan languishes in devastating poverty and mismanagement.

There is no better illustration of these dynamics than Afghanistan, where for two decades the United States promoted democracy and national elections. Despite billions spent on democracy promotion, citizens never had the ability to elect a single local leader. Afghans believed deeply in democracy, but U.S. democracy promotion gave them a heavily centralized and corrupt central government that stole, cheated, pillaged, and killed. When the United States announced its withdrawal a year ago, Afghans gave up. Poor soldiers refused to fight for a corrupt government that guarded its own power and refused to allow any local discretion. If the government wasn’t going to fight for its people, why should they fight for it?

Around the world we see protests of weary residents who are asking not to be abused; not to be taken for fools. We see a desire for local self-control and freedom from corruption and shakedowns.

A foreign policy that pits democracy against authoritarianism in a Manichaean struggle does little to fix the legitimacy crisis driven by government failures.

We can take some hope from Ukraine. In the aftermath of the 2014 revolution, the Ukrainian government embarked on ambitious governance reforms. Civic leaders understood they do not have the power to root out corrupt oligarchs, but they could control who rules their communities. It embarked on radical reforms decentralizing authority. Locals now had more oversight over the public purse than at any time in history. Decentralization was accompanied by bold procurement reforms. Politicians were required to declare their assets. Mayors were empowered to govern but also constrained by local councils. In Ukraine, communities stood up to fight not just for Volodymyr Zelenskyy, but also for the mayors and city councils they elected.

The dignity deficit cannot be solved by presidential elections, but requires attention one community at a time. The most pressing foreign policy challenge is not to build democracy but to transform governance by supporting human dignity where it is born—at the local level. Democratic backsliding occurred because the democracy promotion movement plastered a thin veneer of participation onto entrenched authoritarian systems. Scant attention was paid to the machinery of government—the public administration—that is the operating system of government. But there is no easy answer for Washington—as it cannot engineer local outcomes. Communities may sometimes be less efficient than their national-level counterparts. Despite this, their fellow citizens may see them as more legitimate. That is what matters most.

Jennifer Brick Murtazashvili is the Founding Director of the Center for Governance and Markets and an Associate Professor in the Graduate School of Public and International Affairs at the University of Pittsburgh, a Nonresident Scholar at the Carnegie Endowment for International Peace, and the President of the Central Eurasian Studies Society.