A Tribute to Barry Gewen 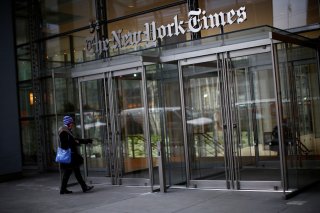 Barry Gewen, who is the author of The Inevitability of Tragedy: Henry Kissinger and His World and a regular contributor to the National Interest (TNI), has announced his retirement from the New York Times, where he began working at the Book Review in 1989. It would be difficult to think of a more distinguished run at the Times. A careful and discerning editor who is venerated by his colleagues, Gewen worked closely with Sam Tanenhaus and Pamela Paul, each of whom deftly guided the Book Review over the past several decades. He has consistently displayed sound judgment not only in his editing, but also in his own writings.

After earning a doctorate in history at Harvard, Gewen worked for Harvard scholar Daniel Bell at the Congress for Cultural Freedom, a redoubt of Cold War liberalism that was founded in 1950. Then he assumed a position at another worthy Cold War institution, the New Leader, as a regular book reviewer, where he wrote on a wide variety of topics in American and European history. His reviews were noteworthy for their clarity of style and judicious verdicts. Gewen’s talents did not go unnoticed: Mitchel “Mike” Levitas, the son of Sol Levitas, one of the original Mensheviks at the New Leader, hired him away to work at the Times.

During his lengthy tenure, he left a lasting mark. With Gewen, it was always the best of times. As Tanenhaus told me, “He was one of a small group of bona fide intellectuals at the Times and universally understood to be that. The depth of his reading, his command of ideas, and the history of the ideas. He thought about them as a scholar might but with a journalist’s feel for where the controversy lies. People often think editors simply send out books to skilled reviewers. In fact, it’s a minefield of conflicts, hidden agenda, camouflaged vendettas.” He added, “You have to have a real command of the intellectual scene. Barry knew it the way Bob Silvers or Jason Epstein or Norman Podhoretz did. He knew people’s histories as well as their resumes. All the things great editors have to have at their fingertips. For longtime writers and editors, the departure of Barry is a major loss.”

Times reporter Jennifer Schuessler, who has previously worked at the Book Review, seconds Tanenhaus’ assessment. “No one in the shop,” she recalls, “knew as much about history, foreign policy, to say nothing of the arcane of the internecine fights of the Partisan Review crowd, or the old neocons, and of course the Book Review itself. No one took more pleasure (and less umbrage) in argument and disagreement.” Schuessler confesses, “my only regret is never meeting ‘60s Barry, who claimed to have driven across North Africa in a VW Bug—presumably with a trunk stocked full of back issues of the New Leader.”

Gewen’s readiness to defy conventional wisdom and champion foreign policy realism is vividly on display in his examination of Kissinger’s life and career. It carefully sets him in the context of larger historical events to argue that he had a profound approach to foreign affairs—one that merits respect and approbation. Similarly, in his contribution to the latest issue of TNI, Gewen offers a gelidly realistic view of the current crisis in Ukraine, arguing that the “Russian invasion of Ukraine has brought home an unpalatable but clarifying truth: For all the expressions of moral outrage and the exhortations of militant rhetoric, the United States and its allies are not about to risk World War III by fighting to preserve Ukrainian independence.” But he also notes that setting red lines is a two-way street: “If the West’s leaders and diplomats are doing their jobs, they have already communicated to him [Vladimir Putin] that the West has red lines of its own.”

If I may offer a personal note, it has also been a real pleasure for me to work with Barry ever since I first began writing for him in 1993. He will surely continue to contribute to the Times and will always have a home at TNI as well.