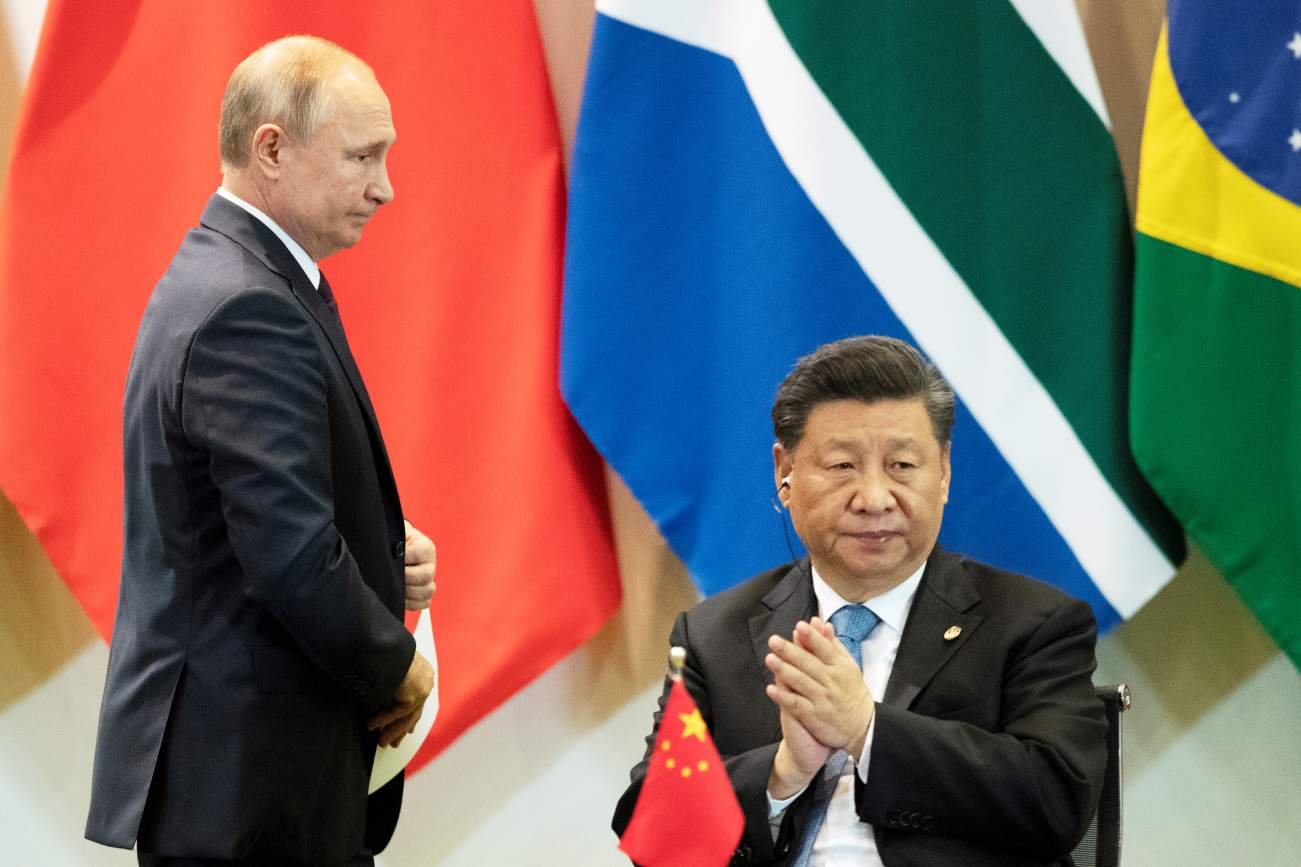 These are heady days for strategists tracking the development of Russia-China relations. Nearly every day brings a new surprise. Some are inclined to see the relationship as a mere “marriage of convenience”—fleeting in time and lacking in substance. More and more, however, this “quasi-alliance” seems quite durable and also to have legs.

Rather concrete developments in the relationship may range from the seemingly mundane, but actually ultra-critical completion of the first-ever bridge across the Amur, finally connecting the twin cities of Blagoveshensk and Heihe in the interior of Northeast Asia. But almost a thousand kilometers to the north, a Chinese-made super ice-hardened LNG tanker plies Russia’s Northern Sea Route (NSR), even in the wintertime—an unprecedented feat of engineering and navigation.

Strategists focusing on the military domain also find a rather full plate. Back in the fall, the South Korean Air Force sortied en masse and warning shots were even fired to indicate displeasure with the first-ever joint aerial patrol by Russian and Chinese strategic aviation. Tokyo was also not amused by this stunt, of course. Then, at Valdai, Russian president Vladimir Putin made the interesting announcement that Beijing and Moscow would cooperate in the critical sphere of early warning systems—a rather important tool for advanced military establishments. Now, the Russian and Chinese navies are carrying out the first-ever naval exercise with a third country: South Africa. One could dismiss the exercise as another ploy to gain attention without significant strategic meaning, but that might also be a mistake when viewed in a larger context.

Indeed, the unprecedented trilateral exercise was neither larger, nor especially complex. Beijing detached a Type 054 frigate from its 33rd escort squadron, a mission that has been continuing for more than a decade now in the Gulf of Aden. The Russian Navy was primarily represented by the cruiser Marshal Ustinov, while the South African Navy had a frigate and auxiliary participating. On the first day of the exercise, Marines drilled in boarding a merchant ship supposedly captured by pirates. Then, on the second day, according to an article in PLA Daily [解放军报], warships in the trilateral exercise “undertook such drill subjects as auxiliary gun firing at sea and cross-decking of helicopters [举行副炮对海射击、直升机互降等多个课目的演练].”

A report from the Russian press offers a bit more explanation. The author assesses: “the most developed country in Africa is of special interest to China, which aims to make [South Africa] its main reference point on the continent.” At the same time, it is likewise maintained that “Russia has significant interests with respect to South Africa, as President Vladimir Putin announced in October in Sochi at the first Russia-Africa forum, meeting with South African President Cyril Ramaphosa.” This rendering explains that the Russian cruiser had departed Murmansk back in July, made stops in both the Baltic and also the Mediterranean, and was most recently guarding “large-scale” fishing operations in the vicinity of Western Sahara and Mauritania. The Russian analysis, moreover, makes an additional observation regarding this trilateral exercise off of Cape Town: “They have a significant meaning because the exercises are . . . taking place at the confluence of the Atlantic and Indian oceans along a major global shipping route [они имеют важное прикладное значение, поскольку учения . . . проходят на стыке Атлантики и Индийского океана, где проложены важнейшие мировые судоходные пути].

Recently, I have drawn attention in this forum to China’s growing focus on the Atlantic. For the future of Chinese maritime power projection, the connection between the Indian and Atlantic oceans could indeed prove significant. The possibility that Beijing might seek a naval base in Southern or even West Africa (as they have in East Africa at Djibouti) no longer seems quite so far-fetched. Such a presence could be quite tantalizing from an economic perspective, and could also pose a completely new challenge to Western navies in their own backyard. Pretoria might even be amenable to hosting such a base (or tolerating it in neighboring Namibia or Angola), if it were showered with benefits from the Middle Kingdom, including possibly the provision of badly needed, new naval vessels and other military kits at “friendship prices.”

Moscow’s motives in southern Africa could be somewhat more mysterious. Yet, there does seem to be a trend, since the Russian Air Force dispatched a pair of strategic bombers to South Africa in a rather unique display of aerial might less than two months ago. According to one Russian report, “Now the ‘white swans’ are flying into South Africa. ‘There major goal, apparently, is a demonstration of Russian military power’ [Теперь ‘Белые лебеди’ прилетят в ЮАР. ‘Главная их цель, видимо, – демонстрация военной мощи России’],” explained one Russian general officer. That article also explains that Russia has already concluded military cooperation agreements with fifteen African governments and is in discussions with six more. Despite the ambitious first-ever Russia-Africa summit in October, the Kremlin will not seriously compete with Chinese influence in Africa any time soon, but this most recent military cooperation exercise with China and South Africa implies that Moscow is willing, at least in some degree, to accept a partnership role with Beijing, even in areas at considerable distance from Eurasia.

It has also been pointed out that this trilateral exercise could actually be the start of a trend. There are relatively strong hints that a similar trilateral exercise might be in the offing with Iran. The former Russian analysis cited above does actually cite a statement regarding such an exercise by the commander of the Iran Navy. Notably, the same Russian article seemed to imply that Moscow should be cautious about becoming more involved in Persian Gulf tensions, quoting a Russian naval expert as follows: “Against the background of the increasing complexity of Iran-U.S. relations, it is not the best neighborhood [На фоне осложнения ирано-американских отношений это не лучшее соседство].” Nevertheless, the significance for the world order of a China-Russia quasi-alliance that actively seeks partners, including some with rather confrontational stances toward the West, would undoubtedly constitute a major development for world politics. Other key middle powers, such as Turkey, could apparently be intrigued by such an alignment if current tensions between Ankara and the West deepen further.

One might logically observe the above occurrences and see a geopolitical storm about to break in the form of vastly intensified great power rivalry spanning the world from the Bering Strait all the way down to the Cape of Good Hope. At a minimum, Washington should double its aid programs for Africa and triple the funding for Stuttgart-based AFRICOM, right? Not so fast, actually.

Great power rivalry has not benefited Africa in the past. Can anyone recall the bloody civil wars that tore Southern Africa apart during the latter stages of the last Cold War? Locals have not forgotten. True, socialist-type ideologies and authoritarianism have held Africa back over the last century, but the deeper problems of development there do not lend themselves to ideologically neat answers, and pragmatism is now what is required. Moreover, let’s please all reflect on the new evidence that seems to confirm that the American CIA played a leading and notorious role in landing Nelson Mandela in a South African jail back in the early 1960s. On that note, the case of Apartheid South Africa implies that both Russia and China have a reasonably legitimate claim to have been on the “right side of history” in this corner of the world, actually. And then it seems that American strategists have already forgotten the fiasco that occurred in Niger just two years ago. They should not.

Rather, Washington should approach Africa with all due humility and resist the temptation to “cry wolf” or act like the “sky is falling” in the shadow of stepped-up Russian and Chinese activity on the continent. Multipolarity is simply the new reality of contemporary world politics. If Beijing and Moscow want to try their hands in Africa to try to solve some difficulties, whether piracy or any other, then they are free to do so and these steps need not adversely impact U.S. national security. If they make a muck of it (and they just might), then Africans themselves will rise up in righteous indignation and throw the pair of Eurasian powers out on their bums.