The True Danger of a Presidential Power Grab 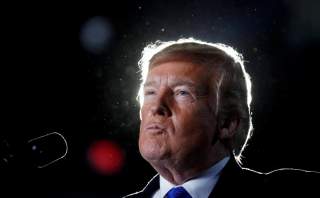 President Donald Trump’s declaration of a national emergency to fund the construction of a border wall is an affront to the democratic process and the rule of law. Presidents should not be able to pursue policies that Congress has deliberated and expressly decided against. And Trump cannot legally tell the military to divert money and man-hours toward construction projects that have no military purpose.

It will be damaging to the long-term health of the republic, therefore, if either the Congress or the judiciary does not do something to rein in Trump’s blatant power-grab. But it is not just the national emergency itself that needs to be challenged and exposed as “phony.” Americans also need to confront and put an end to the whole phenomenon of ordinary political disagreements being portrayed as extraordinary threats to national security.

Boiled down to its core, Trump’s argument is that the continued existence of unfenced expanses along the U.S.-Mexico border amounts to an existential threat to the security and perhaps even the survival of the United States. On its face, this is an obviously risible claim. But Trump’s rhetoric is deadly serious: “It’s simple. You don’t have a border, you don’t have a country.”

Can it be, though, that the president means to suggest that, unless a wall is built along the southern border, the literal existence of the United States is imperiled? Surely, the president is being intentionally hyperbolic? This may well be the case, but the language of national security isn’t confined to the president’s tweets and speeches. It’s also encoded into the very text of the proclamation to declare a national emergency and forms an integral part of its rationale.

Trump’s proclamation begins by using the language of “border security” and “humanitarian crisis” to argue that “core national security interests” are at stake along the southern border. It goes on to describe a litany of criminal justice issues—not national-security concerns—related to illegal immigration, before concluding that “it is necessary for the Armed Forces” to intervene and take responsibility for the construction of a wall.

By invoking the language of national security and designating the matter as a military affair, Trump is trying to suggest not only that Congress has been incapable of prioritizing border security—but that it would be inappropriate for the legislative branch to be left in charge of this critical issue.

The logic is simple. If the problem of the southern border constitutes a true national security emergency, then it ought to be treated in the same way as would any other urgent threat to U.S. national security. It should not be funneled through via the legislative process (slow, cumbersome, and prone to subversion by party interests) but by the executive branch acting in accordance with its prerogative powers (decisively, energetically, and with an unalloyed vision of the national interest as a lodestar).

This is not the first time that Trump has sought to paint issues as national security emergencies in order to get his way. The so-called “Muslim ban,” for example, was ordered by Trump “to protect the American people from terrorist attacks.” Trump has also justified his tariffs on foreign steel and aluminum on national security grounds, and there are even reports that the president plans to use the same powers to impose tariffs on cars and uranium.

All modern presidents have used executive powers to undertake the complex business of governing the United States, of course. Several have infringed upon Congress’s right and proper legislative role. This erosion of congressional authority (sometimes done with the connivance of Congress itself) is bad enough. But it is the insidious mixture of presidential imperiousness with the logic of national security that makes Trump’s power-grabs so dangerous.

Scholars of International Relations are familiar with these tactics and have long cautioned against their use. In the jargon of the academy, Trump is engaged in “securitization,” a concept coined by Danish political scientist Ole Wæver to describe the process whereby political actors seek to elevate contentious issues out of the realm of “normal” politics into the (higher) realm of security with the aim of acquiring extraordinary (often extra-constitutional) powers for themselves.

Sometimes, of course, public officials do need special powers to deal with security exigencies. Democracies make the difficult trade-off between national security and civil liberties on an almost constant basis. But it is also true that the process of securitization can be used to circumvent regular order for reasons of political expediency or malign intent.

Trump’s securitizing moves fall into this latter category. Few people can honestly believe that the status quo along the southern border poses an urgent and existential threat to the United States. Nor were any genuine national-security concerns remedied by Trump’s travel ban. And of course, the question of whether to place tariffs on steel, aluminum, and cars is a purely economic matter.

In each of these instances, it would have been possible to deal with existing public policy problems via the normal political process. But almost as soon as he came into office, Trump has shown a proclivity for invoking the logic of national security to annex special powers to himself and bypass the Congress. He has chosen to play the national security card because it is a convenient way to aggrandize his own power.

Indeed, Trump has admitted as much when declaring this latest national emergency. “I could do the wall over a longer period of time,” he acknowledged in the Rose Garden. “I didn’t need to [declare a national emergency], but I’d rather do it [build the wall] much faster.” In other words, Trump cynically used the specter of a national-security emergency in the name of political expediency.

This latest violation of the rule of law cannot be allowed to stand. It is vitally important that lawmakers, the news media, state and local governments, advocacy groups, and ordinary citizens stand up to oppose the president. But their efforts will be short-lived if wider lessons are not learned from this episode and others like it.

Consider Democratic Congresswoman Ilhan Omar’s recent tweets about climate change, in which she painted environmental insecurity as a true national emergency in contrast to Trump’s manufactured crisis along the southern border. Omar went so far as to call climate change “an existential threat to all life on the planet.”

Her colleague Alexandria Ocasio-Cortez has made similar comments. On one occasion, Ocasio-Cortez made an explicit argument that the United States should mobilize to fight climate change in a similar vein to how it organized to defeat the Axis Powers during World War II—that is, Americans need to reorganize their entire society and economy around the goal of “defeating” the threat posed by climate change.

The risk of using such language is that climate change is not treated as a political issue—something to be tackled via the fabric of effective government policy and consensual societal shifts in behavior—but as a national-security exigency that requires normal politics to be suspended. Wæver and other “Copenhagen School” theorists would warn us to be skeptical of such arguments.

One lesson of the Trump administration is that the language and logic of national security must be used with caution. Citizens should be skeptical when their leaders claim the need for extraordinary powers to deal with “existential threats.” Because once those coercive powers have been awarded to our elected and public officials, they can be perilously difficult to wrest away.