The True 'Pivot to Asia' Is Here 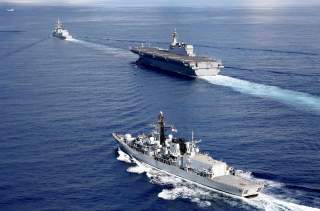 After years of ad hoc and flaccid engagement with the Indo-Pacific region, the United States is finally back, and the effects are already being felt.

For far too long, a resurgent China was allowed to create facts on the ground and at sea which challenged the regional, rules-based order that had underpinned the international system since the end of World War II. Despite the Obama administration’s talk about a “pivot” and “rebalance” to Asia, Washington was largely disengaged from a region that, during the same period, had continued to gain in importance. Unopposed but by a handful of small states, China was able in 2013 to unilaterally declare an Air Defense Identification Zone (ADIZ) in the East China Sea, and later on to “occupy” almost all of the disputed South China Sea and militarize its presence there. By the time the world finally awakened, it was too late: a new status quo had been created at sea, one which even an international court ruling had been incapable of reversing.

The meek response with which Beijing had to contend understandably led its leadership to conclude that it could seize more without encountering too much resistance. Consequently, its military exercises and intrusive passages near and around Taiwan, through the Bashi Channel and Miyako Strait, and in the West Pacific, became more frequent, and the platforms deployed more modern and muscular. Beyond the East and South China Sea, China intensified its presence in Africa and Europe, and began to make its presence more felt in parts of South Asia, as well as Central and Latin America—thus, immediately in the United States’ backyard. In several cases, Beijing used “debt trap” tactics to snare in smaller states, using debt forgiveness to acquire real estate. In some cases, Chinese interest also sparked fears of a possible dual, or military use for naval projects that were being financed—and sometimes built—by China.

At long last, the United States, without whose leadership a credible counter to Chinese expansionism will never be convincing, is recognizing the urgency of re-engagement, starting with the Asia/Indo-Pacific region, where the dislocating effects of Chinese influence are most immediately felt. This new role includes frequent freedom of navigation patrols (FONOPs) in the South China Sea, where it might be too late to reverse China’s military presence—unless the United States and regional allies are willing to chance a major armed conflict by attacking military structures built by the Chinese as part of what Adm. Harry Harris, former commander of the United States Pacific Command (PACOM), has described as a “coordinated, methodical and strategic” effort. Significantly, FONOPs have involved a number of U.S. allies, including France, the UK, Australia and Japan, which for the first time since World War II recently dispatched a submarine to the area. Even Taiwan, despite its difficult position in the international system, is now reportedly being offered a role in all this by partners which, not long ago, would never have considered taking such risks lest this anger Beijing.

In July, two U.S. Navy vessels transited the Taiwan Strait, the first such passage in a year. Recent reports indicate that the Department of Defense may be mooting further patrols in the Strait as a means to reaffirm U.S. rights to patrol international waters whenever and wherever it wants.

Passive global reactions to China’s unchecked expansionism were in some ways reminiscent of the manner in which European democracies—and a disengaged United States—dealt with Nazi Germany’s return to the Rhineland and Czechoslovakia’s Sudentenland. There was no Munich Agreement or euphoria after a summit between a Western head of state and his Chinese counterpart, à la Chamberlain, but Western democracies nevertheless had their share of appeasers in the mold of Lord Halifax (for more on this, see Ian Kershaw’s excellent book To Hell and Back: Europe, 1914–1949). This analogy is admittedly imperfect (as are all analogies), but I believe it nevertheless serves to illustrate how the inability of a group of democracies to stand up to a revisionist, authoritarian and expansionist regime can bring about a situation where a new normal is more threatening than early intervention.

As with the eve of World War II, the coalition of democracies had also convinced itself that their collective power was less formidable than that of the country (or combination of countries, if we include Italy and Japan) that sought to dismantle the system. With these things, the longer the coalition waits, the likelier it is that, at some point, the power imbalance will indeed be in the revisionist’s favor. Hitler sensed weakness then, and the result was a conflagration the likes of which the world had never seen before. Weakness in recent times has compelled a new challenger (China) to embark on similar adventurism (for all its ambitions of great power status, the Russian Federation remains at most a source of regional imbalance and very much the junior partner in the Sino-Russian axis of convenience, as Bobo Lo argues in his highly helpful new book A Wary Embrace: What the China-Russia Relationship Means for the World).

The weak responses to Russia’s territorial aggression in Georgia (2008), Crimea and other parts of Ukraine (2014), to Syria’s crossing of the red line established by former President Barack Obama and other world leaders regarding the use of chemical weapons (2013), to China’s creeping occupation of the South China Sea, sent a signal to Beijing that a collective of like-minded democracies was incapable of summoning the will to defend the global order. Early signals of isolationism by the Trump administration, Washington’s spats with various longstanding allies, and weariness among democracies following the financial crisis of 2008, also created the impression that the stars were aligned in Beijing’s favor and that it should not miss this golden opportunity.

That window is now closing, thankfully. It is important to note here as well that the United States’ decision to re-engage the region (and other parts of the world that are being overtaken by Chinese influence) is not a passing moment or solely the result of the Trump phenomenon. For years now, the mood had been changing in various Washington circles and in other capitals, where China hands began to realize that they had gotten China wrong all along.

For decades, the assumption which most influenced China policy had been that integration of China through the WTO, and a permissive attitude to its misbehavior domestically and abroad, would eventually lead to the creation of a China that was more “like us”—more palatable, somewhat liberal, if perhaps not entirely democratic. In other words, a responsible stakeholder that accepted international norms. Thanks largely to Xi Jinping, such notions have been buried, and it is very hard today to find anyone who can reasonably argue that China remains on the right track and that we, therefore, should continue to give it the space it wants. If nothing else, growing evidence that China is running a network of concentration camps in Xinjiang (euphemistically called re-education camps) and oppressing an entire ethnic/religious group within its territory and abroad should be enough to convince us that China today is more, not less, repressive and authoritarian than it was before we let it join the WTO and substantially bolstered its influence at global bodies like the United Nations.

The shift against China, in Washington and elsewhere, is therefore institutional, and consequently should be long-lasting and able to withstand changes in government.

For this rebalancing to be effective, efforts will need to be coordinated and routinized rather than ad hoc as they have been in the past. A normalized presence will make it more difficult to Beijing to claim that the United States and its allies are responsible for destabilizing the region, as it could do when a pair of U.S. Navy vessels crossed the Taiwan Strait in July. It was easy to depict the rare transits as escalatory and for the public to believe the rhetoric. A routine engagement with the region, one in which there is nothing special about such passages, fully legal under international law, will make Beijing’s alarmist claims much more difficult to make, or to believe. From now on, “red lines” set by a coalition of democracies will also need to be enforced, with the understanding that the constellation of revisionist and undemocratic regimes that are seeking to rewrite the world order are paying close attention to developments elsewhere. If we do not stand up to authoritarian expansionism in one corner of the world, other autocratic leaders and military decisionmakers in other parts of the globe will take note and are sure to exploit this perceived weakness, especially if they believe that time is not on their side.

The time has come for the world’s democracies to reclaim the world order they created in the wake of history’s most devastating war. This will require leadership, a spirit of collaboration, investment, sacrifices, and a willingness to take risks. The alternative—continued inaction—promises only worse outcomes for us all. There is no better region to start all this than the Indo-Pacific region, which is the frontline in the greatest challenge to the international liberal order since the 1930s.