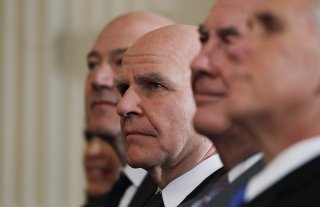 Right now, the response to the coronavirus is the top priority at the White House. Will that slow down decisionmaking on other national security issues? Not likely. The disease outbreak is just the latest in a long series of disruptions that have thus far failed to derail Trump’s global policies.

Trump has managed to pick the right national security advisor for each phase of his presidential term. This has resulted in a much more stable and productive foreign policy than the turmoil in the West Wing might suggest.

Henry Kissinger created the mythology of an all-powerful national security advisor. The position had been around since the National Security Act created the council in 1947, yet the average expert would be hard-pressed to remember anyone who held the job before Kissinger.

Kissinger was a foreign policy rock star, in part because of his unquestioned influence and high public profile, and partly for his success in dating celebrities like Diane Sawyer and Shirley MacLaine. But even at the height of his powers, Kissinger never controlled foreign and security policy. He was often played to a standstill by Nixon’s cunning Secretary of Defense Melvin Laird. And of course, later, while serving as Secretary of State, he couldn’t save the Gerald Ford presidency.

Jimmy Carter entered office determined to never have a Kissinger-like National Security Council. He didn’t. Still, he managed one of the most inept foreign policies of the modern era.

While Carter only had one national security advisor, Ronald Reagan went through several. Yet that wound up producing a much better foreign policy—despite the calamity of the Iran-Contra Scandal.

Advisors are just one factor in determining the course of a presidency. But they are an important factor. Richard Allen, for example, deserves a lot of credit for putting a structure to Reagan’s policy of competing with the Soviet Union.

As of today, Trump has cycled through four advisors. An article in Foreign Policy describes that cycle as chaos but a high turnover rate does not necessarily equate to low performance.

In retrospect, Trump’s national security policy has been far more consistent in direction and discipline than his critics would have you believe. Through thick and thin, it has largely stuck to the game plan mapped out in his National Security Strategy.

Surely Trump did not plan on changing his advisors like t-shirts but the shifts have served only to strengthen the president’s grasp on policy.

Michael Flynn’s appointment, though short-lived, was impactful. Trump told Washington that he intended to make good on his campaign promise that U.S. foreign policy would not be business as usual.

In her excellent new book, Revolution: Trump, Washington and ‘We The People,’ former Deputy Advisor K. T. McFarland recalls that one of the first events she participated in was “Passing the Baton.” Sponsored by the U.S. Institute of Peace, the event brought together the incoming and outgoing council staff, as well as policy experts from Washington’s left and right.

What really stood out, she writes, was the “disdain” the old guard showed for the new. Clearly, the old guard was getting the message. It was a season of change.

While Flynn’s tenure was shorter than an Indian summer, he set the tone: Trump was going to be the disrupter-in-chief.

Still, there was an open question: disruption to what end?

Enter H. R. McMaster. There was every reason to believe the West Point trained McMaster would be a good fit for Trump. McMaster and his cerebral deputy, Nadia Schadlow, delivered what the president needed most: structure for his policy goals, in the manner of Allen translating Reagan’s soaring rhetoric into a blueprint for winning the Cold War.

The National Security Strategy crafted under McMaster explained what “America First” really meant. He didn’t write Trump’s strategy. Trump did.  But McMaster turned Trump’s ideas into an action plan that the government could carry out.

McMaster, however, has to be credited with showing the world that “America First” meant anything but America alone. The value of McMaster’s counsel is reflected in part by the fact that the president still consults him.

McMaster’s replacement was John Bolton. That’s when Washington learned Trump was not just the disrupter-in-chief but the decider-on-chief as well. At the outset, some argued that McMaster, along with Defense Secretary Jim Mattis, Secretary of State Rex Tillerson and Chief of Staff John Kelly served as an “axis of adults” to check the president. Nothing could be further from the truth.

Some of the president’s advisors have said their greatest contribution was being able to talk the president out of committing certain actions. That sounds impressive. What’s missing is the acknowledgment that they worked for a president who listened to sound advice—and took it when he heard it.

Trump from the beginning wanted to shake things up to get better results from American policies. Yet he balanced that impulse with a determination to reduce—not increase—the risks to Americans and their interests.

Bolton was the perfect fit for this phase of Trump’s presidency. Bolton’s “take no prisoners” approach to foreign policy reinforced the president’s determination to demonstrate to America’s great-power competitors that he was serious about pushing back and willing to use the country’s power to safeguard its interests.

But Trump’s policies were not Bolton’s policies. In the end, this partnership didn’t endure. While Bolton is an offensive realist, Trump is more circumspect, balancing threats of force and pressure with offers to negotiate and compromise. Nevertheless, under Bolton’s successful tenure everyone got the message. Trump was no paper tiger.

It is not surprising that Bolton’s departure had little impact on Trump’s foreign policy. It was always Trump’s policy.

Enter Robert O’Brien, a disciplined, responsible national security professional who understands Trump’s priorities and will faithfully execute them. In many ways, O’Brien has benefited from his predecessors’ work and experience. Not only has he inherited a fully-formed agenda, but he has also seen what works and what doesn’t in the council staff. He has worked to right-size the staff. He continues the effort to push operational responsibilities back to the agencies where they belong. He has put the staff on course to play its proper role as a policy-coordinating body with one purpose: to support the president.

With the advent of the coronavirus, critics have lambasted the president for the dismantling of the national security’s pandemic response office in 2018. This completely misses the point that the limited policy coordinating function of that office was never central to the pandemic response, which is directed by a national response plan. Council staff never had any operational responsibility nor oversight of public health policy—nor should it. O’Brien’s folks are focused on doing their job—not other people’s.

There is no question that Trump’s national security council followed a rocky road. Still, the journey led to where Trump wanted it to go. Today, America’s foreign policy is in far better shape than critics would acknowledge. In his own way, each advisor contributed to that success.