Trump Could Make an FDR-Style Grand Bargain with Russia 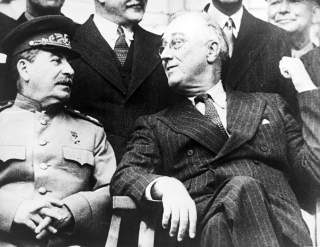 Many have been critical of President Donald J. Trump's desire to cooperate with Russia. Yet, more than half a century ago, Franklin D. Roosevelt behaved in a similar manner towards Moscow and experienced similar forces.

The criticism towards both American presidents has been a natural response from the establishment in Washington, considering that since 1917, the behavior of the United States has been influenced by Woodrow Wilson’s idealism. Even Richard Nixon, the Cold War president who came closest to focusing on strategic interests, would recur to idealism from time to time, a seemingly inescapable part of “American nature.”

Henry Kissinger has written that the United States was raised in a faith system of good versus evil. Concrete examples are found in Truman’s administration, when it demonstrated that NATO was not a traditional alliance, because the United States was defending principles and not territories. With this, the old concept of the balance of power was reborn with American idealism.

Another concrete example is the participation of Washington, DC in the diverse conflicts of the twentieth century. The justification for U.S. involvement was based not on strategic measures, but on a moral obligation to oppose injustice and oppression. As a result, the United States has intervened in wars where the value extracted from fighting in them has been minimal.

1917 was a crucial date in the relationship between the United States and Russia. In that year, the Bolsheviks would inaugurate a new type of government and society, seeking to displace the capitalist, liberal and bourgeois model that predominated in the world. Capitalist powers like the United States feared this possibility and did not recognize the new government in Russia, while aiding anti-Bolshevik forces.

The following year, Woodrow Wilson outlined his Fourteen Points, which sought to create a world based on international cooperation, collective security, open markets and self-determination. The last concept was the most significant, as it implied that democracy would accompany this global transformation.

Both events caused a “clash of civilizations,” making it impossible for Russia to fit in, until 1933, when FDR decided to deviate from Wilson’s foreign policy. By the time of the Second World War, Roosevelt was one of the few American officials who understood that the Soviet Army could contain both Germany and Japan.

When Roosevelt became president in 1933, it was obvious that American policy towards Russia had been a failure. Not only did it not change its internal structure, but it was not able to dissuade the Soviets from carrying out anticapitalist activities abroad. Yet, perhaps more importantly, the United States was unable to take advantage of the expansion of the Soviet economic market.

The Soviets also appreciated the strategic potential of the United States. Soon after FDR became president, they started a correction course to abandon their isolationist policies. They sought to create a system of collective security that would contain both Japan and Germany. In 1934, the Soviet Union entered the League of Nations, and the following year it formed alliances with France.

Yet the Soviets knew that it was the United States that had the potential to stop the ambitions of Japan and Germany. Indeed, on October 10, 1933, they accepted an invitation from Roosevelt to restore relations, and Maksim Litvinov, the Soviet commissar of foreign affairs, traveled to Washington.

But officials in the State and War Departments were suspicious of the Soviets, and sought to resist FDR’s policies with Russia. Many officials opposed the diplomatic recognition of the Soviet Union, as well as military aid, but most importantly the plan to include them as a partner in the postwar world. These officials believed that the United States should obtain concessions from Moscow in return for aid. Roosevelt believed instead that the only condition for military aid should be that the Soviet Union continue fighting against Nazi Germany.

Fortunately, FDR was not persuaded or outmaneuvered by the officials who disagreed with him. Research from Albert Weeks has shown that the Lend-Lease program allowed the Red Army achieve victory against Nazi Germany, and therefore prevented the prolongation of the war and Germany’s development of weapons of mass destruction.

Some of these officials also waged dirty “wars” against FDR’s supporters, like when military attaché Joseph Michela had authorities investigate Col. Philip Faymonville for a “morals charge,” back then code for homosexuality.

While the New Deal needs to be taken into account when considering the criticism, FDR faced considerable opposition from Congress for his Russia policies, and in 1940, he told Rep. Martin Dies, “I do not regard the Communists as any present or future threat to our country. In fact, I look upon Russia as our strongest ally in the years to come. As I told you when you began your investigation, you should confine yourself to Nazis and Fascists.”

In July of 1935, Rep. Robert Rich of Pennsylvania declared, “Roosevelt is a socialist, not a Democrat.”

Similarly, Trump has faced considerable opposition from the Democratic Party and certain GOP members, who have implored him not to break with Washington's policy towards Moscow. Some of these political entrepreneurs funded the collection of a dossier with largely uncorroborated allegations, which gives the impression that they feel Trump is at best a compromised fool and an agent of Russian influence or at worst a Russian agent and a traitor.

Trump has been attacked by certain commentators in the press, for praising Putin (as FDR had praised Stalin as a “great leader”). He has been chastised by those pundits for his desire to cooperate with what they perceive to be an authoritarian leader and a country whose values clash with the United States, undeserving of the trust or the help of this country.

And yet all those opponents claim to have the moral high ground while they ironically call for stronger relations with Saudi Arabia, or lack the courage to criticize it—a country that is the epitome of oppression and spreads extremist ideology throughout the world.

FDR also faced considerable opposition from civil society. Organizations like the American Liberty League were created to show that communism was a larger threat than Nazi Germany. They were supported by important figures and celebrities like New York governor Al Smith and aviator Charles Lindbergh.

But Roosevelt's desire for cooperation with Russia did not originate in ignorance or naïveté, but rather in the benefits he believed it would yield for both countries. Indeed, Walter Lippmann has said that Roosevelt was too cynical to believe he would be able to somehow charm Stalin.

On the other hand, Mary E. Glantz argues that those officials who opposed FDR allowed their ideological bias to affect their judgment. In fact, as Glantz has proved, military intelligence was distorted by American officials to predict that the Soviets would not be able to confront the German invasion of 1941 and that therefore giving them military aid would be a waste of resources.

Interestingly enough, political scientist Graham T. Allison has written that the main obstacle presidents must overcome is bureaucratic politics. An intelligent man, Roosevelt tried to maneuver around his critics and, instead of dealing with Joseph Stalin through the American ambassador in Moscow, he engaged him through personal diplomacy or through trusted advisers like Harry Hopkins. Then in 1937, due to anti-Russian bias, the Eastern European Affairs division at the State Department was merged with the Western European Affairs division, becoming the Division of European Affairs. The longtime Soviet specialist Robert Kelley was ordered away to Ankara.

In a similar turn of events, State Department veteran Patrick Kennedy, along with other bureaucratic high officials, were forced to resign in the early days of the Trump administration. It is no secret that many officials of the higher echelons of the State Department and the Central Intelligence Agency strongly disagree with Russia’s actions in Syria and the prospect of an alliance with Moscow.

FDR waged foreign policy in a manner unique for American political history. While he was influenced by Henry Stimson or Harry Hopkins, he was usually quite secretive with his plans. Similarly, Trump prefers to rely on a small council of trusted advisors, including Steve Bannon, Jared Kushner and perhaps Mike Flynn. Trump decided to restructure his National Security Council, and sidelined two intelligence officials in favor of Bannon. Whether Trump’s secretive approach will work like it did for FDR remains to be seen, but what is sure is that Bannon is no “true leader of men,” as Winston Churchill called Harry Hopkins, chief diplomatic advisor to FDR.

Trump, like Roosevelt, understands that alienating a country as the Obama administration tried to do with Russia simply does not yield positive results. All the sanctions imposed against Russia have not stopped it from engaging in Syria, Crimea or eastern Ukraine.

Like Roosevelt, Trump also understands that Russia can be a great military partner against grave threats that disturb world peace. While Nazi Germany does not exist anymore, the most conventional threat is North Korea, and Moscow can help there through its influence on the Chinese; the most important unconventional threat is terrorism, primarily stemming from both Iraq and Syria, where Russia actively engages against radical groups.