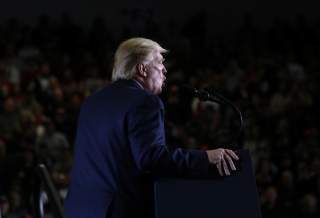 WRITING ABOUT any president prior to the end of his (there has yet to be a “her”) administration is never an easy task. To write anything substantive about Donald Trump, as opposed to “tell-all” exposés that reveal his chaotic managerial style, his public and private feuds, and the corruption that seems to permeate the White House and has brought down several of his cabinet officers, is an even greater challenge for the serious analyst. In just eleven months beginning in January 2019, Trump, perhaps the most transactional, impulsive, and inconsistent human being ever to reside in the White House:

replaced two secretaries of defense, one of whom, an acting secretary, he had nominated for the permanent position;

replaced his director of national intelligence;

replaced his secretary of homeland security;

walked out of a summit with North Korea’s Kim Jong-un;

abruptly canceled peace talks with the Taliban—undermining his own negotiator—after nearly a year of negotiations and the drafting of an agreement in principle that was ready for signature;

became the subject of impeachment proceedings.

Colin Dueck completed his manuscript before any of the foregoing occurred. That events have moved on since then demonstrates the danger of writing about current history. It is one thing for a journalist to attempt to do so, but quite another for a respected and thoughtful academic like Dueck. His short volume, Age of Iron: On Conservative Nationalism, constitutes a valiant attempt to make sense of Trump’s trade, immigration, security, and foreign policies by placing them in the context of a century of Republican and conservative thinking. Ultimately, he fails because it is simply impossible to place Trump in any serious, carefully thought-out, consistent policy context.

Dueck argues that Trump is at bottom a conservative nationalist, and for that reason, the president reflects what he terms “the oldest U.S. foreign policy tradition in existence.” Moreover, as he postulates on the very first page of his book, conservative nationalism is “neither fascistic nor undemocratic”—the critique that former Secretary of State Madeleine Albright and others have leveled at Trump and his policies. “Nor,” he goes on to say, “is a conservative US nationalism historically incompatible with American engagement overseas, including the promotion and defense of democracy,” although the latter is not a Trump priority. Instead, what Dueck terms “foreign policy frustrations” since 9/11 have led to a particular form of conservative nationalism that Trump may represent, but that will surely outlast him.

THERE IS considerable merit in Dueck’s observations regarding conservative nationalism. Dueck rightly states that American nationalism harks back to the founding of the republic. It is akin to what he terms European “defensive conservative nationalism,” which prioritizes “adherence to the European state system, political realism, and concepts of nationality against progressive forms of supranational governance.”

He is on less solid ground when he asserts that such a posture relates to Europe’s affairs as it has characterized the foreign policies of statesmen ranging from George Canning and Benjamin Disraeli to Margaret Thatcher and Charles de Gaulle.

Nineteenth-century Britain confronted a very different Europe, however—one that was fundamentally at peace ever since the Congress of Vienna. On the other hand, Europe in the age of de Gaulle and Thatcher was still reeling from two world wars that had ravaged the continent. It was in the aftermath of World War II that six European states, notably France and Germany, took the first halting steps toward what ultimately became the European Union. Because they recognized the importance of reconciling Western Europe’s two most powerful rivals, both de Gaulle and Thatcher accepted a degree of European supranationalism, though they did not support steps that might someday lead to a united, federal Europe. Most notably, neither ever contemplated breaking away from the European Union (or the European Economic Community, as it was termed in de Gaulle’s day). Their policies were a far cry from that of current Prime Minister Boris Johnson, whose determination to lead Britain out of Europe received Trump’s full-throated support and encouragement.

According to Dueck, the American version of conservative nationalism comprises three distinct groups: internationalists, non-interventionists, and hardliners. Conservative internationalists support an active American role overseas, including foreign aid, forward military deployments, alliances, and military commitments. Non-interventionists resist military intervention and commitments of all kinds. Conservative hardliners support high levels of defense spending and overpowering military reaction to direct threats to the United States but shy away from foreign engagements and military interventions. One is tempted to describe these three tendencies as respectively the neocon approach, the Steve Bannon (or Cato Institute) approach, and the John Bolton approach. Given Trump’s record of rejecting proponents of each of these approaches—he hired virtually no neocons and he dismissed both Bannon and Bolton—it is not clear where exactly the president fits in.

Dueck tries to shoehorn these three approaches into the conservative reaction to Woodrow Wilson’s dogged and uncompromising determination to have the United States join the League of Nations. He describes Senators Henry Cabot Lodge and his northeastern Republican colleagues as internationalists; Robert La Follette and his followers as non-interventionists; and William Borah and his supporters as nationalist hardliners. To some extent, Dueck’s categories apply both to the conservatives of 1920 and those of one hundred years later.

To buttress his assertions about the nature of conservative nationalism, Dueck offers an exceedingly cursory sixty-six-page overview of American foreign policy—beginning with Theodore Roosevelt’s policies through those of Barack Obama—that is often so short on detail that only a foreign policy expert or a Washington insider can grasp what he writes. In contrast to his review of a century of American foreign and security policy, Dueck devotes nearly thirty pages to Donald Trump’s first two years in office. His clear objective is to place Trump within the mainstream of conservative American foreign policy. Yet all along the way, his observations about presidential policies demonstrate how different Trump’s response to foreign developments—it is too much to call it a policy—is from those of his predecessors, however successful or unsuccessful they might have been.

TRUMP IS certainly no Teddy Roosevelt. As Dueck points out, Roosevelt’s guiding principle was “don’t bluster, don’t flourish your revolver, and never draw unless you intend to shoot.” As his relations with Kim Jong-un amply demonstrate, Trump’s approach is the polar opposite. He is full of bluster. He threatens those who might challenge him. Then he backs down. Trump has ordered the cancellation of two major American military exercises with North Korea; Kim, on the other hand, has resumed long-range ballistic missile testing.

Dueck’s review of the Republican interwar administrations does point to some parallels with Trump, though they are not exactly ones that paint him in a positive light. He notes that during the 1920s, Republicans supported high tariffs, as does Donald Trump today. Of course, the consequences of those tariffs, given the huge debts that complicated the economies of both the victors and losers of World War I, contributed directly to the rise of Nazi Germany and World War II.

During the 1920s, Republican administrations called upon private citizens to act as proxy diplomats in the realm of foreign economic policy; Trump has done the same. Yet in contrast to the successful efforts of the banker Charles Dawes and the businessman Owen Young in renegotiating and reducing Germany’s debt, there is little positive that can be said about the work of Trump’s leading unofficial diplomat, Rudy Giuliani. Unlike the work of those unofficial diplomats of the 1920s, whose objective was to stabilize the international economy, Giuliani’s involvement in Ukrainian affairs has destabilized America’s foreign relations and was the proximate cause of the Democrats’ efforts to impeach and remove the president.

After providing an overview of Roosevelt and Truman’s foreign and security policies—which for the most part won the support of conservative Republicans, with the notable exception of Senator Robert Taft, who preferred what is currently termed “offshore balancing” over alliance commitments—Dueck turns to Dwight Eisenhower, the Republican president whose national security policies he appears to most admire.

Eisenhower supported both NATO and stationing American forces in Europe but did not intend for those forces to remain in Europe indefinitely. He signed formal defense treaties with a slew of Asian countries; led America into another multinational organization, the Southeast Asia Treaty Organization; and supported the creation of another, the Central Treaty Organization, better known as the Baghdad Pact. Dueck notes that Eisenhower was able to convince most conservative Republican nationalists to support his generally internationalist approach. He also succeeded in leading what Dueck rightly terms “an historic change in GOP priorities on trade and foreign assistance.” He concludes his review of Eisenhower’s policies with a wholehearted endorsement:

[Eisenhower was] highly diligent, calculating, and commanding behind the scenes … he was a fierce anti-Communist … [yet] at the same time he looked for peaceful outcomes, was genuinely open to diplomacy, did not believe the American model easy to export, was skeptical of preventive warfare, and understood from personal experience how quickly military entanglement could spin out of control. Precisely by respecting the limits of conservative nationalism, he internationalized the Republican Party.