Trump Flirts with “Read My Lips” Moment with China Deal 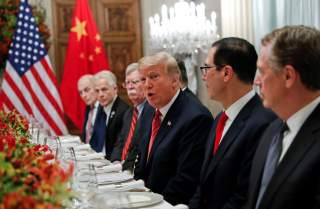 After dinner with Chinese leader Xi Jinping on the sidelines of the G20 summit, President Trump announced a breakthrough on trade with Beijing. He boasted: “China will be opening up. China will be getting rid of tariffs,” adding, “It’s an incredible deal… if it happens, it goes down as one of the largest deals ever made.”

But that isn’t the conclusion Beijing will reach, where the agreement will be seen as an adept move to forestall U.S. tariffs and run out the clock on Trump’s presidency, which Beijing expects to last one term—a near certainty if Trump caves on this, his signature foreign issue.

The administration claims that China has agreed to a major but unspecified purchase of U.S. exports. Beijing also agreed to outlaw fentanyl, an export from China that has helped fuel spiraling U.S. opiate addiction and related deaths. And the two parties agreed to another ill-defined dialogue on trade that will “endeavor” to wrap up its work in ninety days.

In exchange for this aspirational list, America has agreed to postpone tariffs on $200 billion of Chinese imports that were scheduled to increase from 10 percent to 25 percent in January. Gone also is talk about applying higher levies to the other half of Chinese imports still untouched.

Keeping tariffs at 10 percent is about the same as keeping them at zero. China had devalued its currency 8 percent against the greenback in just six months, meaning affected goods really only cost 2 percent more. Chinese exporters to America are mostly no worse off.

The promise to purchase American goods is also a tired if reliable Chinese trick. It’s easy and routine for a Chinese leader to consolidate a bundle of imports into a single package—especially ones that were going to be purchased anyway—and present them grandly to visiting foreign leaders.

The Chinese tried this very move with Trump last spring, combining an offer to buy more U.S. goods with a vague framework for reform. This led Treasury Secretary Steven Mnuchin to declare on TV: “We are putting the trade war on hold. Right now, we have agreed to put the tariffs on hold while we try to execute the framework.” But Trump reportedly saw the maneuver for what it was and ordered higher tariffs to proceed. What’s different now?

The most glaring omission from the deal is any serious signal from Beijing that it will begin respecting foreign intellectual property and stop forcing American companies doing business in China to give up their technology. This gripe isn’t just one of many problems Trump identified with China’s conduct; it has been the most fundamental and enduring complaint and the key justification for higher tariffs under U.S. trade law. It is also a concern shared by Europe, Japan, Taiwan, and other high-tech economies that trade with China, as well as a major factor in Beijing’s alarming military modernization.

As for the promised dialogue, you can be forgiven for a sense of déjà vu. At the beginning of his presidency, Trump welcomed Xi to a summit at Mar-a-Lago where the two agreed to create a “United States-China Comprehensive Dialogue” promising “an ambitious agenda and meeting schedule to show progress and demonstrate meaningful results.” Of the four pillars of the agreement, one was committed to trade. That was the last time anyone heard about the dialogue.

Moreover, the deal in Buenos Aires comes with another cost: it undercuts U.S.-led efforts to contain China, especially Beijing’s military and economic expansionism throughout the Indo-Pacific. A fundamental part of pushback was Vice President Pence’s hawkish speech about China at the Hudson Institute in October. Virtually every diplomat and journalist from the region with whom I spoke after the speech asked if it marked a real turning point for America or was merely a one-off tactical gesture. It now looks more like the latter.

Indeed, aside from the Pence speech, Trump’s administration has failed to articulate and begin enacting a lasting policy toward China that average Americans and U.S. allies can understand—an important step if Washington wants them to stick their necks out too. Trump himself has made clear he sees Beijing’s military and economic moves as threatening, but his administration’s follow-through has been amateur. Trump won a much higher military budget from Congress, but this has yet to manifest itself in any real force posture increase in the Pacific. The movement of a sophisticated missile defense system to South Korea remains the only military move that got China’s attention, and that was initiated by the Obama administration. Meanwhile, Trump’s Treasury Department and National Economic Council are widely viewed as opposed to his trade agenda, advocating instead for Wall Street’s interests.

In fact, the constituency that will be most pleased with the outcome of the G20 will not be those counting on Trump to fulfill a promise to restore U.S. manufacturing, but Wall Street. Will those who have profited from China’s rise and given overwhelmingly to Trump’s progressive opponents now help him get reelected? While the G20 outcome is not akin to George H.W. Bush’s disastrous breaking of his “read my lips” pledge not to raise taxes, a Trump cave-in on trade after this ninety-day period of negotiation would be just that.

G-20: It’s ‘Now or Never’ in the ‘Fight of the Century’ Between Donald Trump and Xi Jinping