Trump Must Be Stopped 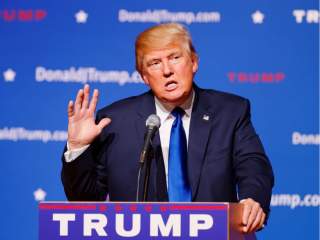 Donald Trump offered viewers a preview of the latest House of Cards season, which began on March 4, throughout the course of the Republican presidential debate that took place the night before. Trump is the closest real-life approximation of Frank Underwood, the scheming, self-absorbed politician who prevaricates to the point of it being second nature to him, and who puts himself and his sordid interests above those of his country. And like Underwood, Trump has been pulling the wool over the eyes of Republican voters (Underwood is a Democrat) throughout the current election campaign, telling them whatever it is they want to hear and avoiding specifics as much as he can. But unlike even Underwood, Trump also is ever ready to stoop as low as he feels necessary in order to besmirch his competitors rudely, crudely and publicly. Underwood at least is a back-stabber.

Trump feels no compunction about the shenanigans that have surrounded his eponymous so-called university. He argues that the lawsuits against him will be dealt with in a few years’ time. Yet he hopes to be president in a few years’ time. Does he intend to continue to fight the lawsuits while he is president? Will he order government agencies such as the FBI or the IRS to intimidate plaintiffs and witnesses?

His statements regarding the torture of captured terrorists would indicate that he indeed would use any means to block the lawsuits against him. He has made it clear that he is quite prepared to order the military to torture captive terrorists, despite the fact that such an order would be illegal. In fact, he asserted during the March 3 debate that the military would follow his orders, thereby disregarding the provisions of the Uniform Code of Military Justice which forbids troops from carrying out an illegal order such as a command to torture prisoners. Will he therefore have an enemies list, which would include anyone who attempts to fight him in court, and against whom he would do whatever it takes to prevail, legal or illegal?

Trump continues publicly to insist that he will build a wall on the Mexican border and force the Mexican government to pay for it. He has not explained how he will actually get the Mexicans to do his bidding, especially as both the current and former presidents of that country have made it clear that they have no intention of doing anything Mr. Trump demands. But then, perhaps he is not serious about the wall. That appears to be the gist of his still off-the-record comments to the New York Times. In truth, it matters little whether Trump acknowledges that he is simply mouthing what some voters wish to hear, and has no intention of building a wall, or indeed is serious and plans to do so. In either case, his credibility is nonexistent: either he has been lying to the electorate, or he has no sense of international relations, because he will never be able to build a wall. He will, however, further alienate a Mexican leadership whose cooperation is critical to stanching the flow of both drugs and immigrants across America’s southern border.

I was among a group of Republican former national security officials who signed an open letter pointing out the danger of electing Donald Trump as president of the United States. Even before coming even close to obtaining sufficient delegates for the Republican nomination, he has become anathema to American friends and allies throughout the world. His questioning of America’s alliances, and his acceptance of Vladimir Putin’s effusive endorsement has alienated America’s NATO partners, with the possible exception of the quasi-fascist Hungarian leader Viktor Orban, who himself is too close to Putin for the comfort of many in the West. Trump’s proposal to block all Muslims from entering the United States not only smacks of racism—much like his hesitant disavowal of David Duke’s endorsement—but also has infuriated America’s Arab and Muslim friends in the Middle East and Southeast Asia. His remarks about Jews and Israel have caused that country to wonder how it would fare in a Trump presidency. His opposition to free trade, and his Korea- and Japan-bashing have provided ammunition to those in both countries who would prefer to loosen the bonds that tie them to Washington. His statements about forcing trade concessions from China are only aggravating the tensions that have engulfed the South China Sea. And of course, his attitude toward Hispanic immigrants not only has alienated Mexico, but has infuriated all of our Latin American allies.

Not everyone who opposes Trump, or who signed the national security letter, is a neocon. I am not the lone realist among the group who had reservations about the Iraq War. And if anyone is a warmonger, it is Trump himself. His policies could well lead to war, perhaps because Putin will conclude that he is free to attack a NATO ally, or because Kim Jong-un of North Korea will choose to attack Seoul before it goes nuclear as a result of its ruptured relationship with the United States.

But then perhaps Trump doesn’t care what happens in Europe or Asia. He may be content to let NATO collapse, or let the south be destroyed by North Korea. His reaction is anyone’s guess. But it is precisely for this reason that this man should be stopped, before he does even more damage to American national security than he has already managed to do in the course of his all-too-frightening quest for the presidency of the United States.