Trump Is Only Guilty of Being Trump 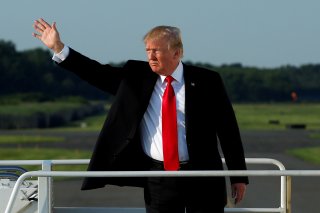 Everything that has come out about Donald Trump and Russia in the past week has been exculpatory of the president. But you wouldn’t know it from the way the news has been reported and “analyzed” to fit a preconceived narrative of Trump as Richard Nixon ensnared in a new Watergate.

What the much-hyped developments of the last few days have shown is that Robert Mueller is acting true to type as a political prosecutor, nailing anyone he can with whatever tangential charges he can get to stick, in hopes of striking lucky and finding someone high up in the Trump chain of command who made similar missteps. Mueller doesn’t have to show a shred of evidence to support the story that Trump colluded with Putin to subvert last year’s election. All Mueller has to do is get convictions, any which way he can. Trump’s enemies in the pundit class will do the rest.

So Michael Flynn has entered a guilty plea—not for collusion or treason or any substantial crime, but for lying to investigators. He gave them a false account of the timing and circumstances of his talks to Sergey Kislyak, then the Russian ambassador to the U.S., during the presidential transition. That Flynn was lying about the subject was already public knowledge: he lied to Vice President Pence about it, which was what led to Flynn’s forced resignation as national security adviser.

Lying about contacts with a Russian official certainly seems like it fits the story that Trump’s people were up to no good with the Kremlin though, doesn’t it? No—or rather, only if you don’t pay any attention to the details. There is no clear criminal case against transition officials for talking to diplomats from any country: what else is to be expected from the foreign-policy transition between administrations? In the two months between an election and a new president’s inauguration, the world continues to turn, and policies have to be set with the future in mind.

Flynn contacted Kislyak at Jared Kushner’s behest to ask that Russia vote against a United Nations resolution to condemn Israel for building settlements. Anyone who knows the first thing about Israel, Russia, U.S. politics, or the United Nations knows this is utterly unexceptional. The Russians, predictably, declined the request—which certainly doesn’t suggest that Moscow and the new administration had any kind of special understanding. Flynn subsequently contacted Kislyak to ask that Russia not retaliate for steps the Obama administration was taking against Russian diplomats and diplomatic property in the United States. Such a request, which the Russians complied with, seems entirely in keeping with American national interests. An administration that wanted to put Russia’s interests over America’s would have done the very opposite, letting U.S. diplomats suffer for Obama’s actions.

Why did Flynn lie? In politics, people lie because they are loyal. This is one of the dirty secrets—or rather, just bland realities—of the way the world works. In theory, all government officials directly serve the public. In practice, every leader has to rely on his subordinates not to contradict him or otherwise put him in an awkward position. Flynn lied to keep his superiors, notably Kushner, from being drawn into controversy. And I doubt he needed to be ordered to do so—a good soldier knows when to take initiative.

But Flynn botched it, making a much bigger mess for himself and the administration because now, instead of the issue being a political problem of explaining legal and appropriate contacts with a Russian, the issue is lying to investigators, which is a crime. Flynn’s lie didn’t help the administration politically, either, because someone leaked to the press word that Flynn’s conversations with Kislyak had been intercepted by U.S. signals intelligence. That leak—of extraordinary political consequence—is a curious thing, a deliberate betrayal of government secrecy to harm an incoming president. Why isn’t that a story?

The manipulation of public perceptions by anonymous sources came with serious consequences for ABC News’ Brian Ross this weekend. Ross has been suspended for four weeks without pay for promoting the falsehood that Trump himself directed Flynn to contact the Russians during the 2016 campaign. A figure described only as a Flynn “confidant” made this claim to Ross in an attempt to analyze—or perhaps spin—the breaking news about Flynn’s guilty pleas and decision to cooperate with Mueller. The “confidant” later “clarified” that in fact Trump had only asked Flynn “to be one of a small group of close advisors charged with improving relations in Russia and other hot spots.”

(Note that “and other hot spots” by the way—was this “small group of advisors” actually focused on Russia at all? Why is an anonymous “confidant” allowed to make these vague and seemingly unverified claims? What compelling news interest calls for licensing gossip by unnamed sources? It’s not hard to figure out why the sources is anonymous, of course: he or she is betraying a trust about the workings of a campaign, yet is not willingly to do so publicly and may still be in a position of trust with Flynn or the Trump administration. Is someone who betrays these trusts, however, really to be trusted to play straight with the public? Shouldn’t the public get some hint as to what motives, especially political ones, lead these kinds of sources to do what they do?)

ABC News’ claim that Trump hard directly ordered Flynn to talk to Moscow during the election was sensational and made news of Flynn’s cooperation with Mueller far more powerful than it otherwise would have been. And even after issuing a retraction—euphemistically styled as a “clarification” or “correction”—ABC News continues to hype the whole Flynn story as a “stunning turn.” How can it be “stunning” that Flynn pleads guilty to a minor crime that anyone could have guessed he committed? Or when his testimony only shows that the Trump transition team engaged in rather ordinary and perfectly legal contacts with foreign governments in the weeks before the inauguration? ABC’s editorializing here, no less than its failure of editorial oversight in letting Ross make a false claim, indicates something deeply wrong with coverage of the Trump-Russia story. Not only a narrative but a set of sensational emotional “cues” has been set up with predetermined results in mind. Every predictable turn in the story is going to be “stunning” because it advances the narrative.

And the next turn is very predictable indeed: Jared Kushner or other figures more important than Flynn will be caught having been sloppy in what they said to investigators, and then they will be the next heads displayed on Mueller’s pike. Kushner is in real danger here, given his inattentiveness to filling out security forms. The entire Trump operation, campaign and transition alike, was not known for extreme punctiliousness in observing proper bureaucratic protocol. Mueller is going to find other mistakes, things that have nothing to do with betraying U.S. interests to Moscow, but that serve to generate headlines and justify political hype. Mueller is not unusual in this: there is a standard script here familiar to anyone who has watched how prosecutors get headlines by going after prominent business figures and politicians over trivial infractions. It’s the target of the investigation, not the crime, that matters in a good witch hunt. Once you have the verdict, you can find the crime.

The mix of editorializing hype, fake news, and real if unsurprising developments surrounding Flynn has created conditions for even more Left-McCarthyism, though the facts that come out in any number of ancillary stories continue to suggest that Russia had no reliable lines of contact with anyone in Trump’s orbit during the campaign. Russians claiming—or disclaiming—various degrees of connection to Putin talked to conservative activists and policy-wonk wannabes, who in turn contacted the Trump campaign to offer back channels to Moscow. The campaign rebuffed most such entreaties, though Donald Trump Jr. and other key persons took an ill-advised meeting with one Russian who claimed to have “dirt” on Hillary Clinton. The awkwardness of these contacts, all which seem like desperate Match.com overtures, undercut the fantasy that Trump had somehow been “turned” by Russia years before through business dealings or FSB “Kompromat” involving incontinent hookers.

Neither Flynn nor any other Trump official has so far been shown to have been in contact with Moscow during the campaign. The election was over by the time Flynn spoke to Kislyak, about matters that were legitimate business for an incoming administration. That Flynn lied to the FBI is unsurprising in light of the already notorious fact that he had lied to Vice President Pence. Whether Kushner or anyone else got careless in remarks to investigators is the next question Mueller will be looking to turn to prosecutorial advantage. Some media, including Business Insider, have speculated that Trump himself may be jeopardy for tweeting recently that he fired Flynn because Flynn had lied to the FBI as well as Pence—this is meant to be a big deal because it shows Trump knew Flynn was in legal danger when he asked then-FBI director James Comey to go easy on Flynn. And supposedly that’s obstruction of justice. In fact, it’s grasping at straws—a tacit admission that the Russian collusion story is bankrupt.