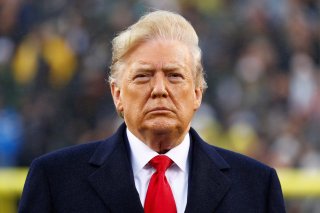 On Wednesday night, in a vote almost exclusively on party lines, Donald Trump became the first Republican president to become impeached—and the only one to suffer this fate during his first term in office. In voting for two articles of impeachment for abuse of power and obstruction of Congress, House Democrats gifted their base with the present they’ve had on their wish list for years. But will it pay off politically for the Democrats—or could it turn into a lump of coal in the party’s collective stocking?

The vote against impeachment was actually bipartisan, at least to the extent that a few Democrats bailed on their own party. Republicans unanimously opposed it, but Democratic Rep. Jeff Van Drew voted with the GOP, a party he’ll be switching to shortly. For her part, Rep. Tulsi Gabbard fudged, voting “present” on both articles of impeachment. Gabbard explained, “I could not in good conscience vote against impeachment because I believe President Trump is guilty of wrongdoing. I also could not in good conscience voter for impeachment because removal of a sitting president must not be the culmination of a partisan process.”

All day the House floor consisted of a procession of congressmen with little, if any, name recognition outside their home districts, taking their time in the spotlight to opine on impeachment. Some remarks, though, were notable. “If this impeachment is successful, the next president, I promise you, is going to be impeached, and the next president after that. If you set this bar as being impeachable, every president in our future will be impeached,” said Rep. Chris Stewart (R-UT). Many Republicans view the process as a case of congressional overreach, one that is bound to impinge upon Congress’ halting efforts to regain some of its sway in foreign policy that has, willy-nilly, been ceded to the White House over the decades.

Trump himself was having none of it. Despite White House denials that he wasn’t following impeachment, he sent out over forty tweets. A case in point: “SUCH ATROCIOUS LIES BY THE RADICAL LEFT, DO NOTHING DEMOCRATS. THIS IS AN ASSAULT ON AMERICA, AND AN ASSAULT ON THE REPUBLICAN PARTY!!!!” tweeted Trump in all-caps as the speeches continued. In the early evening, the president began flew to Battle Creek, Michigan, one of the critical swing states he won in 2016, to address a rally of supporters. Once again, he took a swing at the Clintons. “Do you think he calls her Crooked Hillary,” Trump told the crowd about Bill Clinton. “Maybe he just calls her Crooked.” He also referred to the 2016 election as “one of the biggest nights in the history of television.” In focusing on impeachment, Trump once more complained about “what they put my family through,” as he did in his six-page letter to House Speaker Nancy Pelosi.

It’s in swing states like Michigan and Wisconsin where the wisdom of impeachment will be decided, which is to say the politics of it all. Polls consistently have a majority of these states’ populations against removing President Trump, even if support verges on a majority nationally. This division is obvious. The past twenty-four hours have featured demonstrations and marches around the country in favor of impeachment.

Despite the impeachment vote, some House Democrats are wary of the upcoming Senate trial. A handful of them, led by Rep. Earl Blumenauer (D-OR), are trying to convince Pelosi not to send the approved articles forward, at least for now. Majority leader Steny Hoyer has also stated that this is something that Democrats should contemplate. If the House doesn’t recommend impeachment, the Senate cannot hold a trial.

Democrats are making the case that Senate Majority Leader Mitch McConnell would never hold a fair trial, or help Democrats obtain their preferred witnesses. But a Democratic delay seems unlikely. Republicans would view the turnaround as an enormous victory, proving that the Democrats are aware of their weak case and afraid to continue to prosecute it. While the sentiment that “Trump deserves his day in court” is not a relevant legal protocol, it’s an idea that’s caught on with a significant part of the voting public.

If impeachment is recommended to the Senate, it’s likely to be a bipartisan affair—in both directions. Senators Mitt Romney (R-UT), Susan Collins (R-ME), Lisa Murkowski (R-AL), and Cory Gardener (R-CO) are name-dropped as possible GOP defectors against the president, while Senators Joe Manchin (D-WV) and Kyrsten Sinema (D-AZ) are potentially poised to break Democratic ranks and vote to acquit the president. The question facing Trump is whether McConnell can corral his party or whether impeachment will take an unexpected turn next year. Trump himself will continue to be front and center, declaring at his rally, “They’re the ones that should be impeached, every one of them.” The battle is now joined.