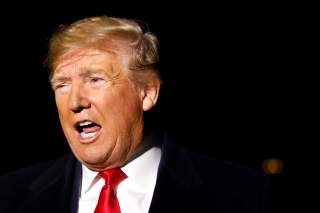 For over a month, impeachment has been the buzzword in the media and in Washington circles as the House conducted its behind-closed-doors inquiry into alleged malfeasance by President Donald Trump. Now that a full vote has taken place and the inquiry moves into its more public phase of live testimony, there’s no doubt that impeachment will continue to be the headline-grabber into the new year.

But does any of it really matter?

A new Wall Street Journal/NBC News poll says 49 percent of Americans support Trump’s impeachment and removal by the Senate. This includes 58 percent of independents who say they at least favor the inquiry taking place.

Furthermore, a Washington Post/ABC News national poll found the incumbent president trailing behind all three of his potential Democratic opponents by double digits. Among registered voters, former Vice President Joe Biden, Massachusetts Sen. Elizabeth Warren, and Vermont Sen. Bernie Sanders defeated Trump by margins of 17 percent, 15 percent, and 14 percent, respectively. Meanwhile, Trump’s approval rating hovers around 40 percent, which is where it has been his entire time in office.

These numbers would indicate a lion’s share of Americans would rather trade Trump out for any of his possible Democratic successors, and a burgeoning majority would like to see him removed even more expeditiously for “high crimes and misdemeanors.”

But if politics hinged on these things, Hillary Clinton would be president, not Trump. In 2016 the Democratic Party icon won nearly three million more votes than her businessman opponent on election day. This was close to the same margin George W. Bush defeated John Kerry in 2004. But to the continued chagrin of well-populated states like California and New York, the presidency is decided by the electoral college, not a direct democracy.

Trump won the 2016 election by having slim majorities in key states, and right now he’s on track to repeat his original upset. New surveys conducted by the New York Times and Siena College show the president performing much more competitively in crucial swing states than in the previously mentioned national polling. These include Michigan, Pennsylvania, Wisconsin, Florida, Arizona, and North Carolina.

“The most interesting finding in the recent swing-state polling was that two-thirds of 2016 Trump voters who switched to voting for the Democrats in the 2018 midterms plan to vote for Trump again in 2020,” says Daniel McCarthy, columnist at Spectator USA. “Democrats and their enablers have been deluding themselves with the belief that 2018 is the baseline for 2020. It was Paul Ryan's Republican Party that lost the 2018 midterms. Trump is a very different brand in the eyes of battleground voters.”

That brand extends to impeachment as well. Polling by the New York Times and Siena College in the same six battleground states show collectively that while 50 percent of registered voters support the inquiry going forward, only 43 percent approve of impeachment and removal. This is noticeably less than the national average when every percentage point counts.

“It suggests Democrats shouldn't get overconfident on either impeachment or 2020. Trump is still competitive in the Upper Midwest and a leftward lurch in the Democratic primaries could help him,” says James Antle, editor of The American Conservative.

Speaker of the House Nancy Pelosi, the most adroit politician in her position in the last couple of decades, realizes as much. “What works in San Francisco does not necessarily work in Michigan,” she said in an explosive interview with Bloomberg News this week. “Remember November . . . You must win the Electoral College,” she said.

For months, Pelosi was a roadblock in the way of impeachment, which was supported by more progressive members of the caucus since Trump took the oath of office (and several even before that). She relented under pressure, in late September, hoping that either her party would win big, or political repercussions from Midwest voters would be benign.

The impeachment process, as everyone predicts, will sail through the House. But in the Senate, only Sen. Mitt Romney of Utah, Sen. Susan Collins of Maine Sen. Lisa Murkowski of Alaska, and Sen. Cory Gardner of Colorado seem even mildly open to voting for removal. The former out of conviction, and the latter three out of the electoral calculation. That’s far below the twenty Republican votes necessary to remove the president and doesn’t include wavering Democrats like Sen. Joe Manchin of West Virginia and Sen. Kyrsten Sinema of Arizona who may well break from liberal ranks and vote with the GOP.

Every major Democratic presidential candidate supports impeachment, making it a non-issue in the primary. How long until this hot political question becomes a distraction from real voter concerns like health care and wages? Will a successful House impeachment just become a footnote in the Democratic party platform next summer?

The Democratic candidates can continue to refer to Trump as “the most corrupt president” in American history, but if they’re unable to act on the description, and if the key American voting blocs don’t raise a fuss, then their mantra will turn from a signal of virtue to a signal of impotence.