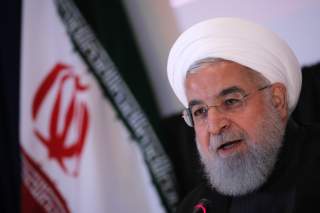 Democratic candidates for president are already taking positions on whether they would honor the 2015 nuclear deal with Iran, known as the Joint Comprehensive Plan of Action (JCPOA). The deal was negotiated by the Obama administration along with other international partners but the Trump administration has refused to honor it, raising tensions with Iran and European allies who see the deal as essential. Senators Kamala Harris, Bernie Sanders and Elizabeth Warren, along with two lesser-known candidates, told Al-Monitor that they would return to the deal without precondition, as long as Iran continues to abide by the deal. Another candidate, former Housing Secretary Julian Castro, then announced his support for that approach.

But increasingly some in the Democratic Party’s foreign policy trust have been recommending approaches that hew closely to Trump’s overall policy. Former Obama administration officials Eric Brewer and Ilan Goldenberg, now at the Center for New American Security, argue that Iran abiding by the term of the nuclear deal should be discounted as unilateral concessions and that America returning to its commitments should be contingent on Iran agreeing to a completely new set of American demands. They write that “[s]ince Tehran has decided that abiding by the nuclear deal is in its interests despite Washington’s withdrawal, a U.S. return and the corresponding sanctions relief would essentially be a unilateral concession to Iran. Washington will have the ability to ask for something in return.”

Former State Department official PJ Crowley argues that “even though Trump has taken the wrong approach for the wrong reasons, Democratic candidates should not ignore the leverage his strategy has created.” Obama era officials Richard Nephew and Robert Einhorn are calling for the discarding of the JCPOA in favor of an entirely new negotiation in which Iran would make concessions so deep and structural that the ensuing deal would garner broad support in Washington, presumably even from Republicans. They hint at “improving” sanctions relief for Iran but also call for new “sanctions, counter-proliferation measures, and deterrence.”

What these influential Democratic foreign policy experts are recommending is not a discarding of Trump’s policy, but a limited refining of it. They all, Nephew and Einhorn especially, go to great pains to disassociate their proposal from Trump, but what they recommend largely amounts to the rhetorical reframing of Trump’s Iran policy and a scaling back some of the uber-maximalist demands issued by Pompeo.

Many analysts have argued that Europe and Iran are essentially waiting out Donald Trump, holding firm to the existing terms of the deal and hoping that a future Democratic president would return to international norms. But this strategy, even if a Democrat is elected, seems increasingly unviable as Democratic foreign policy hands warm up to Trump’s approach.

The recommendations of the aforementioned Democratic Party experts assume that Iran will simply calculate that making more concessions will be worth the sanctions relief. But from the Iranian standpoint, if Tehran validates the notion that abrogating an agreement generates “leverage,” why would any hypothetical future agreement be honored? As no concession Iran would realistically make could satisfy the full spectrum of demands Washington has of Iran, any deal would naturally be followed by more sanctions and more demands. An honest observer of Washington would have to admit that Iran even giving credence to this policy framework would be welcomed in Congress with a raft of new sanctions legislation meant to boost “leverage.”

Crowley claims that the Iranian public, weary of economic pain, would demand the United States receive satisfaction in exchange for sanctions relief. This is also a flawed assumption. Recent polling data from Iran makes clear that Iranians overwhelmingly believe that international interlocutors will not abide by their promises. Iran may present an unproven environment for polling accuracy but the results are unsurprising. The American approach in question promises assuredly temporary and anemic sanctions relief in exchange for an internationally unprecedented spectrum of new security concessions no country has ever made without losing a war. No amount of economic hardship can modify this position if the promised benefits of a deal seem like a mirage.

Brewer and Goldenberg do mention that nuclear negotiations carried the theoretical possibility of dealing with non-nuclear issues at a later point. But that was based on the Obama administration engaging in diplomatic conflict resolution and building confidence through mutual implementation. President Rouhani referred to this as a “win-win” proposition and made it a key feature of his case for the JCPOA before a hesitant Iranian body politic. The United States violating the deal and a return to what Stephen Walt described as a diplomatic posture reliant “excessively on ultimatums and coercive pressure” obviously poisons that well.

In politics, both domestic and international norms supplement laws to create mutually beneficial safety and civility. Actors abide by norms because of the implication that violating them would provoke retaliation by both friend and foe undermining the overarching policy. Trump’s politics presupposes that the disadvantages of breaking norms are simply overstated. He assumes, and is often proven correct, that other actors will largely fear that aggressive reaction or a tit-for-tat discarding of norms as being more dangerous to their interests than trying to reinforce them with their own faithfulness. Trump’s decision to leave the JCPOA is a projection of that viewpoint on the international stage. Its success ensures that other actors continue to be restrained by norms while the norms breaker enjoys new strategic flexibility.

Europeans’ promises to introduce new measures to protect their business ties with Iran are failing in no small part because of Trump’s assumption about their tepid response to his norms-breaking came to fruition. As the Washington Post observed, in the opinion of “industry associations, government officials, analysts and representatives of companies that have been targeted, [i]n the struggle to determine whether the nuclear deal lives or dies, the United States has been willing to cross boundaries that Europe has, thus far, been reluctant to push.” Democrats are now internalizing this lesson.

Einhorn and Nephew acknowledge that Iran may leave the deal. However, Crowley, Goldenberg and Brewer base their analysis on the assumption that Iran not having left the JCPOA so far represents an irreversible decision never to do so. This is a deeply problematic assumption underpinning a dangerous miscalculation. European efforts to save the JCPOA are now reaching the implementation phase with little hope of meaningful success and the chorus of cynicism towards the JCPOA is both louder and coming from the pinnacles of Iran’s nuclear agency and governing structure.

Europe’s failure to provide Iran with meaningful economic benefits make Iran’s continued implementation of the JCPOA a strategic disadvantage, emboldening both Trump and the most hawkish instincts of establishment Democrats. For Europeans, Iran’s continued implementation makes the destabilizing nature of Trump’s policy seem manageable, but for Iran, the effect on its economy is real. This represents an inflection point; another will come during the presidential election next year.

Iranian policymakers typically chafe at the idea of making policy decisions based on campaign season rhetoric, but as the last presidential election and the ensuing Trump policies proved, policy frameworks adopted on the campaign trail are not easily supplanted by conventional assessments of interest after the election. Iran may not necessarily fully leave the JCPOA. Policymakers in Tehran can take steps reducing its participation in the JCPOA, such as reinstalling centrifuges and increasing the level of enrichment to 20 percent (weaponization is 80 percent). They could also keep IAEA monitoring, which the Europeans seem to care for the most.

This will certainly carry risks. The Europeans can reimpose sanctions of their own, but their companies have largely left anyway. America can impose new sanctions or threaten war, but is largely already doing in the context of what is now an obvious regime change campaign. As the saber rattling and frantic action imperative America once attached to Iran’s nuclear program shifts towards other topics, Iran will have to consider whether its full compliance with the JCPOA really mitigates these risks or merely delays them to its own disadvantage.