Trump's Mueller Worries Were On Display at the G20 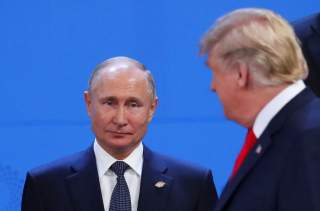 Donald Trump’s last minute cancellation of his scheduled meeting with Russia’s Vladimir Putin at the G-20 summit certainly raised a few eyebrows. The ostensible reason for Trump’s decision was Russia’s brazen seizure of three Ukrainian ships and their sailors in the Kerch Strait, in violation of a 2003 agreement that provided for free maritime passage for both countries. Yet Putin’s previous acts of aggression did not deter Trump from fawning upon the Russian leader when they met in Helsinki in July. Moreover, Trump’s apparent snub of Putin seems even more puzzling given his decades-long assiduous courting of Putin, which extended into the 2016 presidential campaign, in order to obtain his approval of a Trump hotel in Moscow. Clearly, the Russian action in the Kerch Strait—Moscow has yet to release the Ukrainian sailors captured in the naval clash—is nothing more than a pretext. What, then, was Trump’s real motivation?

At the very same time that the president was about to leave for the G-20, his long-time fixer and troubleshooter, Michael Cohen pleaded guilty—again—this time for lying to the Congress. Trump characterized his former lawyer as “weak” and a turncoat who was maneuvering to obtain a lighter jail sentence. Yet beneath his usual blustery veneer, the President knows full well, as Jacob Heilbrunn and others have pointed out, that Cohen presents a far bigger threat to him than Paul Manafort, or just about anyone else. Cohen knows where the Trump organization’s skeletons are buried, and, more important, who buried them. Trump could have calculated that now was not the best time to hobnob with Putin, which would only have stimulated further speculation regarding what Cohen was telling Special Counsel Robert Mueller and his team of investigators. Putin, who is nobody’s fool, may well have seen through Trump’s ostensible snub and recognized that a meeting would do neither of them much good.

There is a good chance that Cohen’s revelations to Mueller’s team will not definitively implicate the president. Trump has never been a person who delves into details, and he may not have been intimately aware of the specifics relating to the contacts between his presidential campaign, or for that matter, between the Trump Organization and the denizens of the Kremlin. On the other hand, what Cohen has been telling Mueller’s investigators may well implicate Trump’s son Donald Jr. and his son-in-law Jared Kushner. Finally, Trump obviously did not want to create even more of a public stir and stimulate even more negative speculation regarding his family by meeting with Putin.

Indeed, his desire to protect Kushner—he of the yet-to-be-seen mother of all Middle East peace plans—from negative media speculation may also have prompted him to avoid Kushner’s erstwhile bosom buddy, Crown Prince Mohammed bin Salman. Despite his vigorous denials, the Crown Prince’s reputation remains under a cloud because of ongoing suspicion that he ordered the murder of Washington Post columnist Jamal Khashoggi. So Trump likely concluded that it was better to keep away from the Crown Prince as he was keeping away from Putin. Interestingly, the Crown Prince and Putin high-fived each other—was this with Trump’s blessing? Anything is possible in this Administration.

At the end of the day, far more important than any snub at the G20 is how the administration will respond to Putin’s latest violation of international law. Will the United States work in concert with its allies to apply new sanctions on Russia and its leadership? Will Washington further step-up its belated support of the Ukrainian military? Or will Trump sit on his hands? If he does little to nothing in the next few weeks, it will be very clear that the canceled meeting with the Russian leader was not an act of statesmanship, but one of showmanship, very much in character for the star of a television reality show, rather than for the leader of the Free World.