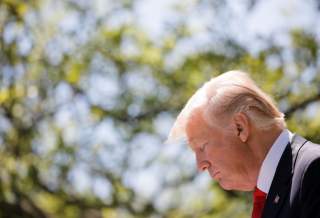 THERE IS A widespread consensus that Donald Trump is a highly transactional figure who has no strategic sense—much less an actual strategy. That is not entirely correct. He does have a coherent strategy, but it is one that is firmly based on a nineteenth-century view of America’s role in the world. In that regard, his strategic perspective contrasts sharply with many of the men he professes to admire such as Russia’s Vladimir Putin and China’s Xi Jinping. Like Trump, Putin is often mischaracterized as lacking a strategic worldview. Unlike Trump, however, both Putin and Xi are firmly rooted in the twenty-first century and both understand how they can best achieve their ambitions by drawing upon their respective nation’s human and material resources, which is the essence of strategy.

Putin has most clearly demonstrated his strategic acumen in the Middle East. In contrast, Donald Trump wishes to lower America’s profile in the region. Despite limited resources and a weak economy, under Putin’s leadership Russia has entrenched itself more deeply in the Eastern Mediterranean and the Middle East than the Soviet Union ever did. Moreover, Moscow has managed to maintain good relations with states that are hostile to each other. Russia has strengthened its position in Syria with a new long-term lease on the Tartus naval base and a similar lease on an air base at Khmeimim—its first ever such facility in the Middle East.

Russia has worked closely with Iran in Syria and has ongoing contacts with Hezbollah, Tehran’s Lebanese proxy. It also maintains good relations with Iran’s (and Syria and Hezbollah’s) avowed enemy, Israel, whereas the Soviets had no relations with the Jewish state after 1967. Russia has also re-engaged with Egypt for the first time since the Soviets were expelled in 1972; like Israel, Egypt sees Iran as a security threat. Finally, Russia has moved closer to Turkey, including the expected sale of arms to Ankara, even as it also has excellent ties to Cyprus, which has long opposed Turkey’s support for the Turkish Republic of Northern Cyprus.

Xi Jinping, now effectively China’s president for life, has firmly established his country as an economic, political and military force to be reckoned with. Whether it is the Asian Infrastructure and Investment Bank, which Beijing dominates, China’s One Belt/One Road Initiative or its military buildup in the South China Sea, Xi has pursued a strategy that has effectively outflanked an otherwise militarily more powerful—at least for the time being—United States. Donald Trump’s decision to withdraw from the Trans-Pacific Partnership (tpp) trade agreement has only further expanded the strategic vacuum that Xi Jinping has rapidly begun to fill.

Finally, though Trump has claimed credit for the thaw in relations between North and South Korea, any reconciliation between the two states would not have been possible without Xi Jinping’s guiding hand. China is North Korea’s lifeline to the world. It is also the Republic of Korea’s leading trading partner, with twice as many exports to the South as the United States and nearly twice as many imports. Moreover, unlike Washington, but like Seoul—and for that matter Tokyo and most likely Moscow—China has no interest in a united Korea. That Kim Jong-un’s first foreign visit since taking office was to Beijing, and that it took place just weeks before he agreed to meet with both South Korean president Moon Jae-in and Donald Trump, certainly appears to indicate that Xi Jinping had more of a hand in orchestrating the summits with South Korea and the United States than the American president’s bluster over the previous months. Indeed, if there is an agreement to end the conflict between North and South Korea, it could involve the withdrawal of American forces from the peninsula. In that case—and even if no American troop withdrawal were to take place—Xi, by virtue of China’s proximity to Korea, its economic stranglehold over the North and its powerful economic ties to the South, is more likely to be the guarantor of the arrangement than the United States. As a result, Chinese dominance of East Asia would become even more pronounced.

Trump’s relations with Mexico and Central America seem to go from bad to worse. His calls for a border wall, his preoccupation with the infiltration of drugs and gangs though America’s southern border, his imposing tariffs on Canadian steel and aluminum, and his determination to revamp American trade agreements—which include the Central America Free Trade Agreement—have stoked long-standing tensions with America’s neighbors. At the same time, Iran, with close ties to Venezuela, and more recently China, have expanded their influence in America’s backyard. Finally, Trump has said little about Africa, other than to describe black African countries in the most derogatory terms, even as China maintains its strong economic influence south of the Sahara.

It is certainly the case that the Trump administration has produced a National Security Strategy that establishes security priorities, confirms the importance of America’s alliances and identifies both Russia and China as major threats to U.S. and allied interests. Consistent with that strategy, Trump has successfully pressed the case for a major boost in defense spending, which should help the armed forces reverse critical readiness and modernization shortfalls. In particular, he has authorized a significant funding increase for what is now called the European Deterrence Initiative, which aims both to deter Russian encroachment and/or disruption of the small Baltic states, and to reassure those vulnerable NATO Eastern European allies. He has also authorized a significant modernization of America’s strategic nuclear forces, while increasing spending on missile defense, thereby signaling to Russia that he was serious when he asserted that the United States would maintain its nuclear superiority indefinitely.

After a rocky start, he has managed to improve relations with several key allies, notably France, Britain, Japan and South Korea, as well as with China, America’s leading Asian competitor. Indeed, the joint Franco-British-American strike on Syrian chemical facilities in April 2018 would have seemed unimaginable when Trump first took office fifteen months earlier. Until then, he had both blasted the NATO allies for insufficient defense spending and disparaged, if not ignored, Article Five of the North Atlantic Treaty.

Nevertheless, Trump himself has not always acted in accordance with the document issued in his name; a number of the president’s policies belie the lofty goals of his strategy document. His expressed desire to withdraw forces from Syria would expand that country’s security vacuum that not only Russia, but Iran, Turkey, the Kurds, Hezbollah, various resistance movements including Islamists of different stripes, Israel (at least from the air) and of course the Assad regime are all trying to fill. The situation on the ground already increasingly calls forth memories of the Balkans in 1913. An American withdrawal, like the assassination of Archduke Franz Ferdinand, could ignite a wider and deadlier regional war.

In contrast to the National Security Strategy’s assertion that “We remain committed to helping facilitate a comprehensive peace agreement that is acceptable to both Israelis and Palestinians,” Trump’s unstinting support for Benjamin Netanyahu’s government and policies, including the transfer of the U.S. Embassy to Jerusalem, represents another potential flashpoint for more trouble in the Middle East. The president’s clear signal that his administration is not interested in entertaining Palestinian grievances may have few consequences in the short term, despite the ongoing weekly Gaza protests. Over time, however, it could prompt another far bloodier uprising by increasingly frustrated and desperate Palestinians that could force the Gulf Arabs to back away from their covert cooperation with Israel against a common Iranian threat.

Trump’s decision to walk away from the Iran deal, formally known as the Joint Comprehensive Plan of Action, has both rattled allies (other than Netanyahu and the Sunni Gulf), and infuriated Tehran, which has threatened to renounce its adherence to the nuclear Non-Proliferation Treaty. Unless the Europeans, led by French president Emmanuel Macron, are able to convince Washington to delay full implementation of sanctions, while also convincing Iran to expand the scope of the agreement—especially by including limits on missile production and delaying the agreement’s sunset provisions—which remains an unlikely prospect, the United States will confront not only a new and urgent crisis with Iran, but also with its key European allies, whose firms would be subject to sanction if they were to trade with Iranian entities.

Finally, Trump’s support for the ongoing Saudi and Emirati operations in the Yemen civil war, as well as his inability to foster a compromise between those two states (and Bahrain and Egypt) and Qatar are further harming America’s image in the region. All in all, the president’s views on the Middle East effectively have removed the United States from its long-standing position as the power with which all in the region had to reckon. That Vladimir Putin has eagerly and rapidly sought that role and met some success in doing so should come as a surprise to no one. Moreover, once effectively sidelined in the Middle East, it may prove difficult for America to reinsert itself into that troubled part of the world.