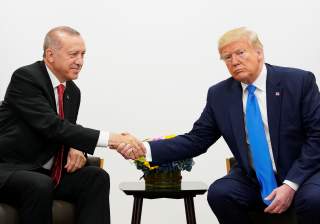 A key drawback of Washington’s growing global list of allies and security clients is that some of them hate each other more than any enemies of the United States. The current turmoil associated with President Donald Trump’s decision to withdraw American military personnel from northern Syria highlights the problem. That deployment served as a symbolic barrier discouraging Turkey from attacking the Syrian Democratic Forces (SDF), the Kurdish-dominated militia that had worked with the United States to combat ISIS.

That collaboration has been a sore point in relations between Washington and Ankara for years. Turkish President Recep Tayyip Erdoğan considers both the SDF and the Kurdistan Workers Party (PKK)—a Marxist insurgent group that has been waging a secessionist war in southeastern Turkey for over three decades—to be terrorist organizations.

As a result, the Trump administration had been on an increasingly shaky diplomatic tightrope, endeavoring to placate both Ankara and the SDF. In November 2017, Trump tried to ease the Erdoğan government’s seething resentment by pledging to stop providing weapons to the SDF. His concession, though, had minimal effect. In August 2018, Erdoğan accused the United States of a “stab in the back” for continuing to support the Syrian Kurds.

Critics who accuse Trump of giving Ankara a “green light” to launch the current military offensive against the SDF ignore the inherent dilemma in U.S. policy. Washington has certainly treated the Syrian Kurds as de facto allies in the fight against ISIS. But Turkey is more than a de facto ally—it is a formal U.S. treaty ally and a fellow member of the North Atlantic Treaty Organization (NATO).

It is certainly possible to criticize that relationship, and I am on record (along with other critics) for advocating Turkey’s expulsion from NATO for a growing list of domestic and foreign policy misdeeds. But until the Alliance takes such action, the United States has both moral and legal obligations to Ankara. Washington cannot simply disregard Ankara’s contention that the SDF and PKK pose a threat to Turkey’s security and territorial integrity. Certainly, the Trump administration cannot do so if it wishes to maintain even a semblance of cooperation with its NATO ally.

The current armed conflict between Turkish and Kurdish forces in northern Syria is a graphic example of what happens when two U.S. allies hate each other and pursue irreconcilable objectives. But that situation is not the only case in which Washington has faced the task of trying to play referee between feuding allies.

Throughout the Cold War, U.S. leaders fretted that NATO members Greece and Turkey would come to blows, thereby disrupting the Alliance and playing into the hands of the Soviet Union. Indeed, the two countries came perilously close to doing so in 1974, when the ruling Greek military junta subverted the moderate government of neighboring majority-Greek Cyprus, and Ankara responded with a military invasion (allegedly to protect the Turkish Cypriot minority) that ended up occupying nearly forty percent of Cyprus.

Tensions (albeit less severe) have flared frequently since that episode. Ankara and Athens backed opposite sides in the Balkan conflicts that marked the breakup of Yugoslavia in the 1990s. And to this day, Turkish warplanes continuously violate airspace that Greece claims, and they are typically shadowed or confronted by Greek aircraft. Indeed, much of Athens’ defense budget is devoted to deterring its ostensible NATO ally. Washington could well be called upon again to resolve a Greek-Turkish feud that threatens to spiral out of control.

The United States currently is dealing with a similar headache on the other side of the world involving its principal East Asian security allies, Japan and South Korea. The habitually frosty relationship between Tokyo and Seoul over Japan’s harsh treatment of Koreans during the first decades of the twentieth century has intensified in recent months.

In fact, their escalating bilateral trade dispute is spilling over into the diplomatic and security arenas. South Korea has withdrawn from an intelligence-sharing agreement with Japan, much to Washington’s annoyance as the Trump administration seeks to get its two key allies on board regarding policy toward both North Korea and China. Instead, the bilateral estrangement may be growing worse, with a longstanding territorial dispute over tiny islands (called Takeshima in Japan and Dokdo in Korea) now flaring again. Washington is working to ease tensions between its allies on the assortment of disputes, but progress has been minimal. Although a Japanese-South Korean armed clash is only a remote possibility, it cannot be ruled out given the mounting animosity.

American Conservative senior editor Daniel Larison identifies the core problem with U.S. policy regarding its official or de facto security alliances. “The U.S. makes too many commitments to too many mutually opposed states and groups. That creates absurd scenarios where the U.S. either has to defend a proxy from an ally or stand aside while the ally attacks the proxy. No matter which side the U.S. chooses, it will be betraying someone in the name of supporting one of its partners.” He adds: “That is an argument for reducing the number of partners and commitments that the U.S. has.”

Indeed, it is a powerful argument for taking such action. Instead, Washington seems determined to add even more mutually quarrelsome nations to its already lengthy roster of security dependents, as the continuing expansion of NATO’s membership confirms. It is a foolish strategy that multiplies the number of occasions when U.S. leaders will face another dilemma similar to what it is now confronting in Syria.

Ted Galen Carpenter, a senior fellow in security studies at the Cato Institute and a contributing editor at the National Interest, is the author of 13 books and more than 850 articles on international affairs. His latest book is NATO: The Dangerous Dinosaur (2019).