Is Tulsi Gabbard Right About Syria? She’s Not Wrong. 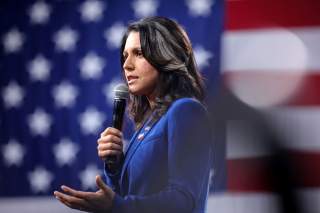 Is Tulsi Gabbard an “apologist” for the Syrian regime? How about a “stooge” of the Kremlin? These are just some of the questions being asked of the congresswoman from Hawaii as she bids to become the Democratic nominee for president, but they are entirely the wrong ones. Media outlets and Gabbard’s political rivals should, instead, consider the arguments that have led this veteran of the Iraq War to recommend against removing Syrian dictator Bashar al-Assad from power. Better yet, they could explain how an alternative set of policies would promote U.S. interests and improve the lot of the long-suffering Syrian people.

Of course, it is fair to ask any presidential hopeful why they would agree to meet with a murderous despot like Assad, as Gabbard did in January 2017. It is also reasonable to question whether Gabbard’s rejection of military interventions as a tool of statecraft is the right approach to U.S. foreign policy (she once tried to legislate against regime change in Syria). But it is unhelpful at best to insinuate that Gabbard’s foreign-policy positions are cynical or anti-American. They are neither.

Gabbard’s approach to Syria is built upon two core beliefs about U.S. foreign policy. First, the United States must leave behind its recent history of engineering the downfall of foreign regimes. Second, the U.S. military’s top priority should be to eliminate terrorist groups such as ISIS and Al Qaeda. From these two premises, a third foundation of Gabbard’s foreign policy can be inferred: that the United States must sometimes tolerate the existence of brutal foreign governments, especially if they share a common interest in fighting the same terrorist groups as America.

None of these are radical assumptions about American foreign policy. Indeed, Gabbard’s anti-interventionism is tightly aligned with the prevailing zeitgeist in U.S. politics. According to polling data, voters today are opposed to U.S. involvement in Yemen, supportive of a withdrawal from Afghanistan, and roughly evenly split on the question of whether the United States should cease operations in Syria. Military veterans are among those most critical of the so-called “forever wars” in Afghanistan, Iraq, and elsewhere.

Gabbard’s insistence that the U.S. military should focus on counterterrorism rather than regime change is also well within the mainstream of political opinion. In this regard, Gabbard is not unlike the last Democratic occupant of the Oval Office. After all, it was Barack Obama who, as a candidate for the presidency, explicitly coupled his headline promises to end the Iraq War and shrink America’s overall military footprint with a commitment to ramp up the fight against Al Qaeda and their Taliban enablers in Afghanistan and Pakistan.

Of course, it should not be controversial to want to destroy the array of terrorist groups ranged against the United States, its allies, and innocent civilians the world over. It only becomes a controversial stance once it is understood that a straitened focus on counterterrorism can sometimes require cooperation with profoundly undesirable governments. “My enemy’s enemy is my friend” is hardly an inspiring rallying cry, especially when your enemy’s enemy is Bashar al-Assad, one of the most hated men on the planet.

Even on this point, however, Gabbard’s realist grasp of international politics can hardly be considered fringe. The post–9/11 “global war on terror” was almost entirely prosecuted in concert with dictatorial strongmen, from Russia to China to Saudi Arabia and elsewhere. In Syria itself, none other than Vice President Joe Biden once lamented that the U.S.-led intervention in the war-torn country had been too focused on weakening the Assad regime at the expense of defeating the panoply of terrorist groups operating inside the country.

Nor should it be forgotten that, despite much sound and fury from Capitol Hill, most in Congress have tended to agree with Gabbard that the United States should not go to war with Assad. At no point since 2011 has Congress supported a military intervention to topple the regime. In the fall of 2013, an overwhelming majority of lawmakers could not even stomach President Obama’s relatively modest suggestion that Congress should authorize a limited set of airstrikes against the Assad regime as punishment for its use of chemical weapons. Support for President Donald Trump’s eventual strikes against Assad in 2017 and 2018 was forthcoming, but tentative and qualified.

From Gabbard’s perspective, it thus makes little sense to expend political energy and military resources opposing the Assad regime for its (very real, and very heinous) abuses of human rights. If there is no wellspring of support for removing Assad from power, then why labor under the pretense that the United States is committed to his ouster? Why not instead focus on the common enemies that all agree must be defeated: ISIS, Al Qaeda, Jabhat al-Nusra, and other terrorist organizations?

Gabbard’s position can fairly be described as ruthless and even callous, but it is nevertheless rooted in a clear and defensible logic. This is not nothing. For eight years, many lawmakers have tried to have it both ways on Syria: falling over themselves to condemn Assad as a butcher but being conspicuously reluctant to sanction a meaningful military intervention. This approach has done nothing to end or contain the raging civil war.

The reality is that decisionmakers in Washington already operate based on a bleak understanding that Assad will remain in power for the foreseeable future. Under both President Obama and President Trump, the de facto policy of the United States has been to leave the Assad regime in place while pursuing counterterrorism operations in areas of Syria occupied by ISIS and other terrorist groups. As president, Gabbard would replace this tacit acceptance of Assad with a policy of coordinating with the Syrian military against known terrorist groups. She would presumably end support to anti-Assad rebel forces, rescind America’s nominal insistence that Assad step down, and cease to harangue the regime for its war crimes.

To be sure, these are sickening policies to contemplate. Bashar al-Assad is a tyrant, a murderer, and a war criminal. In an ideal world, he would face justice for his wrongdoing. But if there is no alternative policy that the United States could pursue in Syria that would end the suffering of the Syrian people, bring Assad and his henchmen to justice, and eliminate terrorist groups operating in the country all at the same time, then it must be conceded that Gabbard’s plan makes at least some sense.

This is the crux of the issue when it comes to America’s Syria policy: Is there a practicable policy to be implemented that can protect the lives and dignity of the Syrian people from the horrors of the Assad regime without dragging the United States into another unwinnable war? If the answer is yes, Gabbard’s calls to tolerate Assad can rightly be dismissed as unconscionable. But if the answer is no, the congresswoman must be taken seriously.

Given the humanitarian crisis in Syria, this is a debate that sorely needs to be had. It is possible that other candidates have a better analysis than Gabbard of the situation on the ground. They might even be able to provide concrete proposals for how the United States can avoid the ugliness of reconciling itself to Assad’s political survival. But if so, the American people deserve to hear these ideas. So far, they have not.