Turkey and Russia Jockey for Power in the South Caucasus 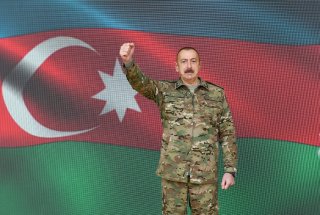 One of the many geopolitical flashpoints left in the wake of the Soviet collapse, the Nagorno-Karabakh conflict erupted when a majority-Armenian autonomous region within the Azerbaijan Soviet Socialist Republic voted to secede and to unify with neighboring Armenia. Following tens of thousands of casualties and numerous reports of ethnic cleansing, Armenia and Azerbaijan negotiated a ceasefire in 1994 with Moscow acting as the mediator. Barring minor skirmishes over the following decades, the conflict has remained largely frozen—until now. In late September, Azerbaijan launched a full-scale war to retake Nagorno-Karabakh. Thousands of combatants on both sides are already dead, and fresh war crimes are being committed weekly.

Ankara’s fingerprints were all over the 2020 Nagorno-Karabakh conflict since its inception. Previously negligible in volume, Turkish arms sales to Baku exploded in the months leading up to the Azerbaijani offensive. Just weeks prior to the offensive, Turkish and Azerbaijani troops conducted large-scale exercises in the South Caucasus. Earlier that summer, Azerbaijan’s Deputy Defense Minister reportedly met with the Turkish Minister of National Defense to discuss how to respond to Armenian “provocations.” Given this overwhelming weight of evidence, it strains credulity to suggest that Ankara was in no way implicated in Azerbaijan’s decision to retake Nagorno-Karabakh by force. Turkey’s subsequent involvement is even less ambiguous. There is extensive documentation to support the charge—formally leveled by Paris in early October and later echoed by Moscow—that Turkey recruited thousands of mercenaries from Syria and Libya to fight in Nagorno-Karabakh.

Whereas all of the other parties currently involved in brokering a settlement to the Nagorno-Karabakh conflict—Russia, the United States, and France, collectively known as the “Minsk Group”—continue to profess their neutrality, Erdogan makes no secret of his government’s avowed support for Azerbaijan: “Turkey wholeheartedly supports Azerbaijan’s just struggle for the liberation of its lands,” said the Turkish leader at an October business forum. This development has, in some ways, been long in the making: Erdogan has spent years cultivating the pan-Turkish idea that Turkey and Azerbaijan are “One Nation, Two States,” bound by a shared ethno-cultural identity and geopolitical destiny.

This creeping convergence has happened with little comment or action from Moscow—and not just in Azerbaijan. From lobbying for Kazakhstan’s transition away from the Cyrillic alphabet to erecting a quasi-autonomous Turkish enclave in Georgia’s Muslim regions, Ankara is slowly but surely carving out overlapping pan-Turkic and Neo-Ottoman spheres of influences in southern border zones vital to Russia’s security interests. Nor does Turkey make a secret of this vast influence campaign on post-Soviet lands: “The Turkish Republic is the inheritor of the great Ottoman Empire, it must create an allied union with Azerbaijan, Kazakhstan, Uzbekistan, Kyrgyzstan, and Turkmenistan, even at the cost of confrontation with Russia,” declared a former head of the Turkish Cooperation and Coordination Agency (TIKA), a government agency responsible for foreign aid and development assistance.

Even more worryingly for Russia, there are a growing number of reports that Turkey is making direct overtures to Russia’s Muslim ethnic minorities, including Tatars and Bashkirs, on the basis of a shared pan-Islamic identity.

When seen in its proper geopolitical context, the resurgence of the Nagorno-Karabakh conflict is the culmination of long-held Turkish imperial ambitions in the South Caucasus. Russia is ill-equipped to counter these ambitions, at least not without incurring serious costs. At a time when Russia and Turkey are engaged in a wide range of economic and military projects—the South Stream pipeline, joint development of the S-500 missile system, numerous arms export contracts, and a sizeable overall trade volume—Moscow is loath to confront Erdogan’s expansionist blend of Neo-Ottomanism, pan-Islamism, and pan-Turkism head-on. The Kremlin also may very well be worried that such a confrontation could backfire, inadvertently facilitating an unwelcome—from Moscow’s perspective—reconciliation between Turkey and the rest of NATO.

But as Erdogan becomes progressively bolder in asserting his interests throughout Russia’s southern underbelly, it remains to be seen if the Kremlin becomes willing to draw red lines on Turkish expansionism. Even now, Ankara is confounding the Minsk Group’s fledgling attempts at brokering a peace by prodding on the Azerbaijani war effort; by insisting, in opposition not only to the Minsk Group but to every other multilateral institution calling for peace talks, that Baku should push forward with a military solution. Throughout October, Ankara liberally exercised what increasingly appears to be its veto over Azerbaijan’s foreign policy to undermine Russian and U.S.-led attempts at brokering a ceasefire, with Turkey’s Foreign Minister Mevlut Cavusoglu arguing that an unconditional ceasefire amounts to “rewarding the occupier.”

It bears noting that Russia and Armenia are formally military allies under the Collective Security Treaty Organization (CSTO). If Armenian territory (excluding Nagorno-Karabakh, which is legally recognized as part of Azerbaijan) comes under attack—which the Armenian government alleges has already occurred—Russia would be formally obliged to defend it.

Even as Ankara continues to fuel a two-month-long proxy war along Russia’s southern borders and against Moscow’s military ally, Russian President Vladimir Putin insists on a diplomatic solution within the Minsk Group framework—just earlier today, Putin discussed the Nagorno-Karabakh issue with French President Emmanuel Macron. Still, the conflict speaks to a broader pattern of Turkish power projection in the South Caucasus—one that will pose a cascading threat to Russia’s core security interests for so long as it goes unchecked.