UK Election: Why Jeremy Corbyn Is Surging Against Boris Johnson 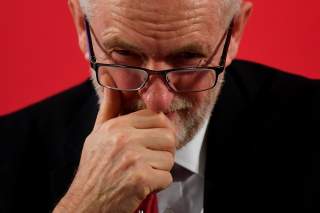 Voters in the United Kingdom will head to the polls on December 12. Determined that their country should leave the European Union without further delays, they will rally around their pro-Brexit prime minister, Boris Johnson, and expel from parliament every establishment politician who has spent the past three years frustrating the will of the British people. Having been returned to power in a landslide, Johnson’s government will move swiftly to terminate Britain’s EU membership, bury the left-wing Labour Party as a credible electoral force, and lay the groundwork for a new era of Tory hegemony in UK politics.

At least, that is what Johnson is hoping will happen. He might be right. But even if recent opinion polls show the Conservatives to be trouncing the Labour Party, their nearest rivals, by as much as 17 percentage points, a victory for Johnson is far from assured. One need look no further than Johnson’s immediate predecessor, Theresa May, to find an example of a prime minister who began a General Election campaign with a strong wind to her back, only to finish in a worse position than she started.

There are several reasons why Johnson’s bid for a renewed mandate might come undone over the next few weeks. But if he fails to remain prime minister on December 13, then there will be one man in particular whom Johnson might feel tempted to blame: Donald Trump.

American presidents are not supposed to meddle in the democratic elections of friendly nations, but Trump is no ordinary president. Just two days after the UK parliament formally granted Johnson’s request for an early (December) election, Trump called into a London radio show hosted by the flamboyant Brexit Party founder Nigel Farage. The president did not hold back. He lambasted the Labour leader Jeremy Corbyn as being “so bad” for Britain, heaped praise upon Johnson, calling him “a fantastic man,” and urging Britain to leave the EU in such a way as to facilitate a swift UK-U.S. trade deal.

Trump also outlined his hope that Johnson and Farage would “get together” and reap the political benefits of pooling their electoral support. (When Trump made his remarks, the combined support of the Tory and Brexit parties stood at around 50 percent of the likely electorate). At the time, Farage was refusing to enter into an electoral pact with the Tories because Johnson was campaigning on a platform of retaining significant political and economic ties with Brussels even after Britain formally withdraws from the EU, something that hardliner Brexiteers like Farage regard as an utter betrayal of their cause.

Two weeks after Trump’s intervention, however, Farage dramatically announced that his party would not stand candidates against any incumbent Tory members of parliament (MPs). This was widely viewed as a major boost to Johnson’s chances of winning a majority, given that the Brexit Party invariably competes for the same right-wing, pro-Brexit voters as the Conservatives.

Why did Farage agree to give the Conservatives such a gift? Farage claims that Johnson promised him something in return for not trying to unseat Tory MPs: a so-called “Canada-style” relationship with Europe, which would mean a free trade deal but no political (or customs) relationship to speak of. This is exactly the sort of Brexit deal that Trump is angling for. But it is emphatically not the sort of Brexit deal that Johnson negotiated just one month ago.

Farage’s claims raise some important questions. Is the prime minister planning to ditch his plans for a phased withdrawal from the EU and instead pursue a decisive “hard Brexit” along the lines encouraged by Trump? Or is Farage simply inflating his own importance and trying to cover for the fact that his party has stood down candidates in 317 seats (districts) without getting anything in return? Although the latter explanation is probably more likely, the former is not unthinkable.

Whatever the truth, the perception of a Trump-orchestrated Johnson-Farage pact is something that Johnson ought to feel very uneasy about. The problem is that Trump is a desperately unpopular figure in the British press and among the public at large, alternately regarded as a vulgar buffoon and a dangerous far-right demagogue. Small wonder, then, that Labour’s Jeremy Corbyn is using every opportunity to conjure the image of a Trump-Johnson-Farage “alliance” that poses a serious threat to British democracy.

One of the most potent criticisms of Johnson’s closeness to Trump and Farage is the suggestion that the three leaders are conspiring to use Brexit as a catalyst for dismantling Britain’s welfare and regulatory state. In particular, the British press has been captivated by the idea that a future UK-U.S. trade deal would see Britain’s state-run National Health Service (NHS) forced to pay higher rates for US-manufactured drugs, instead of continuing to benefit from the statutory price caps that are currently in place. A more sensational claim is that the NHS would be privatized altogether if Trump gets his way. These are incendiary claims in a country where the NHS is a cherished institution.

Their backs against the wall, Labour Party strategists would like nothing better than to turn this election into a fight to save the NHS from a right-wing invasion from across the Atlantic Ocean. This would place the party on its home turf and allow Corbyn to unite a broad cross-section of the country around a shared love for the NHS and hatred of Donald Trump.

Running against Donald Trump might even be enough to put Corbyn in 10 Downing Street, although the odds of this happening should not be overestimated. One thing to remember is that to become prime minister, Corbyn doesn’t need to win a majority. All he needs to do is deny Johnson a majority—which is exactly what Corbyn did to Theresa May in 2017. If neither the Conservatives nor Labour can govern alone (a “Hung Parliament” situation), the premiership will go to whichever leader can assemble a formal or informal coalition of parties to back his candidacy.

In such an event, Johnson’s only potential ally will be the hardline Democratic Unionist Party, who propped up May after her 2017 catastrophe. (It seems very unlikely that the Brexit Party will gain any MPs because their electoral support is too diffuse). Corbyn, on the other hand, could conceivably count upon dozens of MPs from several different left-of-center parties to help keep the Tories out of office: the Scottish National Party, Liberal Democrats, Plaid Cymru (the Party of Wales), Greens, and Social Democratic Labour Party. He might, therefore, stand a better chance of forming a government.

This might be something of a far-fetched scenario, to be sure, but with Corbyn as prime minister, it would be a very real political possibility. In no small measure, Boris Johnson has Donald Trump to thank for that. After all, it would not be the first time that a political ally of Trump’s has asked: With friends like this, who needs enemies?