Ukraine Should Not Be a Member of NATO 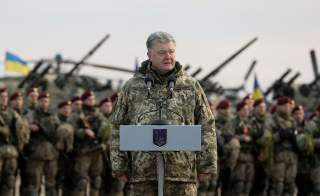 Another day, another crisis in the relationship between Russia and Ukraine—and another powerful reminder why the latter should not be inducted into NATO. Washington has nothing at stake worth going to war over who has access to the Sea of Azov.

The latest confrontation between Moscow and Kiev occurred when Russian vessels blocked Ukrainian vessels from moving into the shallow body of water between the two nations through the Kerch Strait. Kiev charged that Russia prevented lawful passage of its ships and instituted an illegal blockade. Moscow, in turn, claimed that the Ukrainians entered illegally and engaged in “aggressive” maneuvers. A Russian gunboat shot up a Ukrainian vessel, injuring several sailors.

Full-scale war is possible. Both sides had been increasing military forces in the region. Although Russian president Vladimir Putin does not appear to be stoking nationalist fires at home, Ukrainian president Petro Poroshenko is an underdog for reelection and might benefit from a crisis. The latter called a war cabinet meeting, warned of possible conflict, and instituted martial law (which would allow postponing the election). The Rada is considering declaring a state of war with Russia. Demonstrators have taken to Kiev’s streets.

The Putin government, which has harassed Ukrainian marine traffic entering what is essentially an enclosed sea, looks mostly to blame. Moscow’s aggressiveness might be a negotiating tactic or part of a campaign to turn the Sea of Azov into de facto territorial waters.

Still, Moscow is not without security concerns. The Kerch Strait Bridge is a possible target. Indeed, in May Washington Examiner columnist Tom Rogan argued that “Ukraine should now destroy elements of the bridge. While that course of action would be an escalation against Putin and one that would almost certainly spark Russian retaliation, this bridge is an outrageous affront to Ukraine's very credibility as a nation.” Worse, Rogan declared: “The U.S. could and should support Ukraine here with confidence in our own military power.” Even if an election-minded Poroshenko eschews taking such a risk, nationalist and neo-fascist militias might not be so restrained.

So far the crisis is contained. The UN Security Council met but will take no action with Russia as a member. Poroshenko requested support via tweet: “We appeal to the partner countries under the Budapest Memorandum, to the EU countries, to participants of the Normandy format in order to coordinate effective measures to protect Ukraine. We appeal to the whole pro-Ukrainian coalition: we must stand united!”

That’s quite a list. It includes, respectively, the United States and United Kingdom, most of Europe, and France and Germany. However, if one thing is certain, it is that the continent will do nothing. The EU did issue a statement: “We expect Russia to restore freedom of passage at the Kerch Strait and urge all to act with utmost restraint to de-escalate the situation immediately.” But most European governments aren’t particularly interested in defending themselves. They certainly won’t launch a glorious crusade on behalf of Ukraine, which they won’t admit to either the EU or NATO.

America is the only nation on that list that matters. Washington would be expected to do the heavy lifting in any war that includes Moscow, handle the nuclear exchange, conduct the air war, resupply the allied combatants, clear the seas, manage the ground campaign, and take the casualties. The UK and France would help out. Poland would contribute. Everyone else would offer advice and hope that Russia fired its weapons over them toward North America.

This should remind us that we are lucky (or blessed) President George W. Bush failed in his effort to add Kiev (and Georgia) to NATO. Had he succeeded Washington would have been obligated to come to Ukraine’s defense if it invoked Article 5 against Moscow. Backed by the United States, Kiev would have been much more likely to take a belligerent approach toward Russia. Poroshenko would have advanced his reelection prospects and possibly triggered the sort of war that only offers the possibility of reclaiming Crimea.

While alliances deter, they also ensnare. If war breaks out, then Washington is automatically involved. And war becomes more likely when governments believe they can borrow the U.S. armed forces for their own purposes, which makes them more reckless.

It is fine to be “pro-Ukrainian,” as Poroshenko put it. Russia’s various assaults on Ukraine were wrong. However, there is no cause for Washington to go to war. First, Kiev is of little security interest to the West. Ukraine suffered as part of the Russian Empire and Soviet Union, without any meaningful impact on America or Europe. Ukraine’s current travails are unsettling but not threatening to anyone else.

Moreover, Kiev, the Europeans, and America are hardly blameless. Ukraine is no beau ideal of democracy. Moreover, years after backing a “color revolution” in Kiev (which made the disastrous incompetent Viktor Yushchenko president), Washington and Brussels cheerfully encouraged a street putsch against the elected though flawed leader who leaned toward Russia. U.S. officials unashamedly talked about who they wanted to take over as Ukraine’s prime minister. Ukraine’s economic orientation toward Europe and membership in NATO was supposed to follow. That didn’t warrant war by Moscow, but Washington would have taken, shall we say, a dim view if the situation was reversed and Russia intervened in Mexico, installing its preferred leaders and pushing the country toward membership in the Warsaw Pact.

Needed is a general settlement covering Ukraine and Georgia. Crimea won’t go back to Ukraine without Moscow’s defeat in war. Russia is unlikely to stop stirring the pot in Ukraine’s Donbass region so long as NATO membership is a formal objective. The statement would serve as a strategy to bring peace and stability, if not liberalism and democracy, to that part of the world.

The allies close NATO’s doors and drop sanctions, without formally recognizing Crimea’s annexation. Russia ends its support for Ukrainian separatists and halts other destabilizing activities, such as interfering with Ukrainian shipping entering the Sea of Azov. Georgia and Ukraine lean however they wish culturally, economically, and politically, but abandon efforts to become a Western military tripwire. No one is happy. Everyone prospers with the result.

Weirdly, the one policy that appears to unite anti-Trump liberals and neoconservative hawks centers around Russia. Both are intent on making Moscow an enduring enemy, with no gain for America. At times this bizarre alliance appears to wish it could launch the first missile targeting the Russian Federation. If Kiev was a NATO member, then the bipartisan war hawks just might have gotten their chance.

NATO has outlived its usefulness. It risks dragging America into an unnecessary war in which most European allies would do little more than watch. Getting out is more complex than getting in. In the meantime, Washington should stop adding to it new members that are security liabilities. The Trump administration should instead focus on engaging in serious negotiations to end the neo-Cold War that has developed between Washington and Moscow.