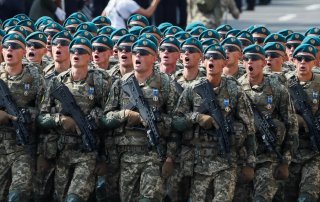 Having Ukraine as a de facto “ally” should make Washington increasingly uneasy.  The United States has portrayed that country as a peaceful Western democracy striving to defend its territory and independence from an allegedly rapacious Russia.  In his April 2 telephone call to Ukraine’s president, Volodymyr Zelenskyy, President Joe Biden “affirmed the United States’ unwavering support for Ukraine’s sovereignty and territorial integrity in the face of Russia’s ongoing aggression in the Donbas and Crimea.  He emphasized his administration’s commitment to revitalize our strategic partnership in support of President Zelenskyy’s plan to tackle corruption and implement a reform agenda based on our shared democratic values that delivers justice, security, and prosperity to the people of Ukraine.”

The key assumptions undergirding U.S. policy toward Ukraine are faulty.  Burgeoning authoritarianism rather than a commitment to democracy marks Kiev’s internal governance, and the country’s foreign policy is alarmingly bellicose toward its much larger, more powerful neighbor. Ukraine is both an unworthy and dangerous partner for the United States.

Zelenskyy’s government not only has perpetuated the pervasive corruption that has plagued Ukraine since independence, but it is also intensifying policies that undermine basic civil liberties.  Zelenskyy and his supporters contend that restrictive measures are needed to thwart Russia’s subversion efforts, but targets now include classical liberal factions that have no plausible connection to the Kremlin.  U.S. leaders face the prospect of backing a thinly disguised autocracy rather than a democratic government.

Although Ukraine’s domestic trends are troubling, far more worrisome is the leadership’s jingoistic rhetoric and policy positions regarding Kiev’s relations with Moscow.  That development should be more than a matter of academic concern for the United States.  Even though Ukraine is not a member of NATO, and Congress never has been asked to approve any agreement (much less a formal treaty requiring a two-thirds vote of the Senate) by treating Kiev as an official U.S. ally, American officials clearly regard the country as an important political and security partner.  The Trump and Biden administrations have approved multiple arms sales to Kiev, U.S. personnel have trained Ukrainian troops, and U.S. forces (along with units from other NATO countries) have conducted joint military exercises (war games), with their Ukrainian counterparts on several occasions.  In short, U.S. leaders treat Ukraine as a full-fledged, albeit de facto, ally)

However, Kiev is not really an ally; it is a weak U.S. security dependent that has markedly hostile relations with Russia.  But Ukraine’s leaders are not deterred by their country’s military limitations.  In late August, Ukraine held its first military parade in several years, celebrating the 30th anniversary of its independence, and declared that it would reclaim both Crimea, which Russia annexed in 2014, and territories in the eastern Donbas region that are under the control of Kremlin-backed separatists.  The country’s official defense strategy document adopted in March explicitly includes those goals.

Moreover, the objective appears to be more than rhetorical.  In the spring of 2021, Kiev began to deploy troops and tanks near Crimea for military drills.  Russia responded with some large-scale troop movements of its own, and a military crisis that had the potential to embroil the United States and NATO simmered.  Fortunately, cooler heads prevailed and both sides began to back down, but Crimea and the adjacent area remain worrisome flashpoints.

Ukraine is engaging in such behavior while expecting the United States and NATO to back its bid.  In August, Zelenskyy spoke at the inaugural summit of the “Crimea Platform,” a meeting of representatives from forty-six countries that Kiev had orchestrated to generate greater international pressure on Russia.  The emphasis at the summit was on increased diplomatic support for Ukraine, accompanied by tougher sanctions against Russia, to compel Moscow to reverse its annexation of Crimea.  But the Ukrainian leader argued that it was also a security issue.  He asserted that “the occupation of Crimea calls into question the effectiveness of the entire international security system…”

Ukrainian officials contemplate more than allied diplomatic backing in their campaign to confront Russia.  In April, Zelenskyy stated explicitly that the only way to end Russian “aggression” in the Donbas, much less reverse Moscow’s annexation of Crimea, would be to give Ukraine membership in NATO.  But such a step would be extraordinarily dangerous.  Kremlin officials have made it clear on multiple occasions that NATO membership for Kiev crosses a red line in terms of Russia’s security and will not be tolerated.  Ukraine in NATO also means that the United States would be obligated under Article 5 of the North Atlantic Treaty to come to Kiev’s defense.  It would be simplicity itself for Ukraine to exploit a military incident and charge that it was an act of Russian aggression.  Indeed, Ukrainian leaders contend that the annexation of Crimea and Moscow’s support for Donbas insurgents already constitute acts of aggression.

Continued U.S. backing for Ukraine’s unrealistic territorial ambitions is unwise and dangerous while backing Kiev’s bid for NATO membership, which every U.S. administration beginning with George W. Bush’s has done, is even more reckless.  Treating Ukraine as an ally creates serious and growing perils for the American people. The only thing worse than a weak, vulnerable security client, is a weak, vulnerable client that seeks to pursue an aggressive policy that it cannot possibly sustain with its own military resources, and instead expects backing from its powerful benefactor.  In 1914, Serbia entangled Czarist Russia in its reckless ambitions and triggered a massive conflict that destroyed its patron and so much else.  Given Kiev’s behavior, Ukraine could become the Serbia of the 2020s.  The Biden administration must not replicate the Czar’s folly and fall into such a trap.  Washington should cut Ukraine loose and let it fend for itself.

Ted Galen Carpenter, a senior fellow in defense and foreign policy studies at the Cato Institute and a contributing editor at the National Interest, is the author of 12 books and more than 950 articles on international affairs.